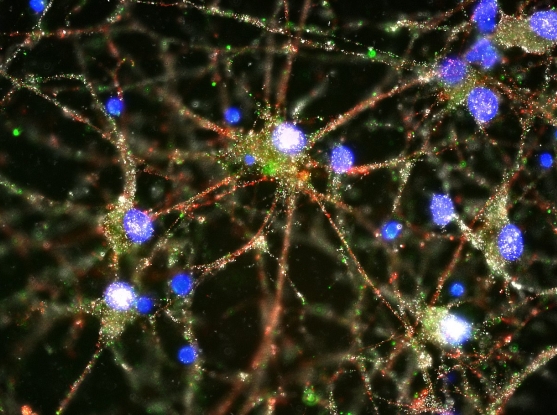 C4 localization at the synapse
By Leah Eisenstadt

Schizophrenia is a mysterious and devastating disorder that afflicts one percent of the adult population worldwide. Its symptoms — hallucinations, emotional withdrawal, and cognitive impairment — are chronic and typically emerge just as individuals are entering adulthood. Today’s medications treat just one of these symptoms (psychosis); treatments for the underlying disease and its many other symptoms have been hard to develop, because no one really understands what causes the disorder.

During the past decade, scientists at the Broad Institute of MIT and Harvard and elsewhere conducted large-scale genome-wide association studies uncovering more than 100 regions of the genome in which genetic variation associates with risk of schizophrenia. One of these regions emerged as containing the strongest genetic influence on the disorder; it was particularly intriguing because it contained hundreds of genes with roles in the immune system. But it was unknown which gene or genes, and therefore which biological processes, gave rise to the genetic signal.

“The mystery has been, what aspect of human biology generates this strong genetic effect?” said Steven McCarroll, director of genetics for the Stanley Center for Psychiatric Research at Broad Institute and an associate professor of genetics at Harvard Medical School who studies how genome variation shapes human biology. “These have been challenging problems to solve because they require new combinations of genetics, biology, and math.”

Reporting in Nature, McCarroll and his collaborators describe a solution to this mystery. The result of scientific creativity, close collaborations, and transformative funding at the Stanley Center, the bold effort revealed that the signal results from a previously unsuspected gene for an immune protein that has another job in the brain: mediating a critical process by which connections between neurons are eliminated in the developing brain. The finding offers novel insights that may reignite schizophrenia research by implicating specific molecules and cellular events in this disorder for the first time.

Solving a genetic mystery with a new analytical playbook
McCarroll and members of his lab several years ago set out to unravel what had seemed to be an intractable problem. The perplexing genetic signal lay in a region of the genome known as the major histocompatibility complex (MHC) locus, which is densely packed with hundreds of highly variable genes, many of which have immune functions. Researchers had previously suspected that the responsible genes were likely in the category of “HLA” genes, which help the immune system identify invading viruses and bacteria.

McCarroll’s group, however, noticed clues that pointed to the genes for a different set of immune factors known as complement components — a collection of molecules long known to mark pathogens for destruction by immune cells, and more recently found to similarly mark synapses, the connections between cells in the brain, for elimination. Scientists had previously observed reduced numbers of synapses in brain tissue from deceased patients with schizophrenia, and patients often exhibit thinning of the outer layer of the brain (cortex) due to loss of synapses.

The genetic signal harbored unusually complicated mathematical patterns of association to disease risk, so traditional means of uncovering causal genes were not working. “That’s why we started to think about unconventional kinds of genetic variation,” said McCarroll.

Instead of an HLA gene within the MHC region, the group zeroed in on the complement component 4 (C4) genes, which appeared to show a dizzyingly complex form of variation that had been studied, but not yet been well characterized as they related to surrounding genetic variation in the context of large sample sizes, making them a rare blank spot on increasingly complete maps of the human genome. Different people’s genomes appeared to have widely different numbers of copies of these genes, and to have different forms (C4A and C4B). The challenge was that no methods existed to measure this type of variation. So Aswin Sekar, an M.D./Ph.D. student in McCarroll’s lab, began designing molecular experiments to do so.

Sekar, who was at the time just 24 years old and beginning graduate school, took on a big challenge — a problem that had daunted human geneticists for years. “Back in 2011, I remember thinking that this was a pretty risky project,” said Sekar. His advisor McCarroll reassured him that even if C4 didn’t influence schizophrenia, the new research tools would be hugely valuable for other scientists, providing ways to analyze hundreds of other genes in the genome that harbor similarly complex kinds of variation.

Sekar began by decoding what C4 “structures” — combinations of C4A and C4B genes — people have. He found more than a dozen different forms of this part of the genome. Some common forms, for example, have many C4A genes; others have only C4B genes; others have both. The genes were so variable that any two individuals were unlikely to have the same form. Sekar and his colleagues in McCarroll’s lab showed that this variation profoundly affected how much C4A and C4B protein is produced in different individuals’ brains.

The key question was whether such variation shaped risk for schizophrenia. Scientists had recently pooled genetic data from nearly 37,000 schizophrenia patients and 113,000 controls from 20 countries (PGC, 2014). These data tracked only simpler forms of genetic variation — single-letter DNA changes known as SNPs — and not the more complex structural variants Sekar was finding at C4. But Sekar noticed that humans who shared a C4 structure tended also to share the SNPs around that structure — a relationship that reflects having inherited the whole segment from the same shared ancestor. He built a map of these relationships, defining “molecular barcodes” from the SNP patterns with which he could infer C4 structural forms. The map allowed the team to take advantage of SNP data in giant datasets from research around the world. “That turned a molecular biology problem into a big-data problem,” said McCarroll.

The pattern they observed was striking: the more any C4 variant promoted higher expression (activity) of C4A in brain tissues, the more common it appeared to be among schizophrenia patients. Further, the structural form of C4, rather than the pattern of SNPs surrounding it (there are many “barcodes” for each form of C4), determined its level of risk, offering strong evidence that structural variation in the C4 gene is in fact what gives rise to disease risk. In an additional test, they confirmed that the C4 gene was indeed more active in brain tissue from people with schizophrenia than in brain tissue from unaffected controls.

The data indicate that C4 underlies the complex signal at the MHC locus, an achievement made possible by the intrepid efforts of Sekar. “He was a really brave graduate student who thought differently about data that everyone in the field had been looking at for a long time,” said McCarroll. “He didn’t care that there wasn’t a playbook for doing this. He said, ‘Let’s write one,’ and that allowed him to solve the problem.”

With new clues about C4, the researchers were eager to explore the role of this immune molecule in the brain. Luckily, they found help in their own neighborhood.

An immune molecule’s new role in the brain
In a Boston Children’s Hospital lab around the corner from McCarroll’s lab, neuroscientist Beth Stevens studies the role of immune molecules in the developing brain and in disease. Although she didn’t study C4, Stevens had found that other complement factors mediate synaptic pruning in the mouse visual system during development, in a role similar to, but distinct from, the one they play in the immune system. Outside the central nervous system, these molecules help contain infection by tagging bacteria for removal by “phagocytic” cells — cells that are good at swallowing other cells and debris. In the brain, complement proteins tag synapses for removal by microglial cells, helping to shape neuronal circuits in the developing brain.

After discussing the preliminary C4 findings over coffee, McCarroll and Stevens began a close collaboration that continues today. “There had been a long-standing hunch that pruning was involved in schizophrenia, but it could never be formally tested until we had the genetic data on C4,” said Stevens, also an institute member of the Broad and assistant professor of neurology at Children’s.

The researchers first found that the C4 protein is present in human neurons and that it localizes to synapses, putting it in the right place to mediate pruning. But it was still unknown if C4 determined how many synapses are pruned.

The group again found expertise and collaboration in their own neighborhood. Mike Carroll, a professor at Harvard Medical School and researcher at Children’s, had made many earlier discoveries about roles of C4 in the immune system and had developed mice that lacked the C4 gene. Researchers from the three labs worked closely together to study these mice, finding that mice lacking the C4 gene undergo reduced levels of synaptic pruning. The results provide direct evidence that C4 plays a key role in this process in the developing brain.

The C4 findings reinforce the growing understanding that elements of the immune system are not necessarily in the brain because of injury or infection, but as part of normal developmental processes. “The same proteins are doing one thing in the periphery for immunity, and another thing in the brain,” said McCarroll. “It’s a clever way nature reuses the same molecules for different jobs.”

The findings suggest that excessive complement activity — and very likely, excessive or prolonged synaptic pruning — is a key event in the development of schizophrenia, which could explain the loss of synapses observed in the brains of patients.

The findings may also address another longstanding mystery about schizophrenia, its tendency to appear in late adolescence and early adulthood. Because cortical regions of the brain normally undergo intense synapse elimination at this age, this mechanism may also explain why symptoms seem to appear then.

Testing those hypotheses will keep McCarroll, Stevens, and Carroll busy for years to come. The scientists aim to develop mouse models based on the human C4 variants, to explore the role of C4 in pruning in the human brain, and to test whether pruning plays a role in other neurological disorders.

A risky scientific bet pays off
In addition to offering unprecedented insight into the causes of schizophrenia, the results offer exciting therapeutic possibilities. C4 or another molecule involved in synaptic pruning could one day be a therapeutic target or used diagnostically as a biomarker for schizophrenia; in principle, such approaches might address a root cause of schizophrenia rather than a single symptom, as today’s drugs do. Moreover, researchers will not need to start from scratch: because of the complement pathway’s well-known role in the immune system, they can build on years of earlier work.

“This study is exciting because it’s opened up new avenues of research for our labs and others,” said Stevens, who credits much of the effort’s success to collaborative opportunities within the Stanley Center. “The teamwork has been really fun. That’s what science should be like. That’s why we do what we do.”

Stanley Center Director Steven Hyman explained that catalytic and generous funding from the late Ted and Vada Stanley in support of psychiatric research has enabled the scientists to embark on this bold effort without waiting for funding from traditional sources. “Through philanthropy, we are able to take bets on risky science with potentially transformative results,” Hyman said.

The effort’s success illustrates the power of genomic analysis to reveal biological insight, McCarroll explained. “Our hope has always been that through genetics, we’d find true drivers of schizophrenia, and not just of one symptom,” he said. “It’s exciting to think about the possibility that we might one day address therapies to this pathway, because that would be a truly novel way to treat or prevent the illness.”