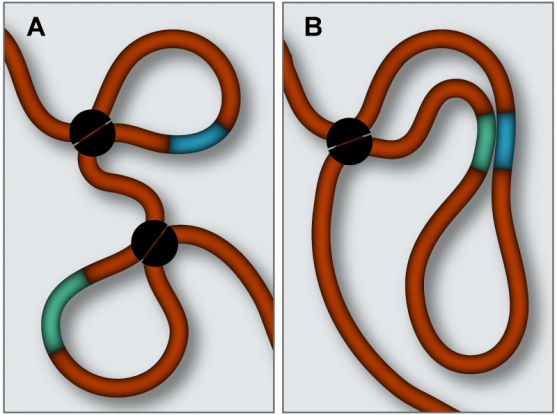 In a landmark study, researchers from the Broad Institute and Massachusetts General Hospital reveal a completely new biological mechanism that underlies cancer. By studying brain tumors that carry mutations in the isocitrate dehydrogenase (IDH) genes, the team uncovered some unusual changes in the instructions for how the genome folds up on itself. Those changes target key parts of the genome, called insulators, which physically prevent genes in one region from interacting with the control switches and genes that lie in neighboring regions. When these insulators run amok in IDH-mutant tumors, they allow a potent growth factor gene to fall under the control of an always-on gene switch, forming a powerful, cancer-promoting combination. The findings, which point to a general process that likely also drives other forms of cancer, appear in the December 23rd advance online issue of the journal Nature.

“This is a totally new mechanism for causing cancer, and we think it will hold true not just in brain tumors, but in other forms of cancer,” said senior author Bradley Bernstein, an institute member at the Broad Institute and a professor of pathology at Massachusetts General Hospital. “It is well established that cancer-causing genes can be abnormally activated by changes in their DNA sequence. But in this case, we find that a cancer-causing gene is switched on by a change in how the genome folds.”

When extended from end to end, the human genome measures some six and a half feet. Although it is composed of smaller, distinct pieces (the chromosomes), it is now recognized that the pieces of the genome fold intricately together in three dimensions, allowing them to fit compactly within the microscopic confines of the cell. More than mere packaging, these genome folds consist of a series of physical loops, like those of a tied shoelace, that bring distant genes and gene control switches into close proximity.

By creating these loops — roughly 10,000 of them in total — the genome harnesses form to regulate function. “It has become increasingly clear that the functional unit of the genome is not a chromosome or even a gene, but rather these loop domains, which are physically separated — and thereby insulated — from neighboring loop domains,” said Bernstein.

But Bernstein’s group did not set out to study this higher-order packing of the genome. Instead, they sought a deeper molecular understanding of glioma, a form of brain cancer, including the highly aggressive form, glioblastoma. Relatively little progress has been made in the last two decades in treating these often incurable malignancies. In order to unlock these tumors’ biology, Bernstein and his colleagues combed through vast amounts of data from recent cancer genome projects, including the Cancer Genome Atlas (TCGA). They detected an unusual trend in IDH-mutant tumors: When a growth factor gene, called PDGFRA, was switched on, so was a faraway gene, called FIP1L1. When PDGFRA was turned off, so, too, was FIP1L1.

“It was really curious, because we didn’t see this gene expression signature in other contexts — we didn’t see it in gliomas without IDH mutations,” said Bernstein.

What made this signature stand out is that the two genes in question sit in different genomic loops, which are separated by an insulator. Just as the loops of a tied shoelace come together at a central knot, two insulators in the genome bind to one another, forming a loop. These insulators join together through the action of multiple proteins, which bind to specific regions of the genome, called CTCF sites.

Bernstein and his team were surprised to find that this strange phenomenon could be seen across the genome, involving many other CTCF sites and gene pairs, suggesting that IDH-mutant tumors have a global disruption in genome insulation. But how does this happen, and what role does IDH play?

IDH gene mutations signify one of the early success stories to flow from the large-scale sequencing of tumor genomes. Historically, IDH genes were thought to be run-of-the-mill “housekeeping” genes, not likely drivers of cancer — exactly the kinds of unexpected finds scientists hoped to uncover through systematic searches of the cancer genome.

Fast forward a few years, and the biology of IDH-mutant tumors remains poorly understood. IDH encodes an enzyme that, when mutated, produces a toxic metabolite that interferes with a variety of different proteins. Exactly which ones are relevant in cancer is unknown, but what is known is that the DNA of IDH-mutant tumors is modified in an important way — it carries an unusually large number of chemical tags, called methyl groups. The significance of this hypermethylation is not yet clear. “Based on the genome-wide defect in insulation that we observed in IDH-mutant gliomas, we looked for a way to put all these pieces of the IDH puzzle together,” said Bernstein.

Using a combination of genome-scale approaches, he and his colleagues found that the hypermethylation in IDH-mutant gliomas localizes to CTCF sites across the genome, where it disrupts their insulator functions.

Taken together with their earlier results, their work shows that PDGFRA and FIP1L1, which are normally confined to separate loop domains and rarely interact, become closely associated in IDH-mutant tumors — like untying a shoelace and then retying it in a new configuration. This unusual relationship emerges as a result of the hypermethylation at the intervening CTCF site.

“A variety of other tumors carry IDH mutations, including forms of leukemia, colon cancer, bladder cancer, and many others,” said Bernstein. “It will be very interesting to see how generally this applies beyond glioma.”

Although these early findings need to be extended through additional studies of IDH-mutant gliomas as well as other forms of IDH-mutant cancers, they offer some intriguing insights into potential therapeutic approaches. These include IDH inhibitors, which are now in clinical development, as well as agents that reduce the associated DNA methylation or target the downstream cancer genes.

“Basic science is often put in a separate bucket from translational or clinical science,” said Bernstein. “But here is an example of very basic, mechanistic science, done in a clinical context, that has taught us something remarkable about the basis of human disease.”