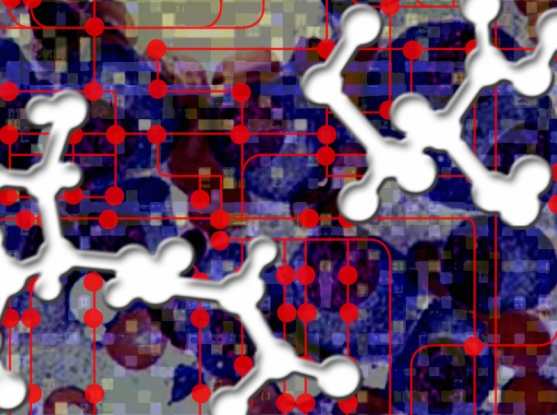 In the years since the human genome was first sequenced, a trove of genomic data has been amassed, aiding not only in our understanding of how the body works, but also in the search for disease-fighting drugs. Indeed, finding connections between idiosyncrasies within the genome and effective treatments is the hallmark of “precision medicine,” a growing movement that aims to target therapeutics to those who would most likely benefit from their use.

In this drug discovery effort, one of the most valuable pieces of information has been gene expression data – gene-by-gene analyses that reveal how the genetic code is being read in specific cell types. One way to use these data is to conduct screens using small molecular compounds-of-interest (which are “of interest” as potential drugs) and then to analyze them in context of vast databases that contain gene expression data, such as the Cancer Cell Line Encyclopedia, and others, such as the Cancer Therapeutics Response Portal (CTRP), that contain “chemical sensitivities” of cancer cell lines to small-molecule compounds.

This process has allowed researchers to compare patterns of sensitivities with patterns of basal gene expression. When correlations are detected, researchers can uncover new insights with implications for therapeutics and for the understanding of the inner workings of cancer cells. While this approach has been used the past, it has not been possible to apply it systematically.

This week in Nature Chemical Biology, Broad scientists provide a means to use the approach on a large scale and report on several specific insights that have already emerged. In both cases, the researchers work backward in a sense, using the correlations between the gene expression data and chemical sensitivity data to figure out how these molecules are working within cells. To use a police procedural analogy, the teams start from the point at which they have identified a person-of-interest (or, in this case, their compound-of-interest) using a “feature recognition” approach – matching key features in their person-of-interest against a vast database of individuals whose likenesses and modus operandi are known. From there, their case turns from a “whodunit” into a “howdunit”; what’s left for the detectives to figure out are means and motive – or, in scientific parlance, “mechanisms of action.”

One paper, led by co-senior authors Stuart Schreiber, Alykhan Shamji, and Paul Clemons of the Broad’s Center for the Science of Therapeutics, and postdoctoral associate and first author Matthew Rees (now a research scientist in the Broad’s Cancer Program), reports on a new resource that enables this type of study. Their Cancer Therapeutics Response Portal, which is open online to the scientific community, allows researchers to investigate correlations between basal gene expression – gene expression in cells during their resting state – and cell sensitivity data in order to make biological insights.

“Researchers have been using gene expression data to understand mechanisms of action for years now. It is a very powerful, very useful approach. The most common approach is based on perturbational gene expression – it has relied on measuring gene expression in response to a compound or some other perturbagen. Our resource enables the scientific community to find gene expression-compound connections using a new compound sensitivity dataset,” said Schreiber, who is also a Howard Hughes Medical Institute investigator, and the Morris Loeb Professor in the Department of Chemistry and Chemical Biology at Harvard University.

The 500 compounds currently included in the database include a mix of small molecules that have known, unknown, or partially known mechanisms-of-action. (Some, for instance, are known to act on a specific molecular target or pathway, but exactly how they affect the target isn’t clear.) For those 500 compounds, the resource makes it possible to find correlations among basal gene expression profiles for 900 cancer cell lines, looking across all 19,000 or so RNA transcripts for patterns of sensitivity. Most importantly, it also contains the algorithms needed to find these correlations.

“The portal could have been just the underlying data, but it would not have been as useful,” Rees says. “It took us years to work out the algorithms involved. What’s powerful with this version of the portal is that all the mathematical machinery is there. Researchers can enter what they’re looking for and push a button. We think that it’s a rich resource for the scientific community.”

The researchers tested a variety of compounds in part to validate that the resource worked, repeatedly finding correlations that pointed (appropriately) to compounds with previously recognized mechanisms of action. They also tested a small number of compounds with unknown mechanisms of action to gain new insights. Among these insights: the team uncovered a novel mechanism and potential new drug target. They investigated ML239, a small molecule previously discovered at the Broad, known to have a mysterious mechanism of action that allowed it to specifically target breast cancer stem cells, the small percentage of breast cancer tumor cells thought to drive the disease.

“We followed up on ML239 because we had always wondered, ‘How on earth would a compound selectively kill stem cells?’ So we ran it through our resource and to our surprise found that the compound activates a target that was on no one’s radar screen – the enzyme fatty acid desaturase,” Schreiber says. His team is currently working with other researchers at the Broad to determine what the enzyme might be doing in the context of cancer and whether it might be a potential drug target.

Initially, Meyerson’s team was conducting a screen, looking for a compound that might selectively attack cancer cells with mutations in TP53, the gene most commonly mutated in cancer. Once they found a promising candidate – a small molecule known as “DNMDP” – they looked for correlations within the available datasets in hopes of unearthing what the mechanism of action might be for the compound. To their surprise, the correlations they found weren’t related to TP53, but rather expression of PDE3A, a gene that had been known for its role in cardiac muscle and vascular smooth muscle regulation.

“We had the data on over 750 cell lines from the Cancer Cell Line Encyclopedia – including mutations, amplifications, and basal expression levels for every gene – and we combined that dataset with the new data on cell sensitivity to our small molecule in order to ask which genomic features correlate with sensitivity. That’s when we discovered PDE3A,” de Waal explains.

Since DNMDP is known to inhibit the protein produced by PDE3A, the team at first suspected that the compound’s effectiveness might be related to this inhibitory property, but further experiments showed no correlation between inhibition of PDE3A and cancer cell killing. At that point, de Waal teamed up with members of the Broad’s Proteomics Platform to closely analyze what was happening to the PDE3A protein when exposed to DNMDP. By examining the effects of DNMDP treatment on protein complex formation with PDE3A, they found that DNMDP induced PDE3A to bind a second protein, SLFN12. The group further showed that availability of SLFN12 was in fact required for cancer cell killing by DNMDP.

“Our hypothesis is that this small molecule acts to kill cancer cells through a downstream effect of bringing PDE3A and SLFN12 together,” says Greulich, who is an associated scientist at the Broad and lead scientist at Dana-Farber Cancer Institute. “Creating a complex between these two proteins is a completely new way of causing cancer cell death.” The team is now exploring the potential of developing a derivative of DNMDP into a cancer drug.

Meyerson, who is an institute member of the Broad and professor of pathology at Dana-Farber Cancer Institute, says such insights highlight the value of these new approaches.

“Together, these papers show how we can combine large-scale chemical sensitivity data and large-scale cancer cell line genomic analysis not only to find potential drug therapies, but also to illuminate the mechanisms by which these compounds are working. This is a new and powerful approach to discovering cancer drugs,” he says.