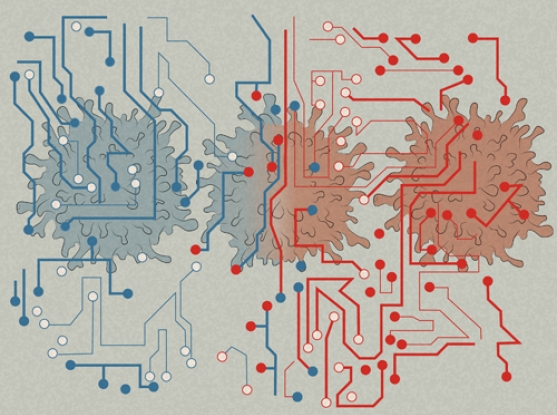 By looking at the cellular circuitry of immune cells one at a time, Broad researchers reveal underlying genetic heterogeneity that can sometimes lead to autoimmune disease. Image courtesy of Ania Hupalowska.
By Angela Page

Broad core member Aviv Regev thinks about the immune system as if it were an orchestra: “Some instruments need to play strong, others need to pull back or push forward. It all has to form a harmony and this harmony changes with time,” she said. “Everything has to know its role and it has to be orchestrated — except you don’t have a conductor.”

Instead, each element of the immune system — the individual T cells and all of the proteins they interact with, for instance — is guided by the actions of every other element. (Regev conceded that, “in this way it’s more like chamber music, maybe.”) In order to understand this system in detail, one must be able to tease out the unique characteristics of each cell. But until recently, investigative techniques only allowed for average analyses of groups of cells. That would be like trying to discuss Vivaldi’s Four Seasons without being able to distinguish between the violins and the violas, said Regev, Director of the Klarman Cell Observatory (KCO) and a professor of biology at MIT.

In collaboration with fellow senior scientists in the KCO Hongkun Park and, Vijay Kuchroo, the team used methods developed at the KCO to analyze individual Th17 cells. The work was published online this week, and will be featured on the cover of the December issue of the journal Cell.

Normally, Th17 cells are found in the gut where they are critical for maintaining tissue homeostasis and gut barrier functions, but when found in tissues like brain or skin their immune function can go awry and they can induce autoimmune diseases such as multiple sclerosis (MS) and Psoriasis. Getting this balance between necessary inflammation and unnecessary autoimmune pathologies right is important: “Imagine that you’re infected with a virus: it comes in and you have to amplify your T cells and make them very active — they have to divide, they have to attack. But what if you don’t know how to turn them off? You will become one big lymph node,” said Kuchroo, who is also Director of the Evergrande Center for Immunologic Diseases at Harvard Medical School and Brigham and Women’s Hospital.

That’s because T cells (which make up the bulk of the lymph nodes) proliferate “like crazy,” so we need a way to turn things off. “The aggressive phenotype serves a physiological purpose,” said Kuchroo, “but in some people the ability to turn it off is lost and that increases the risk of developing a whole list of diseases: MS, IBD, Crohn's, et cetera.”

Examining Th17 heterogeneity, one cell at a time 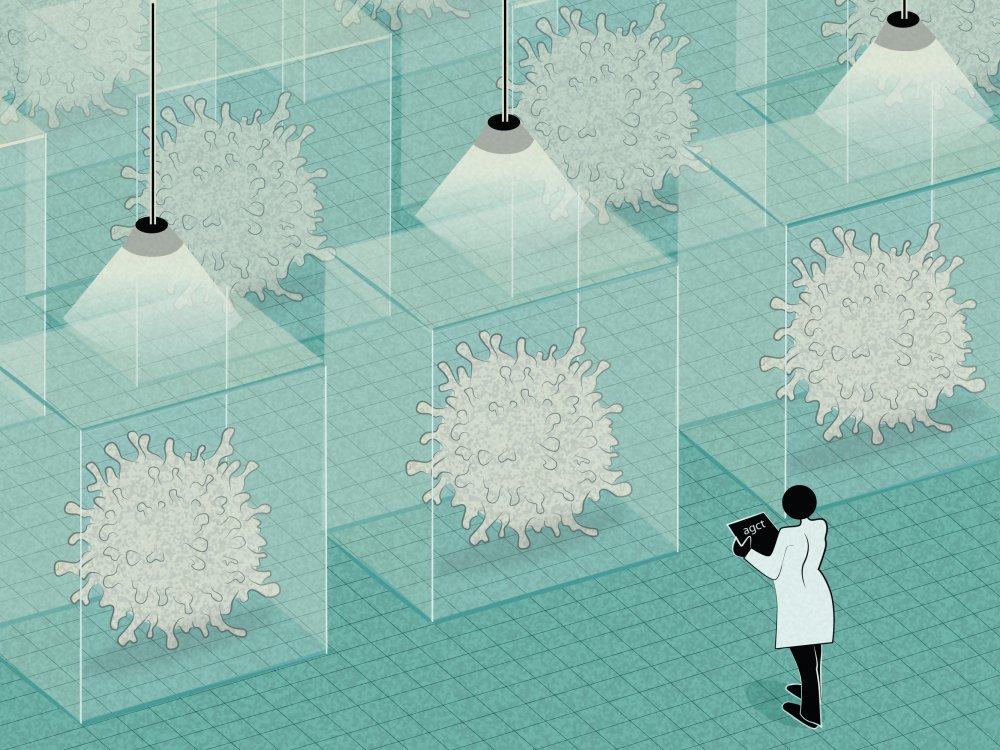 To uncover what molecular circuits drive this pathogenic potential of Th17 cells, Broad postdoctoral scholar Jellert Gaublomme drove an effort to examine Th17 heterogeneity, one cell at a time. Gaublomme and his colleagues used microfluidic devices to trap and analyze individual Th17 cells taken from the central nervous system (CNS) or lymph nodes of a mouse model of MS. The Th17 cells the team observed spanned a spectrum of cellular states, ranging from cells from the lymph nodes with self-renewal properties to pathogenic cells (like memory and effector cells isolated from the CNS).

“Importantly, the so-called ‘pathogenic’ state of these cells is not necessarily pathological in our bodies,” said Nir Yosef, co-first author and computational lead of the project, who was formerly a postdoctoral scholar in both the Regev and Kuchroo labs and is now an assistant professor at the University of California, Berkeley. “It becomes a pathology when it happens at the wrong time or in the wrong place.”

“Because the cells isolated in vivo are at multiple stages of differentiation, we wondered if the pathogenicity differences we observed were merely a reflection of these different differentiation stages,” said Gaublomme, who was a graduate student in the Park lab during the research and is now a member of the Regev lab. In other words, they wanted to know whether there were fundamental differences between the cells they observed, or if they were just at different stages of a single trajectory. To answer that question, the team followed up with cells grown in culture in the laboratory, of which they could control the start of differentiation and harvest cells at a specific time point throughout the process. By looking at the RNA content of individual cells, the team was able to see which genes are expressed in each. “Th17 cells grown in culture revealed that pathogenicity is not just a function of differentiation duration, but is guided by regulatory mechanisms that differ from general Th17 differentiation,” Gaublomme said.

“We found groups of genes that co-vary — that is they are either expressed together or tend to be mutually exclusive,” said Park, who is also a professor of chemistry and physics at Harvard University. One of these covarying groups, which consists of genes that are known to regulate pro-inflammatory behavior, were involved in the regulation of Th17 pathogenicity, either by driving it, or inversely, by dampening the pro-inflammatory response. This phenomenon allowed the team to tease apart the molecular differences that make some Th17 cells pathogenic and others protective. “That’s not a really complicated concept," said Park, "but we needed the right computational method to get there.”

The co-variation groups included genes that had previously been associated with tissue inflammation as well as many novel genes. “We used another computational method to prioritize them and focused on four of the top ranking genes,” said co-first author Youjin Lee, formerly a research fellow in the Kuchroo lab and now a postdoctoral scholar at the University of California at San Francisco. “In the paper, we show how novel genes contribute to Th17 cell pathogenicity, and how the absence of some of these genes will make mice resistant to the mouse model equivalent of MS,” she said.

Fat consumption may affect the activity of one novel gene 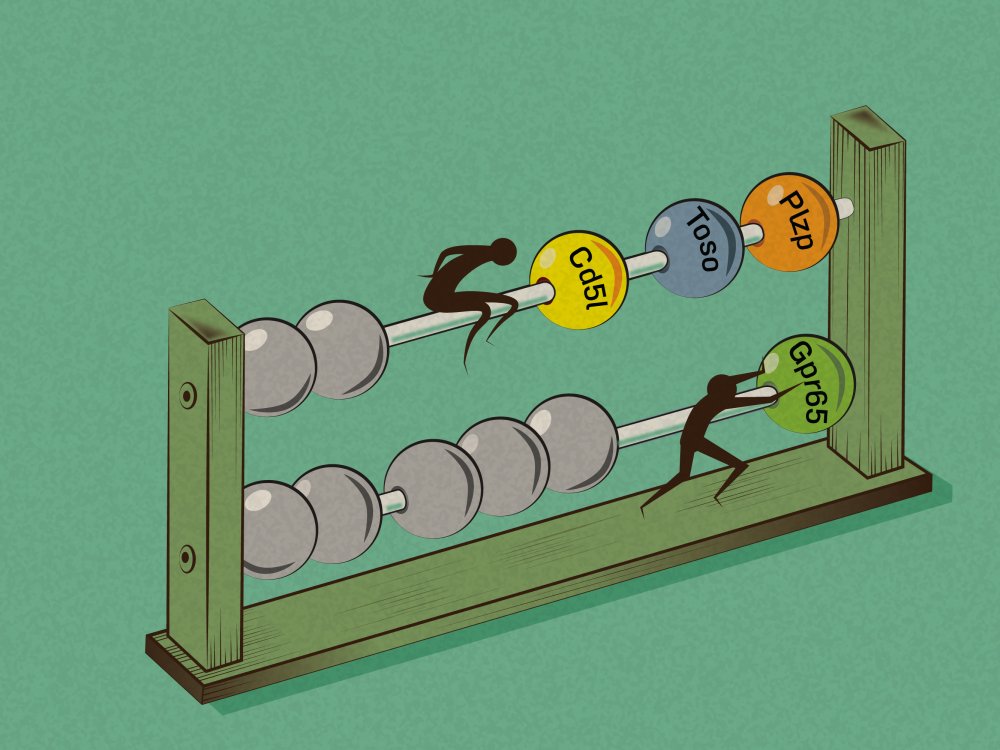 In a companion study, the team followed up on one of the genes revealed in the single-cell study. Image courtesy of Anna Hupalowska.

One of the genes the team identified, CD5L, became the subject of an entirely new study published alongside the initial paper. Led by first author Chao Wang, a postdoctoral scholar in the Kuchroo lab, the researchers pulled apart the biology of this one gene to understand the mechanism by which it can promote autoimmune disease. The results of the first study showed that CD5L is expressed in non-pathogenic cells but not in pathogenic ones, while this second study showed that the CD5L protein is a critical regulator for maintaining Th17 cells in the non-pathogenic state. It does this through a series of processes all associated with the lipid, or fat, composition of the cells.

CD5L had never previously been associated with T cells, but it had been shown to affect lipid biosynthesis. This would have been difficult for immunologists and genomic scientists to follow up on, but for the Broad’s Metabolite Profiling Platform it was a relatively straightforward task. The platform’s director, Clary Clish, and his team analyzed the lipid signatures of normal cells and of cells in which the CD5L gene had been turned off. The authors found that the balance between two different lipid families — polyunsaturated fatty acids (PUFA) and saturated fatty acids (SFA) — was altered in the cells without CD5L.

That got Wang thinking. “Th17 cells have a master regulator called Rorɣt which was known to be controlled by some kind of lipid-like ligand,” she said. “But Rorɣt was an ‘orphan’ nuclear receptor, and no one knew exactly what lipid controls it or how it does so.” When they “knocked out” CD5L, they found that the concentration of SFAs went up, while the concentration of PUFAs went down. This triggered the production of cholesterol, which had previously been revealed as a source of Rorɣt ligand. With more ligand around to bind it, Rorɣt gets turned on and initiates the synthesis of molecules associated with inflammation.

The team also changed the lipid balance of normal cells with intact CD5L and observed the same effect — the cells went rogue and became more pathogenic. Likewise, if the researchers restored the normal lipid balance of CD5L-null mice, their normal function was restored. These findings were corroborated by previous research from other scientists, which showed that mice fed a PUFA-rich diet had reduced severity of colitis and less pathogenic Th17 responses.

Taken together, the findings of this second paper show how CD5L is able to push or pull Th17 cells closer to or farther from a pathogenic state by modulating the fat balance inside the cell. As demonstrated in the first paper, CD5L is just one of several genes that work together and in concert with environmental factors to orchestrate a global immunological response to pathogens and can go awry, causing disease.

“You can’t ignore these things; they’re all wired together to create this harmony,” Regev said. A single off-key violin may not have a major impact on the overall symphony — it will be drowned out by other violins. “But if you have a lot of these subtler changes, all of a sudden it’s a cacophony,” she explained. The problem is much worse in the immune system, where all of the “violins” are talking to each other and changing their own behavior based on their neighbors’ actions.

“These observations may have a major impact in developing future therapies for human autoimmune diseases,” said Kuchroo. “For instance, we may be able to selectively inhibit pathogenic disease-inducing Th17 cells but spare the protective Th17 cells, like the ones that line the gut and maintain tissue barrier functions.”