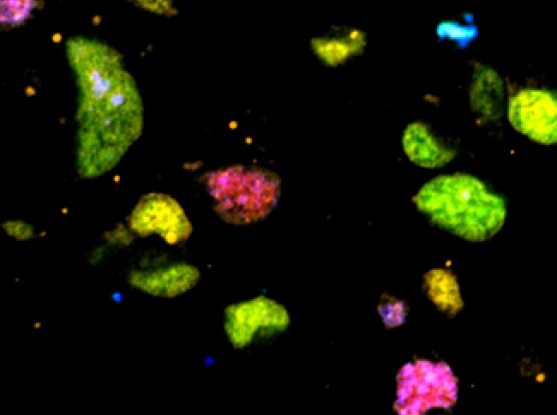 Researchers are finding that the cellular makeup of glioblastoma is more diverse than previously thought.

Scientists from the Broad Institute and Massachusetts General Hospital (MGH) have conducted a first-of-its-kind study that characterizes the cellular diversity within glioblastoma tumors from patients. The study, which looked at the expression of thousands of genes in individual cells from patient tumors, revealed that the cellular makeup of each tumor is more heterogeneous than previously suspected. The findings, which appear online in Science Express, will help guide future investigations into potential treatments for this devastating disease.

This is the first time a large-scale census of the individual cells residing in these brain tumors has been taken. Researchers were previously aware that the cells within a human tumor were not all the same – they could have different mutations in their genome and possibly express genes differently – and it is suspected that this diversity may contribute to drug resistance and disease recurrence. But until now, it had been difficult to quantify the extent of this diversity.

To chart such differences, the researchers used a relatively new approach called single-cell transcriptomics, which allowed them to look at gene expression patterns in each of 430 individual cells from five patients’ brain tumors. These patterns, which vary from cell to cell, show which genes are switched on and which are switched off in a given cell, revealing information about the cell’s nature and function.

Previous studies of glioblastoma looked at the average expression of genes across millions of cells, which were slurried together in a single sample. In some cases, this type of sampling is used to classify glioblastoma tumors into one of four recognized cancer sub-types, based on the gene expression program that is most prevalent. By examining the gene expression patterns of many individual cells, one at a time, the team was able to get a finer picture of the cellular composition of the tumors. Their study revealed that each glioblastoma tumor contains individual cells from multiple cancer sub-types, and that the distribution of these cells varies from tumor to tumor.

The study also found that the cancer cells in these tumors exist in many states. Some are stem-cell-like, suggesting they have the capacity to self-renew and may play a role in tumor regeneration even after therapy. Others are the more mature, differentiated cancer cells that make up the bulk of the tumor. But the researchers also found that many cells exist on a spectrum between these states. Existing treatments, which only target the most prevalent cells in the tumor, may miss some of these sub-populations.

“To focus on the aspects of heterogeneity that we thought could be clinically relevant, we looked primarily for distinct cell states, and found multiple sub-populations in each tumor. Clinically, what this means is that we might need to treat each tumor based on the complement of cellular sub-types it contains – not just the most prevalent one,” said co-senior author Aviv Regev. Regev is a Broad Institute core member and director of the Broad’s Klarman Cell Observatory, as well as an associate professor at MIT and an Early Career Scientist with the Howard Hughes Medical Institute.

The researchers hope that these findings will help guide future investigations and approaches to treatment for glioblastoma, which is the most common and most aggressive form of brain cancer in adults.

“This is an incurable disease. There are existing therapies that may target 99 percent of the cells, but the tumors always come back. Understanding the cellular landscape can provide a blueprint for identifying new therapies that target each of the various sub-populations of cancer cells, and ultimately for tailoring such therapies to individual patient tumors,” said co-senior author Bradley Bernstein. Bernstein is a senior associate member of the Broad and professor of pathology at Massachusetts General Hospital and Harvard Medical School. He is also an Early Career Scientist of the Howard Hughes Medical Institute and a principal investigator at the Broad’s Klarman Cell Observatory.

In addition to Bernstein and Regev, the study was led by co-first authors Anoop Patel and Itay Tirosh, who are postdoctoral fellows in the Bernstein and Regev labs respectively, and co-senior author Mario Suvà, an assistant professor of pathology at MGH and a Broad associated scientist. The team represented a path-forging partnership between physicians and researchers from MGH’s Departments of Neurosurgery and Pathology, and molecular and computational biologists at the Broad. The collaboration brought together neurosurgeons and pathologists at MGH, led by Patel and Suvà, who removed the tumors from patients and molecularly characterized the samples; Broad biologists, led by John Trombetta and Alex Shalek, who conducted the single-cell analysis; and a computational team, led by Tirosh, that analyzed the data.

The team anticipates that the method and collaborative model will be effective in characterizing other cancer tumor types. Efforts to study additional cancers using the same methodology are currently underway.

The study was funded by the Klarman Family Foundation, as well as the National Institutes of Health, Howard Hughes Medical Institute, the Burroughs Wellcome Fund, and the Harvard Stem Cell Institute.


About the Broad Institute of MIT and Harvard
The Eli and Edythe L. Broad Institute of MIT and Harvard was launched in 2004 to empower this generation of creative scientists to transform medicine. The Broad Institute seeks to describe all the molecular components of life and their connections; discover the molecular basis of major human diseases; develop effective new approaches to diagnostics and therapeutics; and disseminate discoveries, tools, methods and data openly to the entire scientific community.