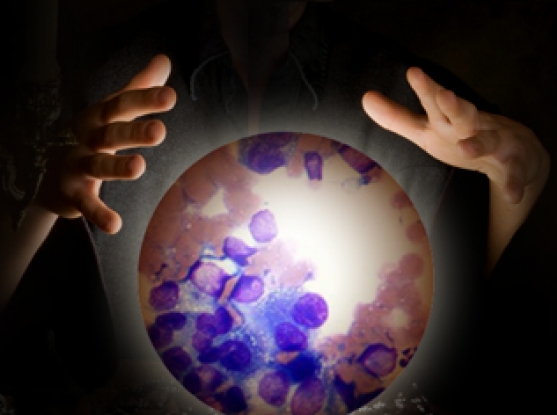 Research led by Broad senior associate member Levi Garraway and published this week in Nature offers a new approach to studying drug resistance in cancer. The approach helped them identify which biological pathways could be enabling melanoma to circumvent available anti-cancer treatments. Targeting the output of these pathways for treatment could potentially hinder the course of this often-fatal disease.

The researchers initiated the study to address a vexing clinical problem: on the rare occasions that drug treatments are found that effectively inhibit tumor growth, that success is often short-lived. As resistance mechanisms emerge, the therapies cease being effective and the tumors return.

Such is the case in melanoma. Roughly 50% of these cancers have been traced to a mutation in BRAF, a gene responsible for directing cell growth. Only a few years ago, drugs were developed that disrupt parts of the biological pathway that leads the mutation to spur unchecked growth in skin cells. Patients who have received the treatment have seen their tumors disappear – only to return an average of nine months later. Garraway's team, which includes researchers from the Broad Institute and Dana-Farber Cancer Institute, wanted to find out in a comprehensive fashion what mechanisms might be involved in the development of drug resistance in these cases.

To find out, the team systematically mimicked gene activation by expressing over 15,000 genes to test their role in drug resistance. (For scale, the human genome contains approximately 20,000 genes.) This large-scale screen was conducted using the Open Reading Frame (ORF) gene expression library developed by the Broad's RNAi Platform and Dana-Farber’s Center for Cancer Systems Biology. ORFs are pieces of genetic material that researchers can use to "turn on" specific genes in order to investigate their function.

"Each time we expressed a gene, we asked, 'Does this change the sensitivity of this cell line to these drugs?” explained Cory Johannessen, a postdoctoral researcher in Garraway’s lab and the paper’s first author. “Observing each response gave us a picture of what the landscape of resistance mechanisms looked like for this particular type of melanoma."

This systematic approach turned up a comprehensive list of mechanisms that could possibly play a role in the development of drug resistance. The team then looked for patterns in their data and found that they could, in fact, identify commonalities – entire signaling pathways or networks – from the functional information derived from their approach.

One of the team’s most promising findings was also one of the most surprising: a central pathway contributing to drug resistance in BRAF mutant melanoma is one that oversees an aspect of normal skin development.

"It turns out that the pathway that's causing the resistance isn't random,” Johannessen said. “It's a pathway that is essential to skin cell biology; it's critical to the development of those cells and their sustained growth."

One critical component of normal skin is a type of cell known as melanocytes; these cells create skin pigment and protect the body from damage from the sun’s UV rays. In contrast to the normal course of melanocyte development, the melanocyte development pathway is turned off in BRAF mutant melanoma, and a pathway triggered by the BRAF mutation takes over. Instead of producing normal melanocytes, the BRAF mutation causes a chain of events that leads to the activation of a group of proteins (known as “transcription factors”) that tell cells to reproduce uncontrollably, forming cancerous tumors.

While transcription factors have traditionally been viewed as “impossible” to target, the team suspected that they could hit them indirectly using chromatin-based therapeutics that are currently in clinical trials. These therapeutics target gene-regulating proteins in chromatin, which is one part of the cellular machinery that controls gene expression. In turn, these proteins modify the expression of a large number of other proteins in the cell.

When Garraway’s team tested a number of these chromatin-based therapeutics in cancer cells together with traditional BRAF mutant melanoma drugs, the combination did appear to head off drug resistance and reduced the expression of the transcription factors that had been driving resistance. The treatment has yet to be tested clinically, but if its inhibitory effects bear out, the therapy could potentially be used not only to treat BRAF mutant melanoma, but other forms of melanoma that involve the same transcription factors as well.

Garraway, who is also an associate professor of medicine in the Department of Medical Oncology at the Dana-Farber Cancer Institute and at Harvard Medical School, said that the systematic approach his team used to probe the mechanisms underlying drug resistance in BRAF mutant melanoma can be applied to other forms of cancer, and is already being leveraged in other cancer types. The approach is not only comprehensive, but also relatively cost-effective. It is also not reliant on large quantities of cancer tumor samples, the collection of which can be a burden on patients.

"This method enables us to track drug resistance much more systematically,” he said. “If we can identify and understand the mechanisms underlying drug resistance, we are in a better position to identify clinically relevant resistance mechanisms. We are hopeful that this information will help us design new therapies and drug combinations that lead to more durable control of melanoma and eventually many other types of cancer.”

New approach traces cancer's path toward drug resistance
What is an ORF?