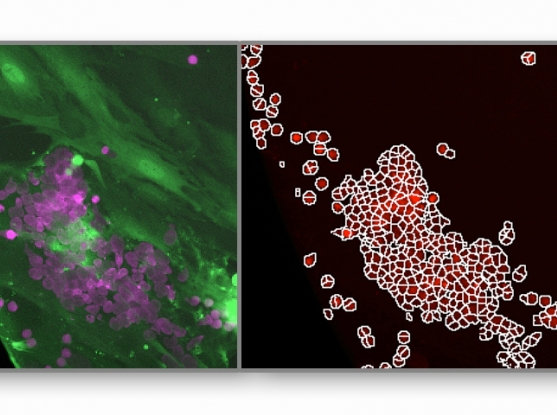 In many types of cancer, standard chemotherapy cures only a fraction of patients. Treatments are often too toxic to normal cells and they fail to selectively kill cancer’s stem cells, which can survive treatment and, like the queen bee of a beehive, give rise to new malignant cells.

Hunting for compounds that target the cancer stem cells of the blood cancer acute myeloid leukemia (AML) is now easier thanks to years of work by a collaborative team of scientists from the Broad Institute, Brigham and Women’s Hospital, Dana-Farber Cancer Institute, Massachusetts General Hospital, and Memorial Sloan-Kettering Cancer Center. As the team reports in Nature Chemical Biology, they built a new cell culture model that mimics AML in its niche in the bone marrow and makes the search for promising new drugs more effective.

The researchers used this more physiologic system to screen thousands of compounds, uncovering a subset that selectively kill leukemia cells and spare normal cells. The cholesterol-lowering drug lovastatin, used widely to reduce the risk of heart disease, was one such compound of interest. In addition to suggesting that statins and other compounds could pave the way to new cancer stem cell therapies, the work demonstrates the power of this approach to illuminate the underlying biology of cancer and its stem cells.

The traditional approach to screening compounds for anti-leukemic potential, in which “immortalized” cell lines are grown in a dish and exposed to various compounds, is hampered by these impediments. An ideal system would be one capable of screening thousands of compounds for those that kill leukemia stem cells and spare healthy stem cells, while overcoming the protective effects of the surrounding, so-called “stromal” cells. “Selectivity is really important in cancer therapeutics, and actually quite hard to come by,” said co-first author Kimberly Hartwell, a postdoctoral fellow in the laboratory of Broad core faculty member and Cancer Program director, Todd Golub, a co-senior author on the new study.

Their solution is a co-culture system that models the microenvironment of leukemia, mingling leukemia stem cells with stromal cells in tiny wells of a microplate. “Cancer stem cells don’t exist in isolation in the body,” said Peter Miller, a co-first author who completed his graduate thesis work with co-senior author Ben Ebert, an assistant professor at Harvard Medical School and a Broad associate member. “The cancer cells actually have a relationship with the seemingly normal cells around them. Leukemia cells can even hijack their normal neighbors and force them to create interdependence that they rely on.” The new system models that interdependence in an attempt to find ways to overcome it and selectively kill the cancer cells.

To enable high-throughput screening — or the ability to test thousands of compounds simultaneously — with the system, Hartwell, Miller, and their fellow researchers teamed up with the Broad’s Imaging Platform to build customized image analysis algorithms within the platform’s CellProfiler software. Previously, the growth and survival of leukemia stem cells had to be quantified by a trained researcher who would observe, by eye, the formation of “cobblestone areas” in each cell culture, created as cancer stem cells burrow beneath a single layer of stromal cells. The Imaging Platform’s new algorithms, now available to the broader scientific community, allowed this tedious process to be automated, enabling a large-scale search for new anti-AML compounds.

After using the new system to screen more than 14,000 compounds, roughly a dozen were found that inhibited malignant stem cells and overcame the protective effects of stromal cells, while sparing healthy stem cells in a related screen. Several of the compounds were already known to inhibit leukemic cells, bolstering the validity of the model. The researchers further showed that many of the compounds could not have been found through traditional screening in cell lines, suggesting that the compounds are exerting their effects through more physiologic biology modeled in the novel system.

One of the compounds highlighted in the screen is the cholesterol-lowering drug lovastatin, which, as part of a class of FDA-approved drugs, is an exciting finding to pursue. “For years, people have talked about statins and their possible utility in treating cancer,” said Hartwell. “Our assay had the capacity to reveal that leukemia stem cells are remarkably sensitive to statins.” Controversy exists in the literature as to whether statins can reduce cancer risk in patients taking them routinely for cholesterol reduction, she added, but one possibility is that this is simply a drug delivery issue. Statins work primarily in the liver, where cholesterol synthesis takes place, not in the bone marrow where AML lives. A statin engineered to enter the bone marrow could hold potential as a new therapy for leukemia.

The work was enabled by several groups at the Broad Institute, including the Imaging Platform and the Therapeutics Platform. “This was a Herculean effort, and was only feasible by having an image-based readout and access to chemical libraries and the expertise of our Broad colleagues,” Hartwell added. The effort also relied upon co-senior author Malcolm Moore of Memorial Sloan-Kettering Cancer Center, who examined primary human samples for validation of results from initial screens of mouse tissue.

This work was funded by grants from the Starr Cancer Consortium, the National Institutes of Health, and the National Science Foundation.