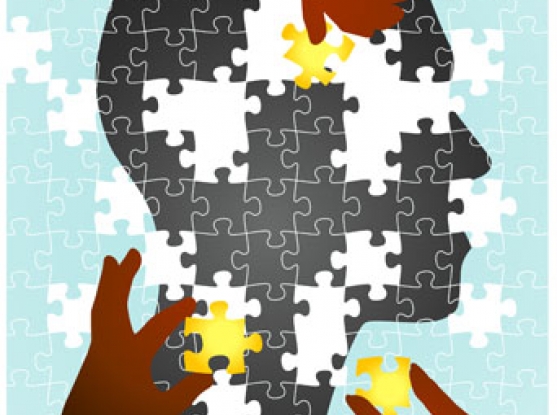 Piecing together the causes of autism.
By Veronia Meade-Kelly, Broad Communications

Autism spectrum disorders (ASD) are among the most heritable of all neuropsychiatric conditions. Yet, most genetic links to ASD found in recent years have involved de novo mutations, which are not passed from parent to child, but instead arise spontaneously. While these mutations help explain how ASD develops in a fraction of cases, they don’t help us understand why autism so often runs in families.

Two new studies by Broad Institute researchers are among the first to account for some of autism’s heritability. Both studies, which were published January 23 in Neuron, investigate the role recessive genes play in ASD. These genes can be passed on through generations, but their effects are seen only if an individual inherits two identical copies of the gene – one from each parent.

One study, led by Mark Daly, a senior associate member of the Broad and co-director of its Medical and Population Genetics program, found that approximately 5% of autism cases could be linked to inherited, recessive mutations that completely disrupt gene function. A second study, led by Broad associate member Christopher A. Walsh, found that autism risk could also be attributed to inherited mutations that resulted in only a partial loss of gene function. Moreover, Walsh’s team found that many of these partially-disabling mutations occurred in genes in which a complete disruption of the gene has been known to cause more severe or even fatal inherited diseases. This suggests that milder forms of some severe, Mendelian diseases – diseases caused by a single gene – may present as autism spectrum disorders.

Both teams used whole-exome sequencing in their investigations, allowing them to focus on the exomes, or the roughly 1% of the human genome that codes proteins, of several individuals.

Daly’s team scanned the exomes of roughly 1,800 autism cases and controls, looking for instances in which children inherited two broken copies of the same gene from their parents. Such “double knockouts” are relatively rare and are often disease-causing, since non-functioning genes are incapable of producing proteins needed by the body. The researchers found that double knockouts occurred in twice as many cases as controls, and estimated that those mutations could account for approximately 3% of autism risk.

Daly, who is also an associate professor at Harvard Medical School and Massachusetts General Hospital, said that the work helps define a specific genetic mechanism that explains some of autism’s heritability.

Walsh’s team found a separate mechanism that further helps to explain the role recessive inheritance plays in ASD. His team looked at the whole-exome sequencing data for 200 families in which children with autism had parents who were first cousins – a group whose shared ancestry would make it easier to identify recessive gene patterns. By comparing the genetic data of individuals or siblings with ASD with that of their healthy siblings and parents, the researchers were able to spot mutations suspected to be at play in the disease.

Many of the mutations they found caused only a partial loss of gene function, as opposed to the complete knockouts that Daly’s team studied. Interestingly, many of these mutations occurred in genes previously linked to more severe, Mendelian diseases. While complete loss-of-function in those genes would have caused the more severe Mendelian disorder, the partial loss-of-function mutations observed by Walsh’s team instead gave rise to ASD. For instance, some of the team’s subjects carried mutations in the gene AMT. Complete loss-of-function in that gene is known to cause nonketotic hyperglycinemia (NKH), a severe neonatal syndrome that typically leads to death within the first year of life. The team’s subjects had some, but not all, of the symptoms of NKH, in addition to ASD symptoms.

A similar pattern was found with other mutations identified by Walsh’s team; they found mutations in PEX7 (previously linked to rhizomelic chondrodysplasia punctate, or RCDP), SYNE1 (cerebellar ataxia), and VPS13B/COH1 (Cohen syndrome).

Walsh, who is also a professor of pediatrics and neurology at Harvard Medical School and chief of the division of genetics at Boston Children's Hospital, noted that the number of different genetic mutations uncovered by both his and Daly’s team supports the long-held theory in ASD research that autism is a heterogeneous condition with many different genetic causes. Mutations in hundreds, possibly over a thousand, different genes could potentially contribute to ASD.

Given this heterogeneity, Timothy Yu, a Broad researcher and first author on Walsh’s study, emphasized that that the sliver of autism accounted for by the particular genes identified in their study is very small.

“The important message from our study is that we found this category of partial loss-of-function mutations that contribute to some cases of ASD,” Yu said. “Now that we know that they exist we can try to figure out ways to look for them – in lots of genes, not just in the few that we found.”

“The specific genes that are found to be knocked out in these cases can provide key clues about the underlying biology of autism, and may generate hypotheses about ways to treat it,” he explained.

The Walsh lab and the Daly lab are now joining forces and intend to collaborate with other centers around the country that are sequencing the genes of children with ASD. They plan to pool the data from a larger number of patients and further explore the role of recessive mutations in autism.

Dr. Daly’s research was supported by funding from NIH.

Dr. Walsh’s research was supported by the NIMH, Simons Foundation, and the Howard Hughes Medical Institute.