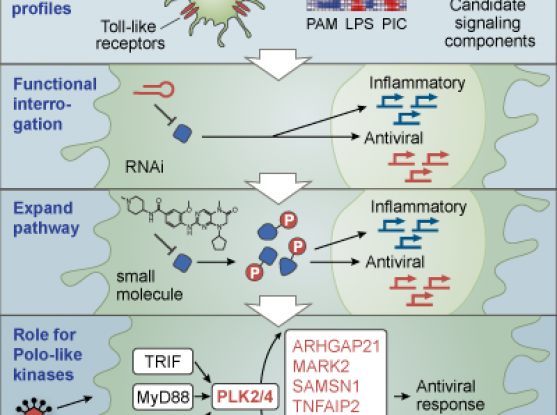 Scientists studying how mammals detect microbes have discovered new components in a crucial pathway that allows immune cells to detect viral invaders. Their research not only deepens the understanding of antiviral responses, but also uncovers connections to autoimmune diseases.

For years, scientists have known that sensors in mammalian cells detect pathogens, triggering a counterattack by the immune system. Researchers at the Broad Institute of MIT and Harvard and Massachusetts General Hospital decided to focus on one particular family of microbial sensors known as Toll-like receptors. A Toll-like receptor (TLR) is a protein, studded across the cellular membrane, that can recognize an invading microbe and activate dendritic immune cells. (TLRs got their name from their similarity to the protein coded by the Toll gene, first identified in the fruit fly.)

“A lot is known about TLRs, but a lot more is unknown,” said Nicolas Chevrier, a graduate student in Broad senior associate member Nir Hacohen’s laboratory and first author of a paper on viral-sensing pathways published in the Nov. 11th issue of Cell. “We wanted to identify missing components; there has been a lot of interest in targeting these receptors in order to design anti-inflammatory drugs, or to design new adjuvants for vaccines,” he said.

Working with Hacohen, who is also a Massachusetts General Hospital/Harvard Medical School faculty member, Broad Core Member and MIT faculty member Aviv Regev, and former post-doctoral fellow Ido Amit, Chevrier combined tools and technologies from across the institute – from gene expression arrays to RNA interference (RNAi) to phosphoproteomics. “We were able to start with an unbiased set of approaches, pulled together in an integrated fashion, in order to understand a more complete pathway that can ultimately be connected to disease, and to drugs,” Hacohen, senior author of the Cell paper, said. “An important long-term goal of all our work is to derive a model of cellular pathways that helps clarify disease and therapy.”

The study also made use of nanowires developed in the lab of Broad associate member Hongkun Park of the Departments of Chemistry, Chemical Biology, and Physics at Harvard University. The wires, made of the same silicon used in computer chips, are tiny spikes – invisible without the aid of a microscope. Immune cells resemble fragile bubbles, Hacohen said, making it hard to transfect them or introduce a chemical compound without destroying them. The nanowires poke an infinitesimal hole in the cell membrane – delivering a bit of chemical payload - but are so short that they don’t go all the way through and pop the bubble.

The researchers uncovered 35 antiviral signaling regulators - including 19 that were new - involved in TLR pathways. “We looked at our compendium of gene expression for all genes in our dendritic cells,” Chevrier said. They specifically looked for genes that were involved in signal transduction – the process by which a signal outside the cell interacts with a receptor on its membrane to cause a change in function. “We used transcriptional changes to find the first 'clue' for the new pathway and proteomics to expand it to many new members,” Regev explained.

They also found something unexpected: proteins called Polo-like kinases (Plks) that were known to play a role in regulating cell growth, but were being used in a completely different context within the TLR viral-sensing pathway. “Here, we found Polo-like kinases that were co-opted in microbial-sensing pathways, which was very surprising,” Chevrier said. In particular, they found that two Plks, known as Plk 2 and Plk 4, are essential in antiviral pathways, activating a signaling branch that involves a dozen proteins. Among them: Tnfaip2, which is associated with inflammation and with autoimmune diseases.

“There is no easy way to describe what Plk does because we don’t yet know,” Hacohen said. “It’s a new arm of the pathway. On the other hand, when we add a small molecule called BI2536 that inhibits the Plk proteins, it blocks the viral response.” Hacohen noted that there is considerable evidence that during the 1918 flu epidemic, patients died because their immune response was so strong it triggered massive inflammation. If society were faced with a raging new epidemic touched off by an unknown pathogen, similar drugs could potentially be used to tamp down the immune system just enough to reduce damaging inflammation. Because patients with diseases such as Lupus mount immune responses that are too strong and resemble viral responses, this tactic also holds promise for treating such diseases.

“The deeper and more complete your understanding of a network, the more it can be connected to what’s out there therapeutically and diagnostically,” Hacohen said.