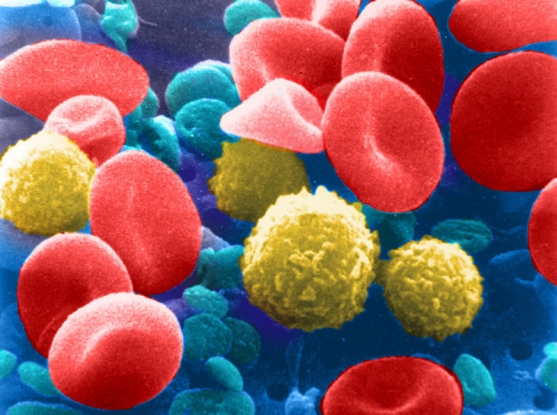 Study reveals surprising genomic swapping that underlies clonal hematopoiesis, a condition that can lead to blood cancer and heart disease.

Researchers at the Broad Institute of MIT and Harvard, Harvard Medical School, and Brigham and Women’s Hospital have uncovered a key genetic mechanism that helps drive clonal hematopoiesis (CH), a common, age-related condition in which some blood stem cells acquire a mutation and then give rise to cells, or clones, that outgrow normal blood cells. CH is known to increase the risk of blood cancer and cardiovascular disease later in life.

The research, which appears in Nature, shows that clones often swap certain genetic variants on one chromosome arm for those on its counterpart chromosome arm, effectively duplicating one parent’s genetic contribution and erasing the other’s. The team found 52 inherited genetic variants in seven genes that led to clones that had swapped inherited variants in consistent ways. This swapping helped the mutated blood stem cells outgrow the cells around them.

The findings highlight an important interplay between the genetic variation people inherit and the new mutations they acquire during their lifetimes.

“This ‘trading up’ of one parent’s gene variants for the other’s generates a substantial fraction of all blood clones,” said senior author Steven McCarroll, director of genetics for the Stanley Center for Psychiatric Research at the Broad, a Broad Institute Member, and a professor at Harvard Medical School.

The results reveal the genetic logic behind a form of mutation that frequently occurs in blood clones and in cancer more generally. “These kinds of mutations are quite common, but their biological effects had been mysterious,” said lead author Po-Ru Loh, a Broad associate member and professor at Harvard Medical School and Brigham and Women’s Hospital.

Lifting the hood on CH biology

Scientific awareness of clonal hematopoiesis emerged over the last decade through a series of studies, including earlier work by McCarroll, Loh, and the other co-author of the Nature paper, Giulio Genovese, a senior computational biologist at the Broad. While the contribution of CH to cancer and cardiovascular disease has become clearer during that time, the biological mechanisms that drive the formation and growth of clones have largely remained unclear.

In a 2018 paper, Loh, Genovese, McCarroll and their collaborators showed that a specific type of genetic mutation, known as copy number-neutral loss of heterozygosity (CN-LOH), was extremely common in CH. CN-LOH involves the swapping of genomic segments. But the scientists didn’t know how these mutations enable clones to outgrow the cells around them.

Now, using data from over 480,000 individuals through the UK Biobank — more than triple the number of samples in their 2018 study — the researchers have revealed important genetic patterns and biological processes that help explain the growth advantage of clones, including processes that drive cell growth and help cells respond to DNA damage.

The researchers found the 52 inherited genetic variants in seven genes: MPL, ATM, TM2D3, FH, NBN, MRE11, and SH2B3.  Research participants who had inherited any of these variants were likely to develop clones in which a genetic swap amplified or suppressed the effect of the inherited variant.

Two of the seven genes regulate stem cell self-renewal, the process by which stem cells divide and generate more stem cells. The scientists discovered that clones manipulate inherited variants in these genes, enabling the clones to self-renew more frequently and expand their numbers relative to normal stem cells.

Another three of the genes limit cell division after DNA damage and the shortening of telomeres, which are structures at the ends of chromosomes that erode with age. This suggests a second reason for the relatively fast growth of mutant clones — they don’t restrict their growth as they age and experience genetic damage as normal cells do, allowing them to eventually outnumber normal cells. This advantage helps to explain why CH becomes far more common in individuals over 50.

“The genetic effects are converging on pathways that help us understand the biology and the age dependence of clonal hematopoiesis,” said McCarroll.

The inherited variants in those seven genes allow cells to make genetic trades that have large effects on their proliferation. But the team suspected that hundreds of genes, on all chromosomes, might also be traded with smaller but meaningful effects.

To investigate this, the researchers used data on DNA variation and blood-cell counts from hundreds of thousands of healthy people to measure the effects of thousands of common, inherited variants on the number of blood cells. They then calculated “polygenic scores” that estimated the effects of genetic trades of each chromosome arm on cell proliferation.

The scientists found that the clones had consistently made genetic trades that increased their polygenic scores. In fact, the team could predict which genetic variants from each parent the clones would select.

The findings suggest that new mutations combine with inherited genetic variation to lead to the development of clones.

“Genetics has historically studied acquired mutations and inherited genetic variation separately,” said McCarroll. “These findings help us to think about all of it together, and to think about it in new ways. For example, acquired mutations are usually seen as random and capricious.  But across an individual’s body and over decades, almost all somatic mutations will occur at some point – and their interactions with inherited variants will determine their biological effects.”

The insights came from computational methods the team developed to analyze genetic variation along long chromosomal segments and to study segments or “haplotypes” in addition to individual variants. “These haplotypes are the true units of genetic inheritance, and often of mutation,” said Genovese, who helped develop the analytical approach.

As the availability of genetic samples for research has expanded and become increasingly diverse, the team’s approach is enabling more discoveries about CH.  For example, the researchers contributed to a related study led by Chikashi Terao and Yoichiro Kamitani at the RIKEN Center for Integrative Medical Sciences in Japan and also just published in Nature. That research examines for the first time the genomic landscape of CH in Japanese populations, finding that Japanese and European populations tend to acquire clones with different somatic mutations. The results help explain why B-cell lymphoma is common among people with European ancestry, while T-cell lymphoma is common among the Japanese.

“It will be important to embark on more studies like this that inform and learn from populations with diverse ancestries,” said Genovese.

Support for this research was provided in part by the National Institutes of Health (DP2 ES030554; R01 HG006855), a Burroughs Wellcome Fund Career Award at the Scientific Interfaces, the Next Generation Fund at the Broad Institute of MIT and Harvard, a Glenn Foundation for Medical Research and AFAR Grants for Junior Faculty award, a Sloan Research Fellowship, and a US Department of Defense Breast Cancer Research Breakthrough Award W81XWH-16-1-0316.