Dyann Wirth, one of many scientists who contributed to the development of the RTS,S vaccine, talks about what it means for public health and next-generation vaccines.

In October 2021, the World Health Organization recommended widespread use of the world’s first vaccine for malaria, a disease that kills 400,000 people each year globally. The WHO endorsed the use of the RTS,S vaccine among children in sub-Saharan Africa and other areas hit hard by the disease. The vaccine is also the first ever to be approved for a human parasitic disease, and is the result of more than 30 years of work by scientists in both academia and industry. 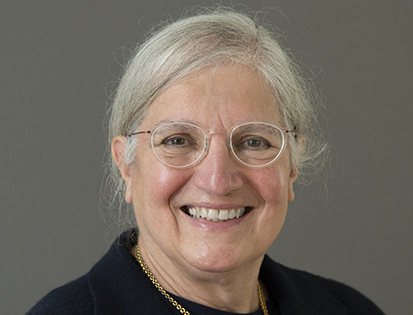 Dyann Wirth, an institute member at the Broad Institute of MIT and Harvard, chairs the WHO’s Malaria Policy Advisory Group and also led a global expert committee that made this recommendation. We spoke with Wirth, who is also the Richard Pearson Strong Professor of Infectious Diseases at the Harvard T.H. Chan School of Public Health, about the significance of this historic decision, why it took so long to develop the vaccine, and how research at the Broad on RTS,S can help inform the next generation of malaria vaccines.

Why is the WHO’s recommendation so significant?

The RTS,S vaccine is an accomplishment both for science and for public health.

Malaria still remains a major public health problem. In 2020, there were more than 200 million cases of malaria and nearly a half million deaths in children under five in Africa. Over the first 15 years of this century, we made great progress in reducing disease burden by about 50 percent through other malaria control measures. However, for the last five or six years, the numbers of cases and deaths have been very similar year over year, so we’ve stalled in advancing our goal of eliminating the disease.

Existing malaria control measures such as insecticide-treated nets and integrated case management using diagnostics and treatment will still save lives. But the vaccine gives us a new tool with a completely different mechanism. The RTS,S vaccine is designed to train the human immune system to recognize and knock out the parasite before it can cause the infection. This is different from something that attacks the mosquito, the insect that carries and transmits the disease, or something that treats people who already have the disease.

How will the vaccine change lives in areas hardest hit by malaria?

The vaccine is not a silver bullet — it’s not 100 percent efficacious and it's relatively short lived. Many in the malaria community had mixed feelings about the level of protection from RTS,S. But in fact, the pilot implementation studies run by WHO showed that it prevents hospitalizations and reduces clinical disease. That means it clears hospital beds for others, and it means parents won’t have to take their children to the hospital as often. Those things have a real impact on people’s health.

So, it’s important to recognize that “perfect” may be the enemy of something that could be of enormous value from a public health perspective. Just as we continue to wear masks after getting vaccinated for COVID, we will continue to need to use bed nets and other malaria control measures, but the RTS,S vaccine is a new tool that can have added value. And for the target population, those very young children who are at risk of severe disease or death, it can give them added protection. That’s what’s exciting — to have a new way of attacking this disease.

Why has it taken decades to develop a malaria vaccine?

This vaccine has been a long time in the making. In the late 1970s, a team led by Dr. Ruth Nussenzweig discovered that the circumsporozoite (CS) protein (secreted by the malaria parasite) could be used as a vaccine target. Turning this discovery into the development of a vaccine started around 30 years ago and was led originally by the U.S. Department of Defense and then taken on by GlaxoSmithKline as the industrial partner, which devoted significant talent and resources to developing this vaccine. 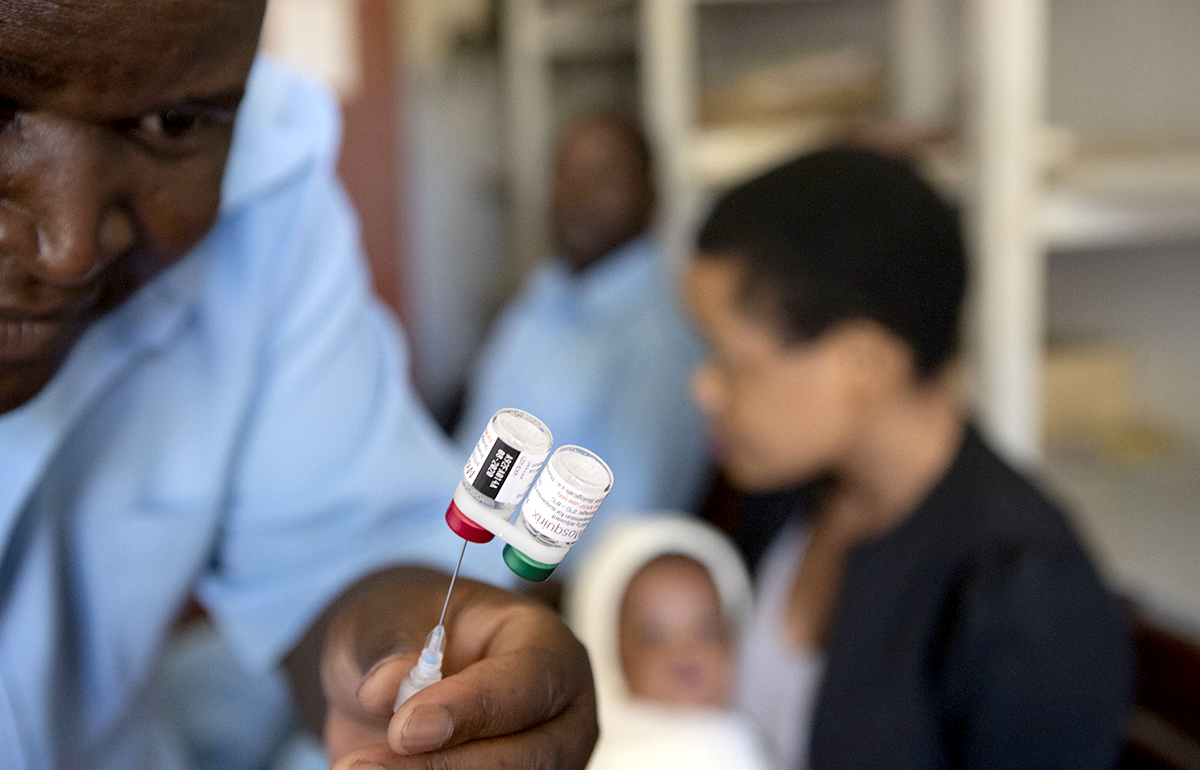 A doctor in Malawi prepares the vaccine for administration during the launch of the WHO's pilot program.
Credit: WHO/Mark Nieuwenhof, 2019

Because it was the first ever vaccine for a human parasite and because the target population was very young children, the most vulnerable in our population, there was a lot of attention on safety and potential unintended consequences of the vaccine. So it underwent multiple phase II trials and then a very large-scale phase III trial, which took 10 years or so. Several more years were spent on an implementation pilot in Ghana, Kenya, and Malawi, in which 800,000 children were vaccinated.

It’s important to remember that the fundamental discovery that led to this vaccine is just now becoming something that can help patients. It was a long timeline, but translation of basic discoveries often takes time.

How did Broad scientists contribute to what’s known about RTS,S, and how might that influence the development of new malaria vaccines in the future?

In clinical trials of RTS,S, the vaccine was about 50 percent efficacious. With partners at the Harvard T.H. Chan School of Public Health and Fred Hutchinson Cancer Research Center, Dan Neafsey and I at the Broad wanted to explore why. Through our genomics work, we observed a high degree of genetic sequence variation in a region of the CS protein that was included in the vaccine. We hypothesized that the variation was due to escape of the parasite from the immune system — selective pressure of the human immune system was causing the parasite to change, similar to what we see with the coronavirus or influenza virus.

In collaboration with the phase III clinical trial group, we tested that hypothesis by sequencing all of the breakthrough cases of malaria during the RTS,S vaccine trial. The Broad’s Genomics Platform developed technology to process thousands of samples from patients by removing DNA from blood spots on filter paper for analysis. They also championed a focus on quality control, and they’ve been great partners in all this.

That work was part of a study, published in 2015, through which we discovered that the vaccine is indeed more protective against parasites with certain CS protein variants than others, contributing to the modest efficacy seen in clinical trials. The study demonstrated the importance of considering allelic variation when designing vaccines, not just for malaria, but for other infectious agents. And we’re now taking part in a new clinical trial with a much bigger scope, to follow vaccinated patients longitudinally using similar methods and learn what factors influence longer term efficacy.

The knowledge from this work gives us a way forward to imagine a version two or version three of the malaria vaccine with broader coverage. Just as we need a new influenza vaccine each year to match the virus that’s currently circulating in the population, we anticipate that a similar approach might be appropriate for malaria. There’s an opportunity to use the knowledge we generated to build a next-generation malaria vaccine, because while the RTS,S vaccine is protective, it’s not perfect. No malaria tool is perfect.

Can the next malaria vaccine be developed more quickly than the first one?

I think it's going to be much faster because for one thing, vaccines are going to enjoy a renaissance — and I believe they should. The RTS,S vaccine shows us it’s possible to develop vaccines for complex pathogens, and not just for malaria, but other eukaryotic pathogens, too.

The vaccine shows us it's possible to develop vaccines for complex
pathogens, not just for malaria, but other eukaryotic pathogens, too.
Dyann Wirth

And of course, the development of the COVID vaccines has kickstarted the vaccine world. Before the pandemic, it was a 10-year-long path to get a vaccine approved. Within weeks of the coronavirus sequence being published, there were more than 100 COVID vaccine candidates in development. Meanwhile, there have only been a handful of malaria vaccine candidates over the past several decades, and most haven’t even made it to preclinical evaluation. A complex organism or parasite like Plasmodium falciparum (which causes malaria) has thousands of genes, which gives it an enormous amount of biological complexity compared to a virus that might only have a dozen genes. So, it’s not easy to develop a vaccine for a parasitic disease.

Still, COVID demonstrated that a vaccine, whether mRNA or a more standard design, could get emergency use authorization within a year, if every streamlining opportunity was taken. Pfizer achieved full FDA approval within 18 months. So it’s changed everyone’s timelines. That speed won’t happen for other malaria vaccines because there’s more complexity, but I think the timeline could be much faster.

Top image: The RTS,S malaria vaccine at the Muotcha HIV Testing & Counseling Centre in the town of Balaka, Malawi, during the WHO's vaccine implementation pilot program. Credit: WHO/Monta Reinfelde, 2019.