The Eric and Wendy Schmidt Center and the Klarman Cell Observatory host a workshop on the interface of tissue biology and machine learning.

In recent years, technologies like single-cell RNA sequencing have provided scientists with numerous insights into how individual cells work. Now, researchers are in the early stages of using machine learning and new experimental technologies to gain similar insights into how groups of cells, or tissues, function. 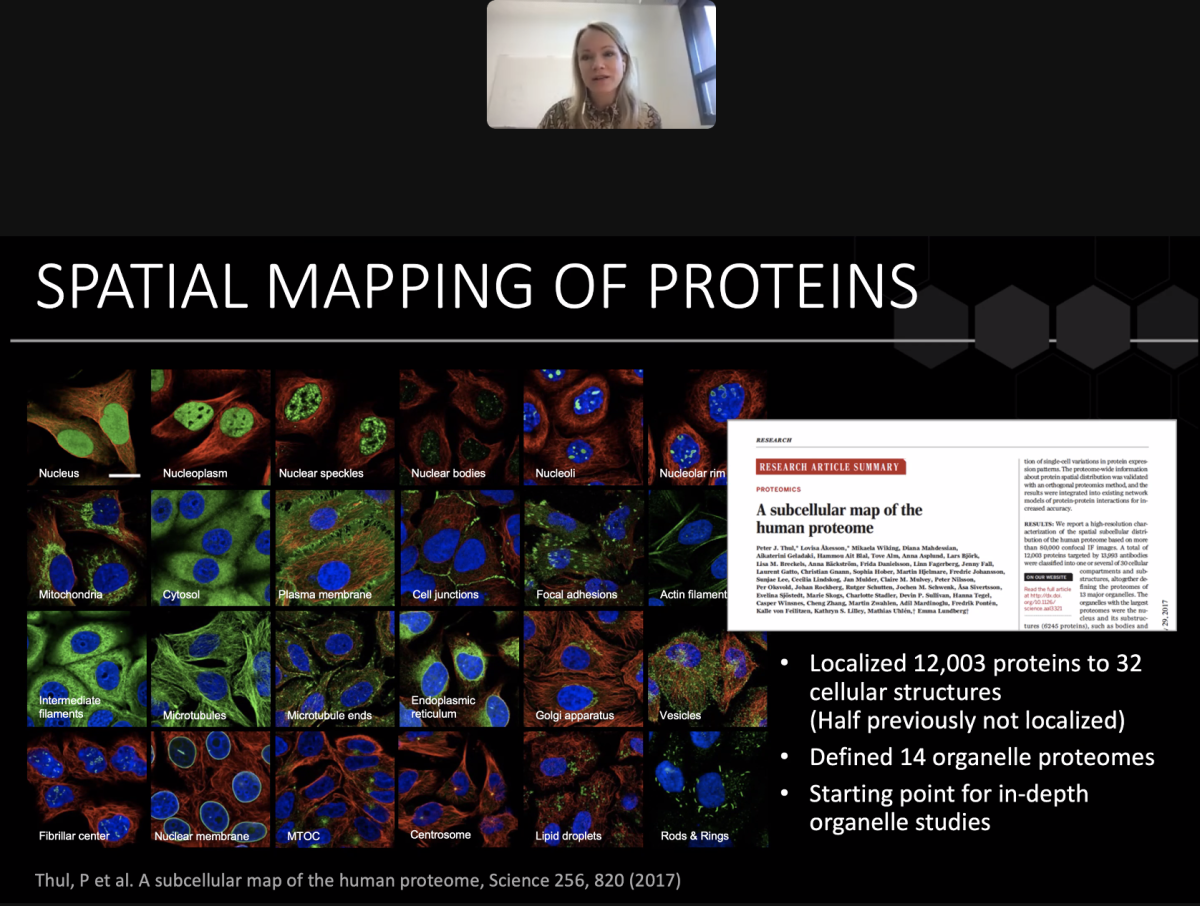 Emma Lundberg, an associate professor of bioengineering at Stanford, outlines her protein-mapping research.

Advancing our understanding of tissue biology requires tight collaborations between biologists with driving questions, technologists creating new experimental methods, and computational scientists who are creating new ways of analyzing the data. One of the key aims of the April 27 workshop held by the Eric and Wendy Schmidt Center (EWSC) and the Klarman Cell Observatory at the Broad Institute was to explore the interface between these disciplines. Speakers and panelists included researchers at Stanford University, MIT, Harvard University, the Sloan Kettering Institute, UC Berkeley, Princeton University, and the Broad Institute.

The workshop brought together a diverse set of communities to discuss new tissue biology research questions — and new opportunities for collaboration between the biomedical sciences and machine learning.

Caroline Uhler, Co-Director of the EWSC, a core member of the Broad Institute, and an associate professor in the Department of Electrical Engineering and Computer Science and the Institute for Data, Systems and Society at MIT, told workshop attendees during opening remarks that biology has seen an “explosion” of data in recent years. “We now have the opportunity to understand the programs of life, so not just the units (like genes or single cells), but actually the interactions.”

These cellular interactions play a key role in the cancer immunotherapy research shared by keynote speaker Garry Nolan, a professor in the pathology department at Stanford University. His research team develops algorithms to model tissue areas where different groups of cells interact, areas he calls “interface zones,” to gain insights into how cancer remodels its tissue environment and evades the body’s immune system. These interface zones are critical as cell changes commonly occur there, leading to tumor growth.

“So I would urge you, when you're looking at your RNA data sets, to the extent that you can call out these kinds of interface zones, pay special attention to the RNA changes that are occurring there,” said Nolan, adding later: “The boundary space is where the action is.”

Additionally, biologists should reconsider labeling tumors and other features “heterogenous,” which implies that tumors from different patients are too distinct from one another to be compared. “There is an order here that can be extracted,” said Nolan

Meanwhile keynote speaker Emma Lundberg, an associate professor of bioengineering at Stanford and co-director of the Human Protein Atlas, outlined how her team has mapped where proteins are located in cells. Interestingly, over half of proteins can be found in more than one part of the cell, which changes how they function.

“If you ask me, I would say that we'll never be able to fully understand and model cell function if we don't include spatial proteomics data,” said Lundberg.

Panelists also discussed next steps for engineered tissues and artificial organs for disease study and regenerative medicine. Sangeeta Bhatia, a professor of health sciences and of electrical engineering and computer science at MIT’s Koch Institute, said that we’ve been able to engineer artificial tissues and organs that have little structure, like the skin and cartilage, for decades and now are moving onto endocrine tissue, like the pancreas and liver. “Then you start to think about the tissues whose function is dependent on architecture, like the kidney, the lung — that's the next frontier, and I think we are not quite there yet.”

One challenge brought up by Paola Arlotta, a professor of stem cell and regenerative biology at Harvard University, is how to factor genetics into tissue and organ models. One way to do this is to see how cells from different individuals respond to the same kinds of disturbances. If researchers don’t take genetic variability into account, “we’re ignoring a fundamental component of what human disease is,” she said.

Keynote speaker Dana Pe’er, Chair of the Computational and Systems Biology Program at the Sloan Kettering Institute, outlined computational limitations that need to be addressed to answer pressing biological questions. For example, as researchers move from profiling a small section of a tissue to mapping a whole tissue or organ in different samples, they need to be able to map different tissue sections to each other.

“We’re still largely trying to figure out how to process this data, which is hampering our ability to interpret and powerfully utilize the data,” Pe’er said.

At the end of the second panel, Anthony Philippakis, co-director of the Eric and Wendy Schmidt Center and chief data officer of the Broad Institute, asked panelists whether they had any “recipes for success” to foster collaborations between the two fields.

Bhatia emphasized the importance of having researchers, or research teams, who are “bilingual” — that is, able to understand both experimental and computational biology. "It doesn't work well if you're just the recipient of data and you don't understand the context." Bhatia said. "We have to create these teams where we can really speak both languages."

Starting the conversations needed to build this bilingual proficiency was precisely the goal of the workshop.