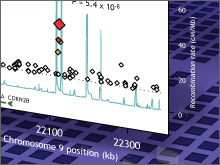 The interpretation of genome-wide association results can be greatly facilitated by visualization.

As part of the type 2 diabetes whole-genome scan, we developed scripts (written in R) to generate quantile-quantile (Q-Q) plots as well plots of the association results within their genomic context (gene annotations and local linkage disequilibrium patterns). These scripts are provided here "as is"; users should have a working knowledge of the R package.

The output of these scripts are PDF files that can be edited manually using programs like Canvas and Photoshop etc.

Genome-wide analysis involves hundreds of thousands of statistical tests, and even modest levels of bias can distort the null distribution and overwhelm a small number of true associations. To search for evidence of systematic bias (from unrecognized population structure, analytical approach, genotyping artifacts, etc.), a quantile-quantile (Q-Q) plot can be used to characterize the extent to which the observed distribution of the test statistic follows the expected (null) distribution. 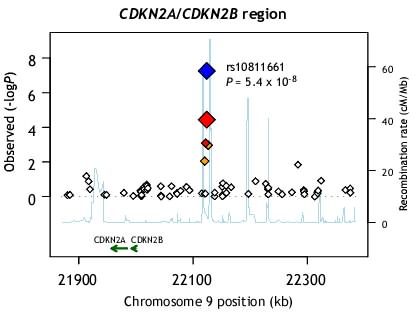 You have to provide a file that contains the following data for every SNP across the region of interest: position (as Build 35 coordinates), P-value, a label to indicate whether a SNP is quot;typed" or "imputed", and the r-squared between that SNP and the putative associated variant. All SNPs in this file will be plotted with their corresponding P-values
(as -log10 values) as a function of chromosomal position. SNPs that are "typed" are plotted as diamonds; "imputed" SNPs are plotted as circles. Estimated recombination rates are plotted to reflect the local LD structure around the associated SNP and their correlated proxies (bright red indicating highly correlated, faint red indicating weakly correlated).

The R script needs to be modified as follows:

If you're a local Broad user...

I have set up an example directory in my home directory ag:~debakker/figures/ which contains the two R scripts and the two example files. Run the R scripts as follows:

(These R scripts will automatically point to a local copy of the gene annotations and the recombination rates, so there's no need to download these yourself if you run these scripts locally on the Broad server.)

I have also put here a potentially useful script to grep out the HapMap r-squared values (pre-computed with Haploview). Run as follows:

where SNP refers to the central associated SNP (give the rsID), CHR refers to the chromosome it's on, and FILE is the name of the file containing the association data (like DGI_chr9_hit.txt). Make sure the FILE contains a proper header line so that R will recognize the columns (for example, look at the DGI_chr9_hit.txt file). The output will be a file with the same filename appended with ".new", with the rsquared values added for every SNP in a separate column ("RSQR").