For journalists: Statements and background on the CRISPR patent process


The ability to precisely edit the genome of a living cell holds enormous potential to accelerate life science research, improve biotechnology, and diagnose and treat human disease. CRISPR research is a large, highly collaborative field that involves contributions from many talented scientists around the world.

A complex patent and licensing landscape threatens innovation. The best thing, for the entire field, is for the parties to reach a resolution and for the field to focus on using CRISPR technology to solve today’s real-world problems.

Broad Institute has pressed for a joint licensing strategy, or patent pools, for more than eight years -- before patents were issued to Broad or the University of California-Berkeley (UCB), with the hope of ensuring open, equitable, and streamlined access to these transformative tools. These efforts continue, and we remain optimistic.

On February 28, 2022, the Patent, Trial and Appeal Board (PTAB) issued a judgment and decision in the second interference involving claims to CRISPR-Cas9 systems for use in eukaryotic cells. This proceeding involved certain patent applications of CVC (University of California-Berkeley, the University of Vienna, and Emmanuelle Charpentier) and the same Broad-issued patents as in the first interference.

This decision once again confirmed Broad’s patents were properly issued. As the PTAB and U.S. federal courts have repeatedly established, the claims of Broad’s patents to methods for use in eukaryotic cells, such as for genome editing, are patentably distinct and not reasonably expected from results of biochemical “test tube” experiments.

Broad believes that all institutions should work together to ensure wide, open access to this transformative technology and will continue to explore how best to make this happen.

In April, 2014, the USPTO granted US Patent No. 8,697,359 to Broad, MIT, and Dr. Feng Zhang. This patent (which draws priority from a provisional patent application filed on December 12, 2012) contained successful experiments.

It was based on original work that began at the Broad and MIT in early 2011, was further reflected in a January, 2012 federal grant application to the National Institutes of Health and culminated in the manuscript submitted on October 5, 2012 that was published in Science on January 3, 2013 as Cong et al.

This marked the world's first engineering of CRISPR-Cas9 to be delivered and used to achieve mammalian genome editing. Zhang was the first to file a patent application that described and enabled such a method.

These CRISPR components and methods have since become the leading standard for genome editing worldwide. Since 2013, the Zhang Lab has openly shared CRISPR reagents and tools with more than 3,000 institutions in 75 countries through the nonprofit Addgene. For research by companies, Broad Institute licenses CRISPR IP non-exclusively and through the open “inclusive innovation” model to maximize opportunities for therapeutic development across human disease.

Broad’s issued patents are for genome editing and uses in eukaryotic cells — including cells from animals, humans, and plants. (Broad manages a patent portfolio on behalf of several collaborating institutions, including Broad, MIT, and Harvard.)

As federal courts have made clear, the UCB patents do not affect the Broad CRISPR patent estate in any way, because Broad’s claims are patentably distinct.

Because the patent estates cover different methods, a commercial entity seeking to use CRISPR might require a license from both Broad/MIT/Harvard and through the commercial entities that control use of UCB licenses.

Broad continues to call on UCB to join discussions for a patent pool or another coordinated licensing approach, such as the joint licensing framework Broad developed for CRISPR in agriculture.

In 2015, UCB asked the U.S. Patent and Trademark Office (USPTO) to declare an “interference” between the claims of its ‘859 application and the Broad 8,697,359 patent, which had recently been issued. Under the "first to invent" patent system in place at the time, when two different sets of inventors claimed overlapping inventions, a key question was: Which set of inventors was the “first to invent” by “reducing the concept to practice”?

UCB argued that Broad’s inventions, for editing genes in eukaryotic cells, were obvious extensions of their work on cutting purified DNA in test-tube environments — and therefore should not be patented.

The Patent, Trial and Appeal Board (PTAB) ruled in 2017 that the claims in Broad’s patents and in UCB’s applications concerned different inventions, and that Broad’s inventions in eukaryotic cells were not drawn from nor obvious over UCB’s work, particularly the experiments in test tubes as in Jinek 2012, and without work in eukaryotic cells. UCB appealed to the United States Court of Appeals for the Federal Circuit, which ruled in Broad’s favor in 2018.

The PTAB described the important differences between Broad’s work and UCB’s:

In June 2019, the PTAB initiated a second interference involving claims to CRISPR-Cas9 systems for use in eukaryotic cells. This proceeding involves certain patent applications of CVC (University of California-Berkeley, the University of Vienna, and Emmanuelle Charpentier) and the same Broad-issued patents as in the first interference.

The first interference confirmed Broad’s patents were properly issued based on the September 10, 2018 decision by the U.S. Court of Appeals for the Federal Circuit, which held that the claims of Broad’s patents to methods for use in eukaryotic cells, such as for genome editing, are patentably distinct and not reasonably expected from results of biochemical “test tube” experiments.

In its filings related to the second interference, the CVC has attempted to avoid any evaluation of who actually invented a method first, because all of the evidence clearly demonstrates that CVC was not the first to invent any method of using CRISPR in eukaryotic cells.

Instead, CVC aims to persuade the PTAB to reverse prior decisions and, on the same evidence, to reach an opposite conclusion, namely, that successful experiments (reduction to practice) in eukaryotic cells were never necessary.

Priority dates are the dates PTAB has decided each party demonstrated “constructive reduction to practice” of the Count of this interference through patent applications.

The PTAB accepted the Broad’s request that its priority date be December 12, 2012.

The PTAB rejected CVC’s request that its priority date be May 25, 2012, writing “the CVC inventors’ comments tend to indicate that they did not have possession of a functional CRISPR-Cas9 system in eukaryotic cells” at that time. Instead, PTAB has accepted January 28, 2013 as the priority date for CVC.

PTAB has set Broad as the “Senior Party” and CVC as the “Junior Party” for the next phase of the interference process.

The PTAB issued a Decision on Motions and moved this second interference, with a count directed to CRISPR-Cas9 systems having a single molecule guide RNA for use to cleave or edit DNA in eukaryotic cells, into a “priority phase” to consider the actual laboratory records of each party for their CRISPR work and to establish the dates of invention.

In oral arguments on February 4, 2022, Broad described evidence to support conception and actual reductions to practice of CRISPR-Cas9 systems of the Count at Broad. CVC has not even asserted an actual reduction to practice of any CRISPR-Cas9 system in eukaryotic cells prior to Broad’s complete invention, offering challenges based on the same arguments that have already failed to persuade the PTAB and Court of Appeals for the Federal Circuit.

The facts have not changed in the years since these rulings were issued.

In a ruling on February 28, 2022, PTAB confirmed Broad’s patents were properly issued.

During the “priority phase” of this interference, the PTAB considered laboratory records and other information provided by each party to establish the dates of invention.

Broad provided a record of Dr. Zhang’s CRISPR-Cas9 inventions, records, and communications relevant to this proceeding, including:

(For more on how many scientific teams worldwide have contributed to our understanding and enablement of CRISPR, please see the CRISPR timeline.)

As part of the priority phase, CVC asked the PTAB to authorize CVC to subpoena several people including Dr. Marraffini. The PTAB rejected these broad requests and only authorized a very narrow subpoena to Dr. Marraffini as to his recall of communications regarding sgRNA in 2012, rejecting CVC broader requests.

Questions and answers about CRISPR patents

Q: Why did Broad receive a CRISPR patent before UCB, even though UCB applied first?

The Broad patent estate and the UCB patent estate concern different inventions, so the order of issuance (or application dates) does not matter.

In December, 2012, Broad requested “accelerated examination” of its application and paid the standard $70 fee. This meant the USPTO considered the application more quickly and the Broad agreed to respond more quickly to questions raised by the USPTO. The Broad 8,697,359 patent was issued in April, 2014.

(Accelerated examination does not change the level of scrutiny applied to the application — the same process of comparing the application to all other potentially-related patents takes place.)

UCB did not request accelerated examination when it applied for a patent in May, 2012. This, and UCB’s decision in 2015 to request that the USPTO declare an interference — especially the unnecessary three-year process that followed that UCB request — delayed their patent application from being considered until late 2018.

Q: Do patents limit the ability to share CRISPR widely?

This depends on the choices made by the institution or company that is licensing an invention. Broad believes CRISPR technology should be available to the global scientific community to advance our understanding of the biology and treatment of human disease, and to help lay the groundwork for a new generation of therapies.

Broad has worked for more than eight years to ensure that CRISPR tools are made widely available to maximize public benefit.

Q: What is the patent landscape around the world?

(The below information is current as of late 2020.)

In the United States, Broad has been allowed or granted 31 CRISPR patents, including 26 patents for CRISPR-Cas9, as well as 3 for CRISPR-Cas12/Cpf1. The USPTO has also granted patents directed to CRISPR-Cas9 to UC Berkeley (UCB), University of Vienna and Emmanuelle Charpentier.

In Europe, Broad has been allowed or granted 33 CRISPR patents, including 29 patents related to CRISPR-Cas9 and 4 related to CRISPR-Cas12/Cpf1. UCB has also been issued CRISPR patents in Europe. Most, if not all, of the patents of both parties have been opposed by multiple parties. For one of the Broad patents, EP 2771468B, a panel of the European Patent Office (EPO) denied the Broad’s reliance on its U.S. priority provisional application in Europe based on a technical formality. The decision did not involve the actual scientific merits of the CRISPR patent application, but concerns the current interpretation of rules that dictate what happens when the names of inventors differ across international applications. This interpretation affects many other European patents that rely on U.S. provisional patent applications, and is inconsistent with treaties designed to harmonize the international patent process, including that of the United States and Europe. The majority of Broad’s CRISPR-Cas9 patents in Europe were not affected by this decision. These include the fundamental claims in EP 2825654B1, as well as others covering certain key therapeutic indications — including for previously untreatable diseases. In addition, Broad has numerous other CRISPR-Cas9 patent applications pending in Europe that are not affected by this formalities issue, as well as granted and pending patents related to CRISPR-Cas12/Cpf1, which are not affected.

In China, the State Intellectual Property Office has allowed three Broad patent applications, and we expect further to be granted based on pending applications. UCB also has patents in China. In China, patents are subject to invalidation proceedings after they are issued. 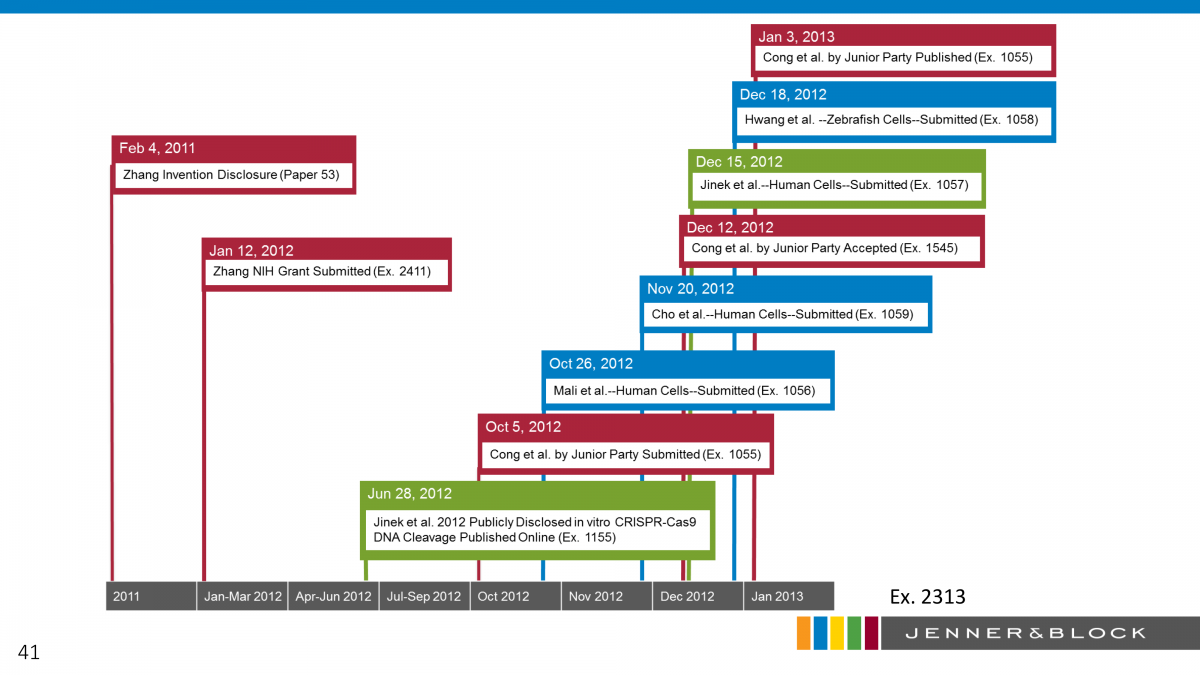