Zooming in on early embryonic development 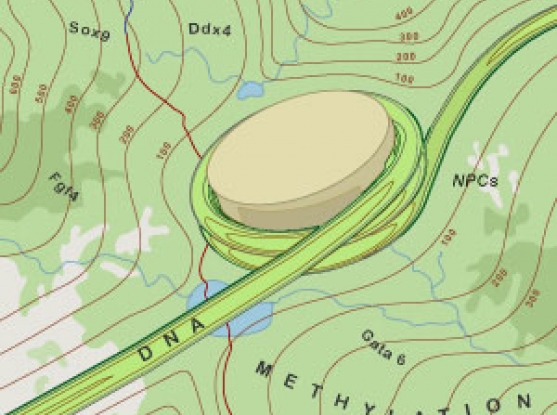 By Elizabeth Cooney
If there were just one book of biology, it would be rewritten constantly with the sometimes dramatic, more often incremental advances in understanding that come with the nature of science. Constant revision can come with insight – think Darwin – or with technology – witness faster, cheaper...

If there were just one book of biology, it would be rewritten constantly with the sometimes dramatic, more often incremental advances in understanding that come with the nature of science. Constant revision can come with insight – think Darwin – or with technology – witness faster, cheaper sequencing machines – or with both.

New fields give rise to newer ones, such as the slew of -omics that sprang from genomics. Genetics, the study of the basic physical unit of inheritance, has led to epigenetics, the study of chemical compounds that modify the genome, telling it what to do, where to do it, and when to do it.

When Alexander Meissner teaches his epigenetics students about the earliest stages of mammalian development, he uses a textbook model of DNA methylation. Until now. This chapter of basic biology will have to be rewritten, based on research he and Broad colleagues report in Nature showing that methyl groups behave in a more complex pattern than previously understood.

A high-resolution view of mouse embryogenesis before the blastocyst stage – down to the single bases As, Cs, Ts, or Gs in the genetic code – revealed interesting dynamics and differences in DNA methylation between the paternal and maternal genomes that might have implications for how these genes are regulated during early embryonic development. These differentially methylated genes went beyond known imprinted genes, whose expression is determined by the parent from which they came.

“This paper gives you for the first time a base-resolution view of the complete pre-implantation stages, so you can see which parts of the genome, which genes and which regulatory elements change and to what degree,” says Alex, a senior associate member of the Broad, an assistant professor at Harvard University, and senior author of the paper. “Today's technologies are incredibly sensitive, so you can finally zoom in and view this dynamic phase at high resolution. At the Broad and around the world many groups are busy mapping DNA methylation in every possible cell type to gain insights to when and where methylation is used as a regulatory mark, how it changes in normal development and what are changes that occur in different diseases.”

In cancer, for example, it is known that gain and loss of DNA methylation at particular sites in the genome are involved in the disease. Identifying all of these sites might provide clues for disease prediction as well as insights into disease biology. But before making sense of aberrant changes in diseases, it is critical to understand DNA methylation better across all stages of development.

One map has already been redrawn: a genome-scale DNA methylation map in mouse embryogenesis.

Other authors of “A unique regulatory phase of DNA methylation in the early mammalian embryo” are Zachary D. Smith, Michelle M. Chan, Tarjei S. Mikkelsen, Hongcang Gu, Andreas Gnirke, and Aviv Regev. Others who helped make this work possible include researchers in the Meissner and Regev laboratories; members of the Broad's Genome Sequencing Platform; and researchers from the MIT BioMicro Center.

2000 common variations and counting
Broad artist in residence at MassArt