#WhyIScience Q&A: What mouse studies can reveal about psychiatric disorders 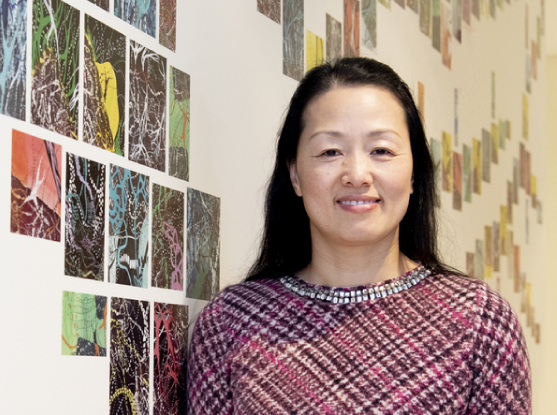 Credit : Allison Dougherty
Zhanyan Fu
By Abbey Bigler
Zhanyan Fu talks about the importance of animal models in her work investigating the roots of autism and other psychiatric disorders.

Zhanyan Fu was about to launch her career as a physician when she decided to focus instead on learning about the molecular mechanisms of disease. As a medical student at Zhejiang University School of Medicine in China, Fu wanted to understand disease mechanisms at a molecular and cellular level with the hope of developing novel treatments for incurable diseases, especially those in the brain. So instead of becoming a doctor, she pursued a Ph.D. in neuropharmacology at Beijing Union Medical College, one of the most selective medical colleges in China. She then moved to Georgetown University as an exchange grad student and later for a postdoctoral position where she trained as an electrophysiologist, examining the electrical activity of neurons.

Fu is currently an associate director and research scientist at the Broad Institute of MIT and Harvard’s Stanley Center for Psychiatric Research, where she studies synapses and brain circuits in mouse models of psychiatric disorders including autism, attention deficit hyperactivity disorder (ADHD), and schizophrenia. She hopes that by identifying the mechanisms that underlie these disorders, rational new treatments can ultimately be developed that precisely target those mechanisms, reduce symptoms, and improve patients’ quality of life.

Fu recently spoke with us in a #WhyIScience Q&A about the roles of different disease models in psychiatric research and the triumphs and trials of her work:

Q: What type of research and mouse models have you focused on at the Broad?

A: We have an autism mouse model where we have been working closely with Guoping Feng’s lab at the Stanley Center and MIT to study a gene called SHANK3. This gene is strongly associated with not only autism spectrum disorders (ASD), but also a disorder called  Phelan-McDermid syndrome. Mutations in this gene account for about 1-2 percent of all ASD cases. A lot of psychiatric disorders are actually polygenic, meaning that a single gene might have a very subtle effect. However, there are still individual genes that have strong effects and play a very important role in disease, like SHANK3.

We have multiple genetic models ranging from a model with a full knock-out of SHANK3 to models carrying different mutations from patients. We have also generated a conditional knock-in mouse model where a mouse would act like a full knock-out animal, but at a certain point, you could inject a chemical compound that turns the gene on again.

Q: How are these mice models of autism?

Autism is characterized by features including repetitive behaviors, and when we knock out the SHANK3 gene, the mouse shows very severe grooming repetitive behaviors. The other test for this model is social interaction. We know autism patients have a social interaction deficit, and rodents typically have a socializing nature. However, these model mice are almost scared of other mice; they prefer to run away or to stay alone. These phenotypes give us quite a strong foundation to look at synapse and circuit mechanisms in autistic-like behavior. We also apply very similar ideas but focus on different genes to look at disorders such as ADHD to understand what are the brain circuits responsible for the hyperactivity and attention or cognitive inflexibility seen in these disorders.

A: I would say first that the human brain is inaccessible for research. The biggest advantage of a rodent model is accessibility; we have well established ways to genetically edit mice. Also, some brain circuits are very evolutionarily conserved, meaning they are very similar in mice and people. Applying a rodent model can be very beneficial to address those brain circuits that we know are evolutionarily conserved.

But the rodent model has its limits in cognitive function. For psychiatric disorders where researchers are interested in understanding the circuits responsible for social learning and other cognitive functions, they might put more effort into exploring the brain circuits using primate models. And maybe in the meantime, we would think about applying human stem cell models, including both cell cultures and 3D brain organoids, which faithfully maintain human genetic background.

Q: What are some of the biggest challenges you and other members of the Stanley Center face in studying psychiatric disorders?

A: I think the biggest challenge we are facing is that we still know so little about how brains in general work, let alone the pathophysiological changes that account for the symptoms of psychiatric disorders. With the rapid advancement of genetics that’s revealing the heterogeneous and polygenic nature of psychiatric disorders, overall the biggest challenges for neurobiologists are how to translate genetic findings into disease mechanisms and then into biomarkers and therapeutic targets.

With my research projects in particular, I think that a big challenge is choosing which brain circuit to study and which animal model to use. Sometimes I’m a little bit frustrated that at this stage, we’re still trying to test out which models and experimental technologies can really help us to address the questions we are most interested in at the synapse and circuit level.

Q: What do you feel has been your biggest scientific accomplishment so far?

A: I think the accomplishment that I'm most proud of is the solid research findings with the SHANK3 disease model. The great thing is the reproducibility. Particularly in the psychiatric disorder field, people complain about a lot of inconsistencies in findings from different labs. So far with the SHANK3 model, we have had very positive feedback and people have used our models and basically reproduced all the main findings from our group. A solid project with solid data is key; only in this way can you really pass along findings to other scientists who can then think creatively based on your foundational results. That’s what I feel is my biggest accomplishment: just taking the necessary steps and being rock solid.

#WhyIScienceQ&A: Why I switched from experimental to computational biology
What was the biggest science / tech breakthrough of the last decade?