#WhyIScience Q&A: An undergraduate’s journey motivates her to become a physician-scientist 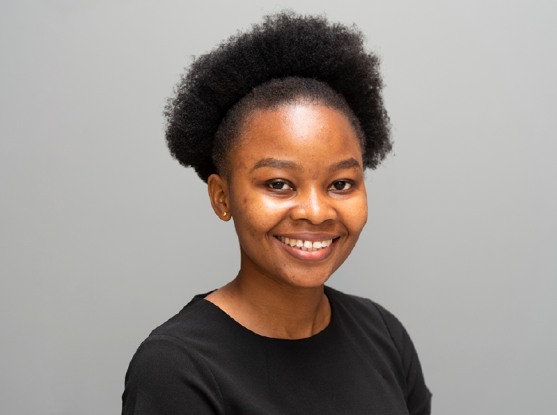 By Eilidh Gilbert
Student researcher Esther Elonga talks about why she wants to become a physician-scientist and support the refugee community.

The distance from the Democratic Republic of Congo (DRC) to Stanford, California can be measured in miles or kilometers, but Harvard undergraduate student Esther Elonga measures that journey in adventures. “I like the fact that life is like a Choose Your Own Adventure,” said Elonga, who is also a researcher at the Broad Institute of MIT and Harvard. “Just go. Do what you're so passionate about. That is something I always look forward to.”

As a senior at Harvard, Elonga has already had her fair share of adventure. Her family fled the war-torn DRC when she was three years old and lived as refugees in Uganda for 13 years before moving to the United States and settling in Concord, New Hampshire. Two years later, Elonga earned a full scholarship to Harvard, where she majored in chemistry while conducting translational research at Broad. She is now about to embark on the next stage of her adventure, beginning an M.D.-Ph.D. program at Stanford University this fall.

At Broad, Elonga has spent the past three years in the lab of institute member Anna Greka and in the Center for the Development of Therapeutics. She studied a chemical compound that is showing promise as a possible treatment for various diseases. Along the way, Elonga’s choices have been driven by her love of learning and desire to give back to her community. She has tutored and mentored younger students, advocates for refugee communities in the United States, and is studying how COVID-19 is affecting the education of both U.S. national students and refugee students at Concord High School, her alma mater.

Elonga recently spoke with us about her educational path, what is inspiring her to become a physician-scientist, and the people who supported her throughout her journey in a #WhyIScience Q&A.

I have wanted to be a doctor from the time I was a child in Uganda. My dad got sick when I was 12 years old. My mother stepped in as his caregiver, and I saw how her care maintained his health during the time we were there. Observing this made me want to be a doctor. After moving to the U.S., in my senior year of high school, I took part in an essay contest and wrote about how gene editing could be a potential treatment for rare genetic diseases. I found that really fascinating. I had known about the genetic code, but until then I didn’t know about exploring gene editing as a potential treatment for rare genetic diseases. So in college, I decided to get involved in research in this field.

Is that how you came to the Broad?

I started doing research at the Broad in the summer after my first year at Harvard College through the Harvard Program for Research in Science and Engineering. I looked for labs that were working on rare genetic diseases and also a place where I could learn, grow and become a good scientist. The Greka lab was the best fit, because Anna was doing really interesting translational work, so I had the opportunity to do something in the lab and then see how it could be translated to directly help patients. Also, everyone who worked in the lab created an environment that I wanted to do research in.

Can you tell us about the research you’ve done at the Broad?

In the Greka lab, I worked on a project led by my mentor, Dr. Moran Dvela-Levitt, which focused on investigating the mutated MUC1 gene in a rare disease called medullary cystic kidney disease type 1 (MCKD1). I came in at a very interesting time in the lab. They had already identified a small molecule, BRD4780, which they knew played a crucial role in MCKD1, and Moran was trying to understand what the BRD4780 compound was actually doing.

I started investigating whether the activity of this compound was just unique to MUC1 kidney disease, or if it could be translated to other similar diseases called proteinopathies. I studied the effect of BRD4780 on cells expressing a mutation for retinitis pigmentosa, which is a form of  retinal degeneration. We found that this compound also had an effect on retinitis pigmentosa. So we identified BRD4780 as a promising lead for the treatment of MCKD1 and other proteinopathies. The work led to a publication in Cell in 2019, which was really exciting.

After that, I was really curious about exploring what components of the BRD4780 compound were important for driving its function. Dr. Greka connected me to Dr. Florence Wagner and Dr. Brian Chamberlain in the medicinal chemistry group at Broad’s Center for the Development of Therapeutics. They became my mentors on another project, which involved finding a new synthetic pathway to synthesize BRD4780, with the aim of possibly being able to generate a method to mass produce this compound as a therapy to help patients.

What drives your desire to learn? 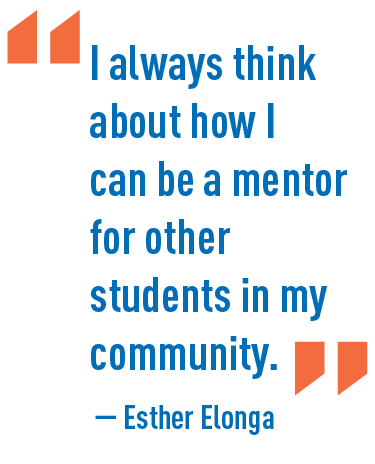 I majored in chemistry, because I love it, but am also doing a minor in education, because when I think of my background, most of where I am has been made available by having access to education and good teachers. When I came to the U.S., I was in classes with other refugees who came from places where they did not have access to education. I look at my experience, and I know I was so fortunate. I really thank God for all those opportunities that I got, because I realize that not many other students had the same opportunities. I always think about how I can be a mentor for other students in my community. So I minored in education with the hope that I might be able to impact education policy for refugees somehow.

Did you experience any challenges or obstacles in your own educational path?

In Uganda, my parents chose to live in the city, Kampala, rather than stay in the refugee camp. At the camp you get food, you get shelter, but the education was not of great quality.  So they decided to stay in Kampala to give my sisters and me a better education, but it meant we were basically on our own. And in Uganda, you have to pay to go to school, so it was hard for my parents to get money to pay for our school. My dad had some tailoring skills, so he tried to make a living tailoring and making clothes for people. But then that came to a halt when my dad got sick, and that meant that our source of income was cut. So, my mom had to also step in and try to create a business by selling Congolese fabric and jewelry. When we were finally able to move to the U.S., it was exciting that all of us would be able to go to school because there is public education, and you’re not going to be chased from school because you don't have money.

My choice to do an M.D.-Ph.D. was strongly influenced by my research background. The Greka lab had patient-to-researcher days, in which the lab arranged for patients to come to the Broad and learn about the progress of research, and also gave researchers the opportunity to learn more about the experiences of patients. This allowed me to see how research gave hope to patients. I saw that the combination of research and patient care was really strong. You could choose to do only research, but I think you miss out on patient care. You could choose to do only patient care, but you miss out on making discoveries that directly help patients. Working with M.D.-Ph.D. students and talking to them made me realize I wanted to be an M.D.-Ph.D. and be involved in translational medicine.

#WhyIScience Q&A: A computational and molecular biologist helps inspire the next generation of scientists
Perspective: What my mental illness has taught me about resilience and the importance of helping others