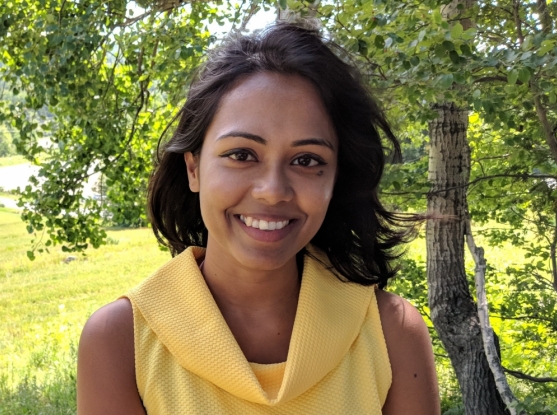 By Veronica Meade-Kelly
In a #WhyIScience Q&A, the postdoctoral fellow, who is a computer scientist by training, explains how she ended up working in the biomedical field, bringing math and computational power to bear on the fields of translational genetics and structural biology

When a 15-year-old Sumaiya Iqbal was asked about her career aspirations in a televised profile series about the most promising young students in Bangladesh, she confidently responded that she wanted to become “a scientist.” At the time, she was thinking of biochemistry, but when she went to university, it was computer science that caught her interest.

Now, what seemed like a major shift in focus has brought her “full-circle”—to a career in the life sciences. As a postdoctoral scholar in the Stanley Center’s Genetics and Therapeutics groups, Harvard Medical School, and the Analytic and Translational Genetics Unit of Massachusetts General Hospital (MGH), Iqbal enjoys a  cross-disciplinary role in the labs of five different mentors, applying her computational expertise to biology. In that role, she’s helping researchers understand how variations in genetic make-up ultimately impact protein structure and function and, by extension, human health.

Iqbal talked about her personal and professional journey with #WhyIScience:

Q: Can you tell me a little bit about your research?
A: I’m a computer scientist by training, but a life science researcher by determination. I use machine learning and scientific computing to inform genetics and, more broadly, the field of biology.

In short: mutations in the human genome are fairly common, and while the majority of them don’t greatly affect people, some can cause severe Mendelian genetic disorders. My work focuses on deciphering why these mutations have different functional consequences—specifically, what impact they have on the structure of proteins and other macromolecules that are produced in the body—using data available on those structures. Thus, I do interdisciplinary science that crosses and connects the fields of translational genetics and structural biology by applying computer science.

Q: What inspired you to jump from studying computer science to a career in the life sciences?
A: I grew up in Bangladesh, an economically underdeveloped country in South Asia. When I was 6 years old, my 3-year-old brother was diagnosed with leukemia. After failing to receive proper treatment in Bangladesh, my parents sought treatment in India. My brother, who is the bravest fighter I know, survived cancer after eight years of chemotherapy and other treatments. But he was diagnosed with other conditions later on and still has health problems. After witnessing all the ripple effects—mental, financial, and psychological—that disease can bring, I had a strong motivation to contribute to the field of human health. However, the path wasn't always clear, partly because of the lack of guidance for women who wanted to pursue science where I grew up.

But, I am extremely lucky to be the daughter of two generous-spirited people. My parents not only were models of hard work and determination, but also always believed in me, and taught me to live a vivid life full of energy and enthusiasm. They gave me the courage to take risks and confront the struggles of life. My parents and my family are the reason and inspiration for why I am here and what I do.

Q: Have others influenced you along the way?
A: Since I have ventured repeatedly into new fields, I have relied on many mentors. After earning my master's degree, I was offered a doctoral fellowship at the University of New Orleans where I was asked to use machine learning to study disordered proteins. That was my first experience applying powerful computational and machine learning techniques from computer science to molecular and structural biology data, and I owe thanks to my mentor Md Tamjidul Hoque for the opportunity—and to Christopher Summa, who helped me through that transition from theoretical computer science to protein biology. I also have to thank Keith Dunker, who kindly took time to explain “intrinsically disordered proteins” (IDP systems) to me, and then continued to inspire me with his own scientific endeavors.

After getting my PhD, I was fortunate to find my current interdisciplinary role at the Broad and MGH. It’s a role that offers the scope that I was looking for, allowing me to bridge disciplines and integrate my knowledge about protein systems and my computer science expertise with genomics. It also means that I am jointly mentored by five exceptional scientists, Mark Daly, Dennis Lal, Arthur Campbell, Florence Wagner, and Jeff Cottrell, who were all willing to mentor me as I entered this new scientific frontier.

Q: What, in your opinion, has been your biggest scientific accomplishment so far?
A: I’m extremely excited about my current project at the Stanley Center. What I have done is create a program that identifies the locations of mutations that affect protein structure and may cause disease. Using this resource, I am devising a data-driven and analytical approach to understanding the functional and biological consequences of protein-altering genetic variants in disease-associated genes at scale. We’re developing an online portal out of this project, and I believe this resource will enable the wider scientific community to explore the connection between genetic variants and structural changes in macromolecules more easily.

Q: And what do you hope to accomplish in your career, long-term?
A: I am passionate about my research. While genetics is revealing the underlying cause of many diseases, finding effective treatments still depends on understanding the impact of genetic variations on the structure and function of protein molecules so that we can intervene with targeted therapeutics. I look forward to continuing my scientific exploration in this area through a research-based academic career.

Q: What challenges have you faced in your career, and what did you learn from them?
A: Professionally, as a woman from an underdeveloped country, I’ve felt my abilities were doubted many times during my career. However, the situation changed after coming here to the U.S. and, now at Broad, I’ve found an unparalleled work experience which has not only helped me to grow professionally but also personally—so I very much appreciate the colleagues who’ve created a welcoming and supportive environment! 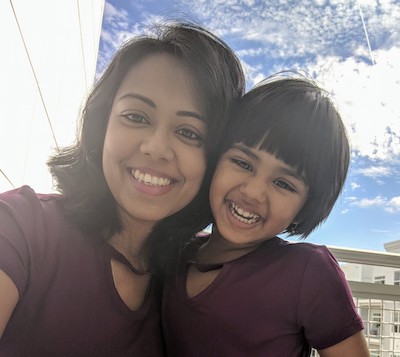 Sumaiya Iqbal with her young daughter.

I also think my constant desire to take risks and to hop through different fields has created additional sets of challenges. I’ve moved from computer science to applied machine learning to genetics and protein structural biology—and there have been barriers each time, as well as a significant learning curve. But I have to say, every time I confronted a new area, I learned more and that has only made me more confident.

Also, I am a mother of a four-year-old now! Being a mother while pursuing this career was extremely challenging. I had to learn to find the right balance between career and family.

Q: What is the best advice you have for aspiring scientists who are thinking of entering your field?
A: I personally don’t believe in gifted merit. I believe more in the power of hard work and passion and true interests. So if you are deeply motivated to contribute to human health, even if you are trained in a slightly different field, my advice is to follow your heart and jump in!

Rocky Stroud II is helping lead the largest psychiatric genetics study in Africa
A chemist, a compound, and the path from bench to bedside