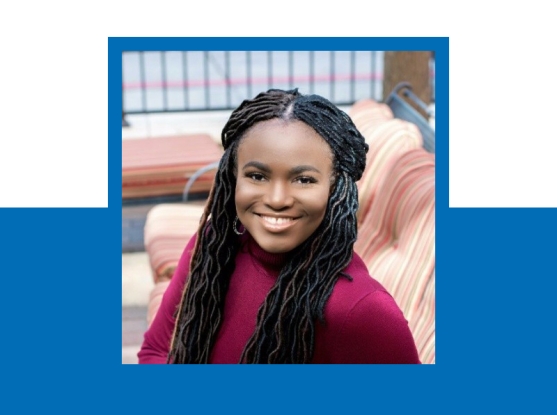 By Allessandra DiCorato
Kiara Westbrooks talks about her work in Broad’s Data Sciences Platform developing software people use to share their data with scientists.

In high school, while her mother took a summer course at the University of California, San Francisco, Kiara Westbrooks tagged along to attend a program designed to introduce girls to STEM careers. Captivated, she dissected computers and wrote simple Python programs. She knew then that she wanted to study computer science in college.

In a way, the seeds of her decision had been sown far earlier. In middle school, Westbrooks learned that she had a form of hearing loss that would worsen with time. Computers made everything easier for her — attending classes, communicating with people, forming a community, finding entertainment. And little by little, she saw assistive technology such as captioning become more widespread and frequently used.

Inspired by the engineers she saw at UCSF, Westbrooks enrolled in the computer science program at California State University in Los Angeles. After graduation, Westbrooks joined the Data Sciences Platform at the Broad Institute of MIT and Harvard as a software engineer. With her team, Westbrooks develops software interfaces to help users participate in Broad research studies. She spoke with us about her appreciation for computers, captioning, and community in this #WhyIScience Q&A.

I’m a software engineer and I focus on quality assurance. Our team works on software to support a variety of Broad research studies, from cancer to infectious disease. When my team implements a feature, I'm the one who checks it out, makes sure it meets the requirements, and makes sure it works well with features that were previously implemented. I try to think of cases that users might run into so that when we release the feature, the users get a smooth experience.

What are your favorite projects to work on?

I really like the ones where I know for sure that what I'm doing might actually help people. I take pride in that.

Recently I’ve enjoyed working on a project that we called PanCan, which is an umbrella project of the Count Me In effort. With Count Me In, patients with cancer can sign up to be part of research and donate their medical records, blood and even tumor samples for targeted genome sequencing.

Before PanCan, project participants would have to visit a specific website for their particular cancer type to join a study and enter their information. With PanCan, participants with any kind of cancer can now visit one website and select their cancer type from a long list or enter one that we haven't accounted for. PanCan is great because we'll be able to enroll and engage with more people.

You were also part of the team behind TestBoston, a six-month study that launched last year to monitor COVID-19 infection rates in more than 10,000 people in Massachusetts. What has your experience been with the study?

The study included online surveys sent to people in the greater Boston area to ask how they're doing, if they’re having symptoms or tested positive, if they were in contact with someone who they know has COVID, and if they’re working remotely.

My role was to check out the features of the website and the specific questions we included to make sure they're working correctly for people in the study. We were interested in making sure that a variety of people would be able to sign up online. Because the study was available in six languages, including Arabic, French, and Russian, my job was to make sure that the communication for users was consistent, so that the site, emails, test results, etc. were in the user's chosen preferred language. 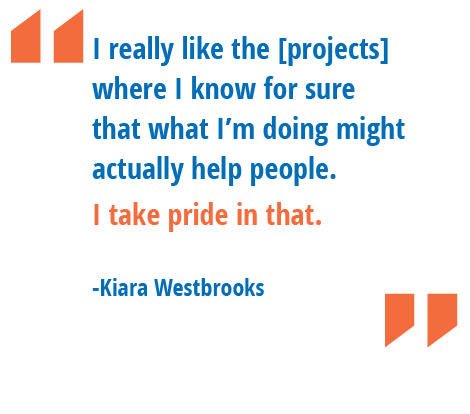 What do you feel has been your biggest success?

With a disability, particularly hearing loss, I was worried about how I would perform and whether I would be able to contribute to my team at the Broad. But it actually turned out pretty well these past four years, even if there were assignments that might have been hard. I think it comes down to perseverance. If I can't get information one way, I'm already used to just getting it another way. I didn't even learn about real-time captioning until college, but I’ve had hearing loss since middle school, so I’ve picked up a few tricks.

Can you give some examples?

In college, videos with captioning were experimental at best. The videos either would not have captioning, or I’d have to rely on YouTube's auto-captioning. To get around that for a class where a part of the lesson was recorded on video, I’d usually just set up some extra time with a captionist and I’d watch the video while they provided captions for the lesson.

I also learned to sit at the front of the class so I could see the professor clearly. And I learned to have a network of students whose notes you will ask for. You need to have a network because each student writes their notes in a different way and they each include different information. Some of their notes might not be legible. So you ask different students and do extra reading and maybe look up extra stuff online. And then you pass that test.

College was okay because by then I had captioning. But high school was a different story. Have you tried lip reading political science and economics for one or two hours, let alone eight hours a day? You crash by the end of the day. I would not have made it through college without my captions. I'm very thankful for them.

What has helped you with your work at the Broad?

I like working here because it's probably been the most supportive and accommodating environment I've been in. You ask for captioning, you got it. Lately they even added captions to our institute-wide meetings. I never expected that to happen. My team is very supportive too. If I need accommodations, they’re there.

What has it been like to navigate the pandemic with hearing loss?

The pandemic pretty much makes me stone cold deaf. With the masks, there’s no lip reading. But it's fine once you get used to it. I'm already used to hearing loss so once you have people write things down or type or text things, it's pretty much a non-issue.

Do you have any advice for students with a disability looking to go into computer science?

AccessSTEM at the University of Washington is a good organization to join because it will help you get a head start on pursuing STEM in college and in a career. I spent time there during college. People with any disability, not just hearing loss, can join. Students can apply for funding to go to conferences and events. Their program runs resume contests and encourages you. You can also get advice on job hunting and how to start your career. For example, you can ask other people in AccessSTEM when to disclose when you have a disability because that's different for everyone. It’s different for people with different disabilities, and it can also be different depending on the job or situation.

For example, if verbal communication at any point is expected to happen during an interaction, I would generally disclose. That provides information to the other person when the conversation may not be flowing as they expect or are used to — for example, I may have to use other methods such as text, pen and paper, or allowing more time for a response if we’re using captioned telephone. It also helps to disclose so the other person knows that you aren’t intentionally ignoring them if you don’t respond to a question or take longer than usual to respond. It would also help to explain behaviors like why I make sure to look at their face while they are talking, so I can lip read. On the other hand, if I'm mostly going to be talking to a person via instant messages or am accessing an event or video that is captioned, I don't usually disclose since the conversation, appointment, or event has already been made accessible to me.

I would’ve liked to have found AccessSTEM earlier because it’s nice to actually meet other deaf students. I didn't really see other deaf students until the University of Washington’s Summer Academy for the Deaf and Hard of Hearing — I had to go all the way to Washington state! — where there was a whole class of deaf students. Not being the only one in a group — it's just way better.