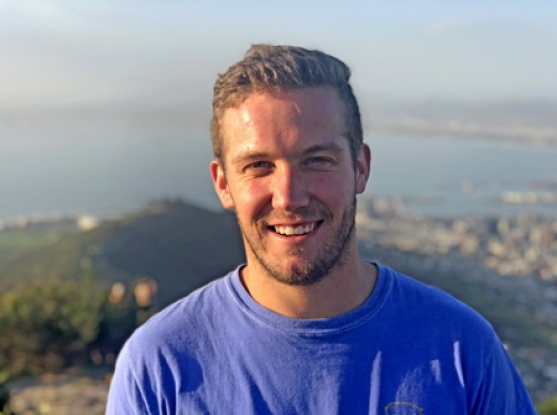 Rocky Stroud II
By Veronica Meade-Kelly
In a #WhyIScience Q&A, the NeuroGAP-Psychosis assistant program director reveals how a commitment to community service and mental health—and a chance encounter with a public health professor—led to a career building psychiatric research partnerships abroad

Rocky Stroud II was a faculty assistant at Harvard T.H. Chan School of Public Health just four years ago when, one dreary winter day, he found himself pondering best practices for managing version-control for manuscripts with multiple authors—a topic with which he had little experience at the time. Fortunately, Karestan Koenen, a professor of psychiatric epidemiology, happened to be standing right outside his office, waiting for her next meeting. Stroud seized the opportunity to ask her advice. Not only was she helpful, but as the conversation dovetailed into her own experience, Stroud was struck by Koenen’s passion for her work.

When a position opened in Koenen's lab supporting a research project that her team planned to launch in Africa, he applied immediately. A few short years later, Stroud is the assistant program director for a Stanley Center funded project called “Neuropsychiatric Genetics of African Population–Psychosis,” or NeuroGAP-P for short. The program, which last week celebrated its one-year anniversary, aims to understand the genetic underpinnings of psychiatric diseases such as schizophrenia and bipolar disorder in African populations.

Stroud spoke with us about his work in a #WhyIScience Q&A:

Q: What’s your role in NeuroGAP-P?
A: I oversee field operations—essentially, the parts of the study that take place in Africa. We launched our project in 2018, with sites in four different countries: Ethiopia, Kenya, South Africa, and Uganda. We are currently in year two of data collection. Our goal is to collect DNA from roughly 37,500 Africans in total. In fact, we just reached a milestone of 5,000 participants to end year one!

In addition to getting genetic information, we conduct in-person interviews with each of the participants to get information about demographics, medical and mental health history, trauma history, and substance use.

Q: Why is it so important to do this work in Africa?
A: To put it bluntly, genetics is failing on diversity, and that’s especially true in psychiatric genetics. While all humans are genetically very similar, there is actually quite a lot of variance between populations—and Africa has the most genetic diversity in the world. Yet most of the genetic data that has been collected is from individuals with European ancestry.

There is a lot we can learn from studying African populations about how psychosis relates to genetic makeup—which may or may not unfold in Africans the same way it does in those of European descent. If we continue to focus research just on those of European descent, we won’t get a full genetic and epidemiological picture of these disorders, and it’s likely that the vast majority of the world won’t benefit from targeted therapies that come out of that research.

Fortunately, researchers and funders are starting to acknowledge this lack of diversity and are beginning to focus more on non-European populations than they did before. In the next decade or so, genetics research and the data that comes from it will hopefully reflect the global population better than it does currently.

Q: What got you interested in this line of work?
A: My mom and my maternal grandparents always emphasized the importance of volunteering and giving back, and the community service I always leaned toward related to mental health, whether it was visiting dementia and Alzheimer's patients in nursing homes, teaching conflict resolution in publics schools, or working in mental health clinics. The brain is so complicated and intricate, and each person’s path to maintaining mental health throughout their life is so different. I’ve been really moved by the stories and experiences of the people I’ve met. I would never have imagined that I’d end up being part of the largest psychiatric genetics research study being conducted in Africa, but my upbringing certainly led me down this path.

Q: What do you count as your biggest scientific accomplishment so far?
A: I had two major accomplishments in 2018. First, we launched our research study at all five of our collection sites in the span of just eight months. Countless planes, trains, and automobiles were taken to help launch the project, and I spent many sleepless nights worrying if there were typos in the paperwork, or about losing samples, or whether lab supplies would make it out of customs that week. Although I may show some signs of premature aging as a result, we successfully launched our data collection efforts in each country and collected over 5,000 samples in just 12 months. 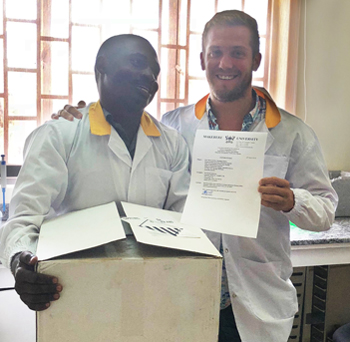 Ensuring that lab supplies and samples clear customs is one of the many challenges Stroud and his colleagues encounter in their work.

My second big accomplishment was getting my first publication in December 2018. There is something special about seeing your name as an author on a paper published in a journal; while I’m surrounded by researchers who have many publications under their belts, this one is really important to me.

Q: You mentioned all of the travel you have to do for this job. Why is it so important to do the work in the field?
A: You can’t really form relationships—at least not deep ones—over the phone, email, or through video conferencing. I’ve taken 15 trips to different parts of Africa in the last 18 months, and over that time I have developed professional and personal relationships that I know will last throughout my career. I cannot emphasize enough the power of in-person meetings and being present.

In our case, there’s also a matter of building trust. There has been a history of “safari research,” in which Americans or Europeans come for the photo ops, say "thank you" to the African researchers for the DNA and data, and then take it back to their home institutions, never to be heard from again. Our model is an integrated one. We are equals, working together to complete this research project. All parties visit each other’s institutions frequently. We do a lot of training to help build research capacity at these sites, so that our partners can do more of the work in-country, but we also invest our time in the field to build those professional relationships and learn from each other on how to be better collaborators.

Q: Being on the road so much must create unique challenges. What are the biggest difficulties you face?
A: Being in the field as often and as long as I am has pushed me mentally, socially, and physically—and not always in a good way. I get lonely, sad, and homesick at times. It’s a struggle to stay connected with family, friends, and partners who are eight time zones behind you and thousands of miles away. I also spend time in parts of the world where homosexuality is not as socially or culturally accepted as it is here in Boston. I often have to hide that part of my identity—lie and say I am looking for a wife, or use ambiguous language (partner) or pronouns (they) when talking about relationships. It’s hard to not be your full self for long periods of time.  But, do I regret any minute of being abroad? Absolutely not. I have been exposed to new cultures, new ways of thinking, and some of the most beautiful places on the planet—not to mention finding life-long friends from all over the world.

Q: What would you say is an underappreciated challenge in your line of work?
A: There are so many! One is capacity, particularly in mental health. In Massachusetts, there is roughly 1 psychiatrist for every 8,000 people. In sub-Saharan Africa, that number is more like 1 psychiatrist per every 1,000,000 people. Many of our current African colleagues do not have the luxury of being a full-time researcher. They are heads of departments, they’re running clinics, teaching courses, supervising residents, and trying to run these large research studies all at the same time.

We also struggle with translating our consent forms and questionnaires from English into local languages. Many cultures and languages do not have words or concepts for “DNA” or “psychiatric genetics” or “cloud storage.” It raises important and tricky questions about informed consent.

There are also resource inequities that undermine our mission to be equal partners with our colleagues overseas. For instance, the Broad has servers and computing power that can run analyses in record time, but does that mean we should? Why not allow colleagues in resource-limited settings to run those analyses, given the research is based in their countries and about their people, even if it takes them 5 to 10 times longer to do so? One thing NeuroGAP-Psychosis has focused on is capacity building. We donated NanoDrop machines to those labs that didn’t have them, and members of the Broad’s Genomic Platform traveled to the different sites to train local lab technicians where needed. Solutions like these help, but are just early steps in solving these inequities.