Irresistible: Lola Fagbami talks about her work on drug-resistance and the curiosity that drives her pursuit of science 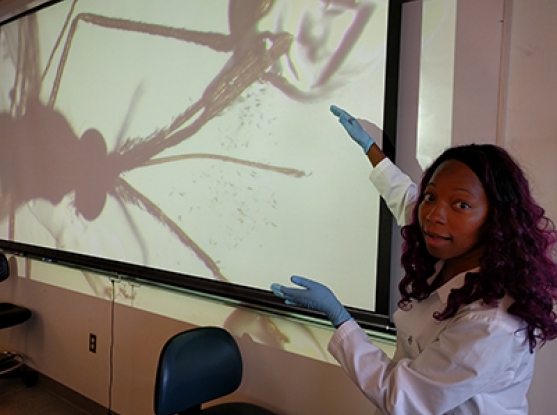 Lola Fagbami studies infectious disease, focusing on drug resistance in malaria parasites and the insect vectors that carry them.
By Veronica Meade-Kelly
A graduate student shares her motivation for tackling malarial drug resistance in this #WhyIScience Q&A

As a child, Lola Fagbami says, she “longed to understand the why behind the world.” That intense curiosity led her to pursue science, which in turn led her to her current role as a graduate student in the Chemical Biology Program at Harvard University. There, she studies malarial drug resistance in the labs of Dyann Wirth at the Harvard T. H. Chan School of Public Health and the Broad Institute, and Ralph Mazitschek at Massachusetts General Hospital.

Already in possession of two master’s degrees (in biomedical science and public health), Fagbami is now working toward her PhD. As a graduate student, Fagbami is always on the move. Since she conducts her research and collaborates across institutions, her work on any given day can take her to multiple campuses in both Boston and Cambridge, Massachusetts.

For the Broad's #WhyIScience series, Fagbami took time out of her busy schedule to discuss her work and the many scientists who have inspired her throughout her career.

Q: What is the nature of your current research?
A: I study Plasmodium falciparum, the parasite that causes malaria, in the context of drug resistance. I try to understand how these parasites are able to tolerate and evade the drugs designed to treat them with the goal of trying to prevent or reverse drug resistance.

Q: How did you get interested in studying drug resistance?
A: The phenomenon of drug resistance has always fascinated me, because it shows that the survival imperative is universal, even for microorganisms. My curiosity about this problem led me to study in oncology, microbiology, and infectious disease laboratories. However, it was my personal experience with malaria, having contracted the disease as a preteen in Nigeria, that helped me make the choice. I came to understand then how the loose drug regulation mechanisms and treatment practices in some parts of the world could be contributing to antimalarial drug resistance. It’s exciting and inspiring to have the opportunity to potentially resolve a problem that afflicts some of the most underserved people in the world. 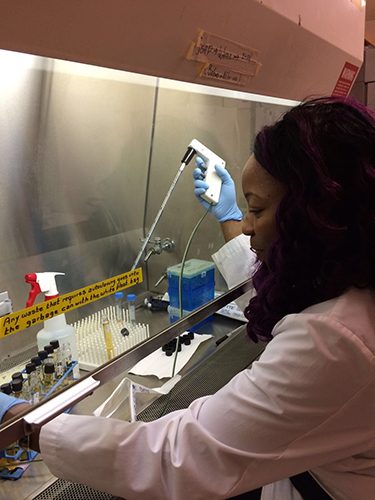 Fagbami at work in the lab.

Q: Are there particular people who have shaped your approach to research?
A: I have been blessed with wonderfully supportive mentors who have challenged me to attempt things I did not consider myself capable of: David Lynn at Emory University taught me the importance of specialization and the value of a good question. Eberhard Durr at Merck Research Laboratories showed me that hard work and a willingness to learn can make any field accessible to me. Steve Carr here at the Broad taught me about calculated risk-taking and how to recognize opportunities. My graduate school advisors, Dyann Wirth and Ralph Mazitschek, inspire me daily with their passion for new knowledge and their prioritization of their teaching responsibilities. The impact that my mentors have had on my life and career has inspired me to undertake an academic research career with a focus on teaching and mentoring.

Q: I know that you know a lot about scientists of the past as well. Is there one you find particularly inspiring?
A: Ada Lovelace was a 19th century English mathematician and writer who saw the potential of the analytical engine to develop into what became modern computing. Despite a sickly and somewhat neglected childhood, she focused on the thing that interested her the most, mathematics. I find a lot of inspiration in this quote of hers: “That brain of mine is something more than merely mortal, as time will show.” It tells me that confidence in yourself and your abilities is a prerequisite to doing great work.

Q: Is there a message you would like to share with someone entering scientific fields today?
A: As a scientist, I get to wake up every day and ask questions that I find interesting. I can think of no better job. For anyone pursuing science as a career, my advice is to always remind yourself that, every day, there's the potential that you will be the first human to learn something completely new. Remembering that makes the challenges easier to bear. As Carl Sagan said, “Somewhere, something incredible is waiting to be known." To that, I’d add: “It’s waiting for you!”