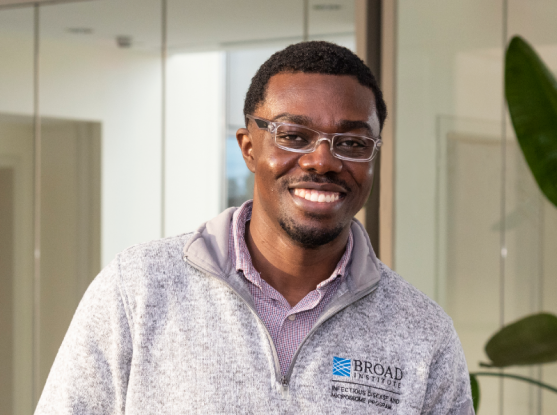 Credit : Allison Dougherty, Broad Communications
By Calley Jones
Research fellow Pierre Ankomah discusses what brought him to the United States and the mentors who helped him along the way.

As a teenager, Pierre Ankomah planned to live his entire life in Ghana. As he was finishing high school, however, his mother studied in the United States for a semester and encouraged him to attend college in the US. She thought a liberal arts education would allow her son to explore his many varied interests before selecting a career path.

Ankomah took her advice and attended Franklin & Marshall College in Pennsylvania, where he became fascinated with microbes and infectious diseases. He earned an MD/PhD at Emory University and did an internal medicine residency at Massachusetts General Hospital. True to his theme of “walking many lanes” and maintaining many interests, Ankomah is currently both a clinical fellow in the Mass General Brigham Infectious Diseases program and a research fellow at the Broad Institute of MIT and Harvard.

At the Broad, under the mentorship of Roby Bhattacharyya and Nir Hacohen, Ankomah investigates how the immune system mediates sepsis — the body’s life-threatening reactions to an infection. He is learning why some patients recover from sepsis quickly while others experience severe disease, remain ill longer, or relapse. Using single cell RNA-sequencing, he studies how different types of immune cells react in sepsis and whether those cellular behaviors underlie the vast differences he’s seen in how sepsis patients fare.

We spoke with Ankomah about his passion for infectious disease research; his unique perspectives as a physician-scientist, a Black researcher, and an immigrant; and the people who supported him throughout his journey.

Q: How did you become interested in infectious disease research? 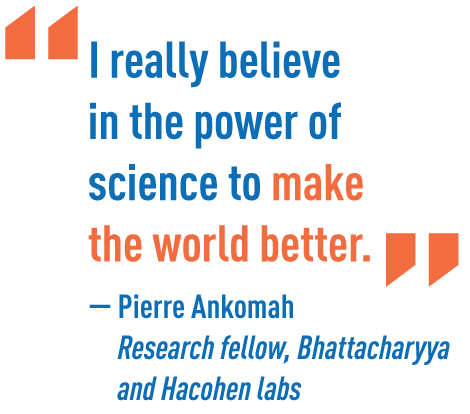 As my interests in biology and medicine were getting crystallized, infectious diseases just kept rising to the fore, because they’re such a predominant problem in West Africa where I’d grown up. I took this college course in microbiology, and one of my professors got me really thinking about populations of microbes. It wasn’t just E. coli strewn on a plate. In a bottle, billions of individual bacteria are communicating, growing, dying — there’s a remarkable amount of very sophisticated dynamics going on in there. I realized I could use differential equations to understand some of these processes and make predictions about some of the dynamics.

It sounds cliche, but I really believe in the power of science to make the world better. Coming from a place where infectious diseases are a major cause of mortality, I felt like treating them in the clinic and learning more about them in the lab had the potential to impact people’s lives.

Q: Tell us a bit about your current research project.

For many clinical syndromes, we know a lot more about the microbes than we do about the hosts. The way we think about the hosts is a little simplistic. We lump people together as immunocompromised hosts or immunocompetent hosts, and for a lot of things, we treat all patients in each of those groups the same way. Seeing a lot of these patients, I realized there’s such a remarkable heterogeneity among patients we lump into the same category. I kept wondering what immune signatures were different between these people.

My focus is on further characterizing the host immune transcriptional profile in sepsis — in particular, thinking quantitatively about the relative proportions of different immune cells and how those change over time in different patients. Maybe when we understand this, we’ll be able to better treat people and say, “You are mounting this type of immune response, you need to be treated this way.”

Q: How does having both research and medical training shape the way you approach your work?

One of the things that keeps me grounded is the practical nature of scientific advancement. I’m trying to contribute whatever little I can to scientific progress, while staying focused on the ultimate goal of impacting patients. If we make these advancements or answer these questions, how does it affect somebody I see in the hospital? It always directs the kind of question I’m interested in pursuing.

Q: What are you most grateful for in your professional journey?

My peer mentors. There have been many times where I would think, “I’m not cut out for this. I can’t do this. This is beyond me.” A lot of the time, the people who have helped me navigate those moments of stress and doubt have been my peers, who have been honest about their own struggles and concerns.

There are so many things I owe to somebody else who knew a lot better than I did and said, “Come sit with me today. I’m going to show you how I did this.” The clinicians who said, “This was a problem for me two years ago. I’ll show you how I dealt with it.” The scientists who said, “I’ve done this assay many times. I’m happy to walk you through it.” I sometimes still feel a bit like an outsider in each of those spaces, and I’ve only been able to navigate that with the help of good peer mentors.

Q: Have there been other ways mentors have helped you?

I think there’ve also been people who have been mentors to me but haven’t known it. It’s hard to be what you can’t see. I think the times where I’ve seen this Black person, or this immigrant, doing an MD/PhD program — I thought, okay, well maybe I can do that too. This Black person, this immigrant, is working at the Broad Institute. Okay, maybe I can do that too. I am proud that the Broad supports and showcases the diversity of people who work here because I think it’s inspiring and reaching people in a way that is hard for us to fathom.

Q: What advice would you give to others looking to follow in your footsteps?

Be curious. I think if you’re curious and you’re humble and you pick good mentors — people who understand the path that you’ve walked and understand where you want to go — those people can help provide you with resources, put you around other people, and put you in the right settings to try and get you where you need to go. My current mentors at the Broad have been particularly exemplary at guiding me this way. You can’t just watch YouTube videos or read textbooks. It’s really about surrounding yourself with good people — good peers, good mentors.

For a minority coming into science, I would add: don’t worry that the path you walk isn’t the same as other people’s paths. There’s always going to be something that, by virtue of you having seen what you’ve seen, having lived where you’ve lived, having done what you’ve done — you will bring something different and useful.