#WhyIScience Q&A: How a clinical researcher navigates science as a trans nonbinary person 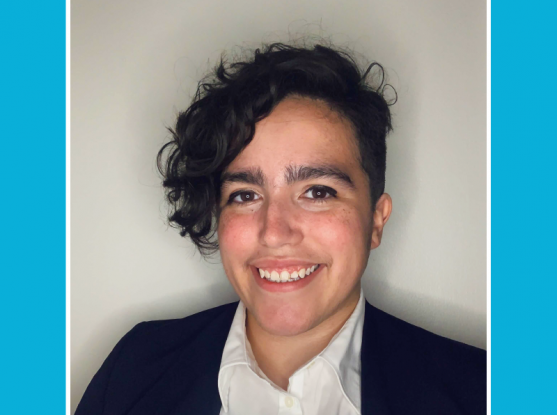 Credit : Delia Sosa
Delia Sosa is a clinical data specialist at Count Me In
By Natalia Mesa
Delia Sosa talks about how their experiences shape their approach to research and their interactions with patients.

In the summer of 2021, after several US states introduced legislation to limit or criminalize gender-affirming care for trans people, Delia Sosa created “Nonbinary Bodies,” a digital art piece that features a simple, handwritten message: “Nonbinary bodies are still bodies.” As a trans nonbinary person, Sosa is acutely aware of how difficult it is for many trans and nonbinary people to receive even basic health care. Sosa, a clinical data specialist at the Broad Institute of MIT and Harvard who uses they/them/elle pronouns, began making art earlier this year to educate others, especially health care providers, about the experience of being trans nonbinary. 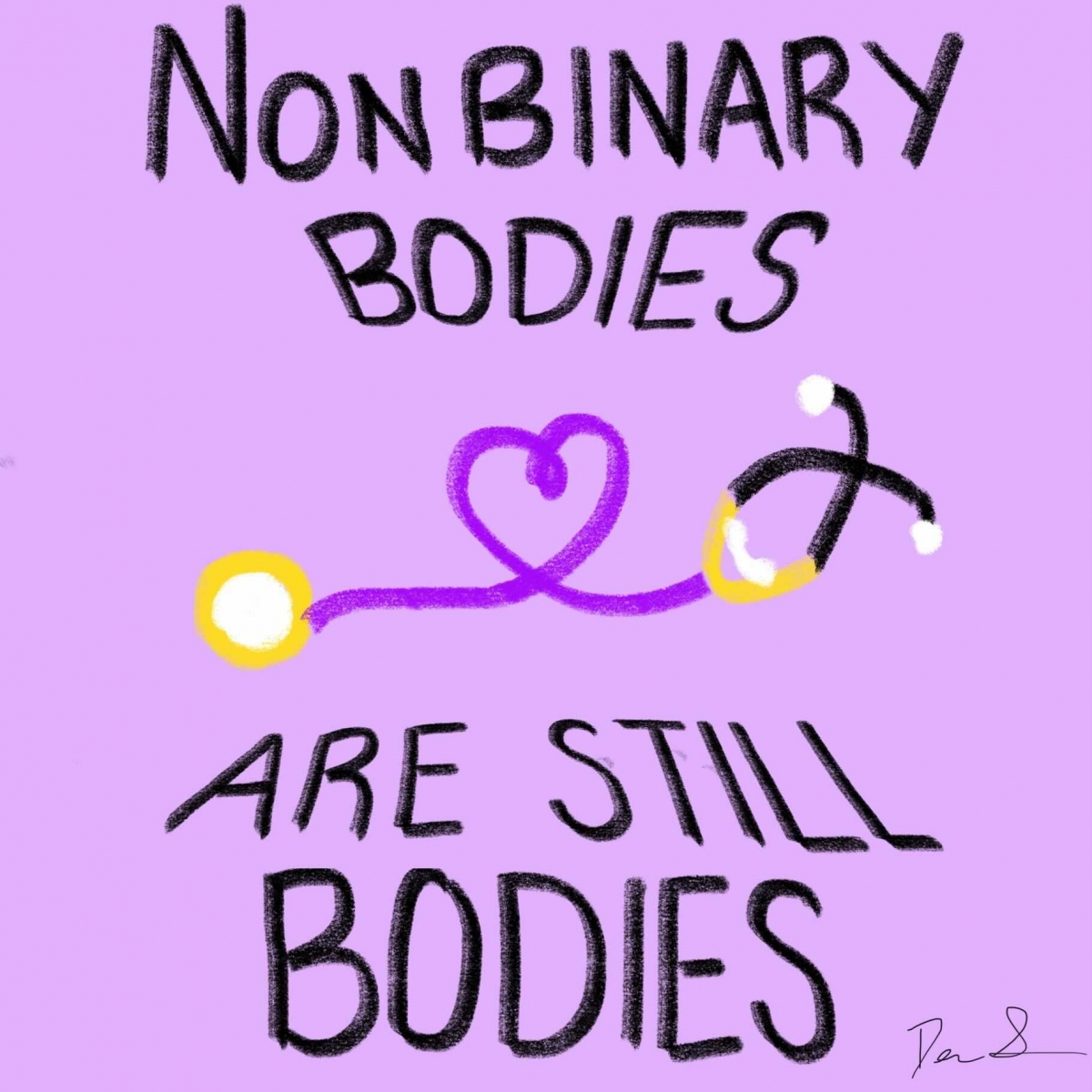 At the Broad, Sosa works with Count Me In (CMI), a nonprofit, patient-partnered cancer research initiative led by the Broad, the Dana-Farber Cancer Institute, and the Emerson Collective. Sosa was drawn to CMI because of its strong patient focus. CMI engages directly with patients to collect samples, patient histories, and experiences to accelerate the pace of cancer research.

Sosa joined CMI out of a desire to help patients, which began at a young age. They were raised by a father from Puerto Rico and an Irish-American mother in a small town in Rhode Island. Intending to study medicine, Sosa went to the University of Chicago, where they studied sociology and pre-med. They then completed a one-and-a-half-year master’s degree in biomedical science at Tufts University before coming to the Broad in July 2020.

Sosa’s eventual goal is to become a physician who helps trans and nonbinary people access adequate health care. We spoke with Sosa about their work with Count Me In, their advice to young scientists, and how their identity has influenced their career.

I’m a clinical data specialist for Count Me In, which involves reading through patients' medical records and pulling pieces of information to help piece together their clinical timeline. The work that we do with CMI is really patient-partnered and patient-focused, which is what I love about it. When we’re pulling information from medical records, we try to understand what the patients have been through clinically and connect that back to their genetic and genomic data. That information gets put into a public database, which researchers across the world can use to design future research studies.

Having family members with really complex medical histories and being a person living with some hidden disabilities myself, it's been really important to remember that the patient is at the center of everything that we do in clinical research and medicine.

As a future clinician, what kind of care do you hope to provide for patients?

I am a nonbinary person and I also identify as transgender. Based on my experiences as a nonbinary person interacting with the healthcare system and a lot of experiences of other trans and nonbinary people trying to access health care, I know I want to provide gender-affirming care to trans patients. However, I want to focus on specialties that are less addressed for trans folks. A lot of people who end up doing gender-affirming care will go into primary care, surgery, or reproductive care. But it can be really difficult to find just basic health care, specialty care, or emergency care, since healthcare providers in those spaces often haven’t had education on  what it means to be transgender or nonbinary or how to treat trans and nonbinary patients. Those are the sorts of problems I’d like to address.

How has your identity influenced your work?

Existing at the intersection of so many different marginalized identities, being a LatinX person, being a trans nonbinary person, and being a person with disabilities, has made me think about inclusion and accessibility from a lot of different perspectives. I’m really sensitized to questions like: do we have ways to address our processes so that people aren't running into roadblocks when they're trying to participate in our research? Are we creating roadblocks inadvertently with the way that we're structuring our surveys, doing our research, or disseminating information? Just having had all of these lived experiences has made me think about all of these things a little bit more. While I can't feel everything that the patients that I will interact with will feel, and while I haven't had exactly the same experiences that they've had, I feel like the experiences that I've had have made me more empathetic to what they are living through.

What are you trying to express with your art? 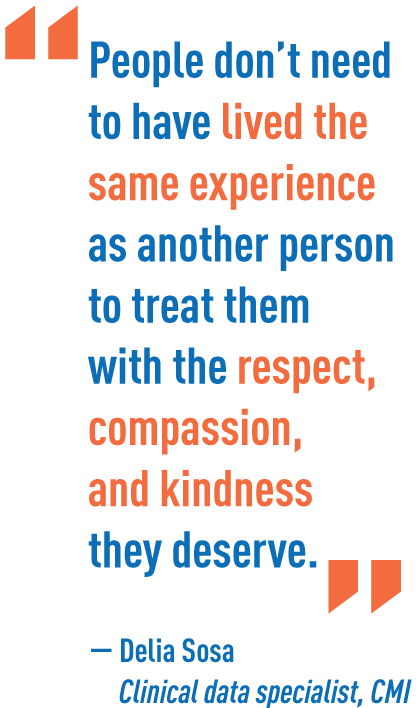 It’s always something I liked to do for fun, but I've noticed, especially in the last couple of years, that there have been people in the trans community who have been creating artwork as a form of community-building and as a form of education. And I wanted to be a part of that because I am the type of person who, when I have an experience about something, I want to talk about it and I want people to understand. We live in a world where gender is so often understood as this binary thing and I want to show people that nonbinary people are just people. I want to try and help people understand more about what being nonbinary means and how nonbinary people are treated to see if we can enact some sort of cultural shift as part of a larger movement within the nonbinary community.

With that particular piece, “Nonbinary Bodies”, I want people to understand that no matter what, trans people are people and need basic health care. I wanted this piece to be a reminder that people don’t need to have lived the same experience as another person to treat them with the respect, compassion, and kindness they deserve.

What is some advice you have for young researchers?

The biggest thing is finding community. I was really lucky in the process of figuring out who I am, at least in terms of my gender identity, that I had people around me who, if they hadn’t been through something similar, were at the very least supportive. Finding spaces where you can speak openly about what you're going through and finding people who understand what it feels like is the best form of support that you can find.

The other piece of it is finding a mentor that you can trust. I've been really lucky in Count Me In to have a couple of mentors who are not trans nonbinary themselves, but they are two of the most empathetic people I have ever met. And they just want to see the people that they're mentoring flourish and do well, not just as scientists and not just as working people, but as human beings. And I think finding a mentor who is respectful of who you are and wants you to succeed in all facets of your life makes a world of difference.