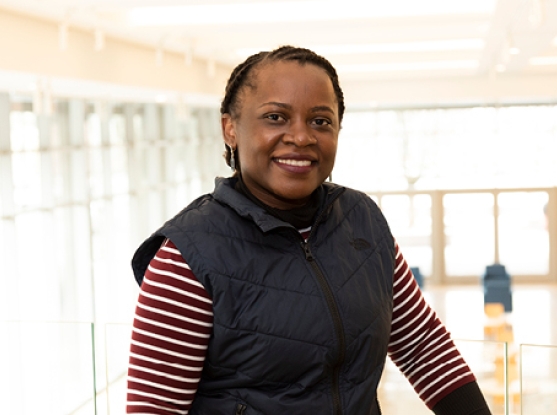 Credit : Allison Dougherty, Broad Communications
Anitta Namanya is on Broad's Information Technology Services team.
By Nora Bradford
Anitta Namanya discusses her work as an information security engineer and her involvement with the Black community at Broad.

As a child, Anitta Namanya could regularly be found rewiring the TV and other gadgets around the house. When her father came home with a cell phone, she noticed it was not connected to the wall and immediately wanted to understand how it communicated with other cell phones without any wires. She remembers thinking, “I want to be an engineer to figure that out.”

After receiving a bachelor’s degree in telecommunication engineering in her home country, Uganda, Namanya decided to move to the United Kingdom for a master’s degree in network and performance engineering. After graduating, she transitioned into cybersecurity and obtained a Ph.D. in computer science from the University of Bradford.

Now at the Broad Institute of MIT and Harvard, Namanya is a principal information security engineer with the Broad Information Technology Services (BITS) team. She works to protect the Broad community by identifying, communicating, and mitigating technology-based risk. She is part of a team that builds tools to identify vulnerabilities in Broad systems and protect data and systems from bad actors.

Since joining Broad, she has also been on the steering committee of Africans, African-Americans, and Afro-Caribbeans at Broad, or A4C, an affinity group for Broad employees. And she works to raise awareness about inclusion, diversity, equity and allyship (IDEA) as an IDEA Ambassador within BITS. In 2020, Namanya participated in an internal initiative called Black Broadies Speak, which highlighted and amplified Black voices within the Broad community.

In this #WhyIScience Q&A, she spoke with us about her passion for computing and cybersecurity as well as her journey finding and building community at Broad.

I actually wasn’t really interested in computer science from the very beginning. My first love was engineering. What made this dream seem achievable was seeing this prominent woman engineer in Uganda, who was my area representative at the time: Eng. Winnie Byanyima. She seemed so cool and I knew I wanted to be like her.

During my undergraduate program, one of my favorite teachers took us through the basics of computer science and programming. It was in that class that I grew to love computer science. Getting a program to do what you wanted it to do was so rewarding for me.

How did you decide to transition out of academia?

While getting my Ph.D., I had two advisors: one in academia and one in industry. My industry supervisor was actually head of research at a cybersecurity firm in the UK. Towards the end of my Ph.D., I worked part-time there and I realized that most of the developments in cybersecurity from industry tend to be further ahead than those from academia. I wanted to go into industry to see things actually happening in practice, because there's only so much you can simulate when you're in academia.

What brought you to your current job?

After I had my second baby, I decided I wanted to get back to work, so I refreshed my CV and started applying to jobs. I think it was two days after I updated my LinkedIn, someone from Broad reached out to me and said they were looking for someone in security. So I went looking around trying to find out what the Broad Institute does and when I saw that they were trying to do things like cure cancer, I thought: “Sign me up!” All I needed to hear was that they were trying to make life better for everyone. I remember coming in for an interview and meeting so many relaxed and friendly people. So when I got the offer, I jumped at it!

What has been your favorite part of your current job?

I think my favorite part is seeing us make people more conscious about security. We had this meeting recently with other people in BITS. I noticed that all of the concerns related to information security weren’t coming from the security people there. I was so glad to see people from outside of the InfoSec team think about security in their everyday life, in their everyday work. That's always very interesting and to me, influencing people to actually be conscious about it is one of the best things about working in security. Plus, I have an amazing team. Carroll Hawkins, Karthik Keshava, Becky Kuzma, Mathew O’Brien, Wiliam Hedglon and David Bernick all make work really fun. 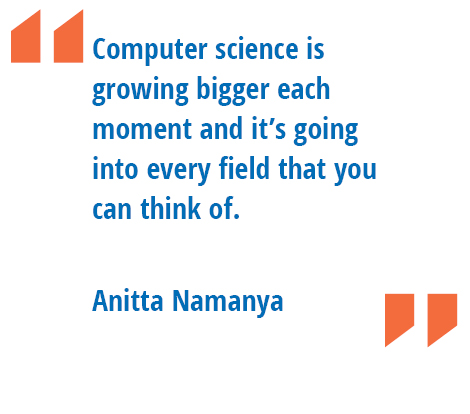 Being an immigrant from a mostly Black country and also coming in from the UK, where I was very much in a heavily immigrant community, moving here was a shift. Living in the UK, I was mostly categorized as an international student, not as Black. So when I moved here, with everything going on, especially with the murder of George Floyd, I was shocked. Being Black became an identity that I felt would help me group with some other people who were going through similar things. So I joined A4C around that time and I remember logging into the virtual meeting room and seeing all these Black faces. They somehow understood what I was going through without me telling them. It was amazing!

As a Black person at Broad, I’ve been very lucky because most people here, especially the white-identifying members, are allies. Most of them have been involved in Black Lives Matter and they will actually listen and be part of the conversation. I think that's such an amazing culture to have. I just wanted to say as a Black person, I appreciate that. I appreciate having allies in our space. So thank you and keep doing the best you can do and don't be scared to get it wrong. You never know, you may get it right!

How did you get involved with Black Broadies Speak?

I remember Ana Foley, who is one of the A4C leaders, coming up with this idea of Black Broadies Speak to make people in the Broad community more aware of what it means for us, Black people, to be in America at a time like this. I normally write poems and stories in my own time and most of them are not finished, but I had one piece that I thought I could expand on and contribute to Black Broadies Speak.

After I shared it, it was so nice to hear different people, especially immigrants, relating to what I had written. It made me feel less alone in all this. There's something so fulfilling about feeling like you're not alone. It makes you feel lighter.

What is the biggest challenge you’ve faced in your career so far?

I think the biggest challenge in my career has been imposter syndrome. There will always be times when I feel like I’m not good enough or question myself. Even when I know that I know the answer to a question and I should be able to answer it correctly, I question whether I’m 100 percent right or only 70 percent right. It leads to other questions like, “Am I even supposed to be in this space? Am I in the right space?” I’m still trying to find ways to navigate it and reduce my perfectionism.

What advice would you give to young people interested in computer science and technology?

Be curious and try to learn as much as you can. Computer science is one of those disciplines that you can't put in one area. It’s growing bigger each moment and it’s going into every field that you can think of. So if you can be curious about it and just learn the basics of computing, you can connect it with any other passion you have. Plus, these days, learning programming is more accessible than ever. You just have to have a laptop! There are also so many certifications out there so that you don’t have to take the traditional route by studying it in school. It’s good to have a degree, don’t get me wrong, but the certificate route is also valid.