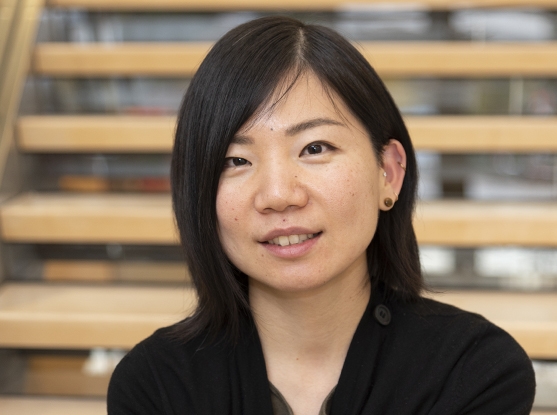 As an undergraduate studying biology in Japan, Junko Tsuji suspected there were quicker ways to do research. For her capstone project at Soka University, she had been helping to develop a device that could separate individual cells for experiments, a project that required her to visit the lab daily to keep the cells alive. She wondered if a computational approach could make these experiments go faster, so she began learning about the emerging field of bioinformatics by enrolling in one of the university’s first classes in the field. “I was so impressed that a computer could do biological analysis so quickly,” she recalled. The experience inspired Tsuji to later pursue graduate studies in the newly launched computational biology department at the University of Tokyo, where she explored the role of mitochondrial DNA in the nuclear genome.

After earning her Ph.D., Tsuji moved to the U.S. for a postdoctoral fellowship at the University of Massachusetts Medical School in Worcester, where she analyzed large-scale sequencing datasets to understand how the genome is regulated. When she arrived, Tsuji could only understand a third of what was spoken to her. And the first traffic jam she encountered was a flock of geese crossing the road, a much slower pace than the busy cities of her youth.

Over time, her life in the U.S. became easier and more familiar — she improved her English by watching American TV and relying on the help of friends, and later moved to a more bustling neighborhood closer to Boston. After completing her postdoc in 2017, Tsuji joined the Broad Institute of MIT and Harvard as a computational scientist in the Genomics Platform. There, she built and optimized tools for analyzing and ensuring quality control of genetic sequencing data. More recently, she transitioned to a role as a computational scientist in the lab of institute member Gad Getz within the Broad’s Cancer Program, where she supports studies of cancer that utilize single-cell RNA data.

In this #WhyIScience Q&A, Tsuji talks about her earliest scientific inspirations, the challenges of working in a young scientific field, and advice for aspiring computational scientists.

I’ve always been driven by curiosity, which sometimes brought me trouble. As a child in Japan, I used to raise insects, such as butterflies and beetles. I became fascinated by these caterpillars covered in hairs that would drift off in the wind, so one day I picked them up to get a closer look. I didn’t know the hairs were irritating, and the next day, I developed a full-body rash.

The rash faded, but my curiosity stuck with me through my schooling. The Human Genome Project was completed while I was in middle school, and my mother bought me the book Genome: The Autobiography of a Species in 23 Chapters, which I found really inspiring. I thought I might like to one day work in this field, so I took some science courses later in high school. I grew up in a seaside town and spent more time surfing than I should have, but by the end of high school, I buckled down and refocused on my studies so I could pursue science.

How has your role grown and evolved since you joined the Broad Institute?

I was initially drawn to the Broad because I wanted to work in between academia and industry. After losing my grandparents to cancer and seeing my mother battle it and survive, I wanted to support research that was closer to the medical field than the basic science work I’d been doing in my postdoc. When I learned of the position in the Genomics Platform, it seemed like a great opportunity to work with actual human data. The platform’s leaders wanted to build a computational team to ensure the quality and accuracy of data it produced, and I was part of a group focused on exome sequencing data for cancer studies, including clinical trials.

I enjoyed the work, but became more and more curious about how the data was being used after it was returned to our collaborators, and I wanted to be part of that downstream discovery phase. I was fortunate to be invited to join the Getz lab, where I’m helping to analyze single-cell RNA sequencing data to understand the microenvironment of multiple myeloma, among other things.

What’s most rewarding about your work?

I’m excited by work that contributes to new scientific discoveries. For example, when we work with a new machine or a new experimental protocol, there’s often mysterious noise in the data, so finding the roots of that noise and helping to eliminate it is a crucial part of the scientific process and is incredibly rewarding.

In addition, during my time in the Genomics Platform, I was able to support a clinical trial from the Dana-Farber Cancer Institute of its NeoVax cancer vaccine. We employed an entire suite of analytical tools in the workflow to analyze tumor specimens and identify potential targets, and it was a complicated pipeline. It was very meaningful for me to take part in that study and help return actual patient data to the hospital.

I also want to share that as an Asian female who is an immigrant and member of the LGBTQ+ community, I identify with multiple minority communities. This has brought some challenging moments in my everyday life, but in the scientific world, I’ve found that people simply want to share knowledge and learn about each other. The ability to be myself and be appreciated for my uniqueness is something I really enjoy about being a scientist today.

What’s most challenging about your work?

Single-cell RNA data is a relatively new data type, so there aren’t yet standard tools used by everyone in the field. That gives me more freedom and room to explore, and stimulates my curiosity. At the same time, it can be difficult to come to a consensus with collaborators on the best tools or approaches to use, so that can be challenging.

How has mentorship influenced your career?

My graduate advisors at the University of Tokyo, Paul Horton and Martin Frith, are an American and a Briton, respectively, who each speak several languages. Paul and Martin immigrated to Japan and each built a diverse research team there with scientists from different countries. I always aspired to travel internationally, but never considered building my career and living outside of Japan. They showed me that was possible.

Paul also brought some of us students to the government research institute in Japan where he had an affiliation. This experience drove home to me that science is not a specific location or country, and that it goes beyond borders. I was impressed to see the bonds that scientists make, and the friendships that come out of collaborations. I see it at the Broad now — scientists from all over the world coming together to tackle the same problem. I’m always excited to see the exchange of knowledge and building of friendships through research.

What advice do you have for young scientists interested in computational biology?

Computational biology is a very interdisciplinary field, spanning computer science, mathematics, biology, and so on. You’ll likely work with people who found their way there through different paths.

So for students who are interested in this field, you’ll need to diversify, but you can set yourself apart by building your skills in one particular area. Those who excel in computer science will gravitate towards tool development, those skilled in mathematics can focus on algorithm development, and the biologists can shine in analysis. Then when you all come together as a team to solve a problem, you’ll create great science for sure.