#WhyIScience Q&A: A cancer researcher has traveled the world to pursue her dream of developing better treatments

Credit : Allison Dougherty, Broad Communications
By Allessandra DiCorato
Farzaneh Kordbacheh talks about her drive to study biotechnology and what it’s been like to do research on three continents.

On March 18th, 2020, Farzaneh (Farzi) Kordbacheh was one day away from starting her dream job as a researcher at the Dana-Farber Cancer Institute when she got a phone call. She learned that the institute would pause its research in two days because of the uncertainty of the pandemic, and she should cancel her plane ticket from Australia. No one was sure when in-person work would resume.

Kordbacheh was crushed. She’d sold everything — her house, her car, her personal belongings. Suddenly, with international travel restrictions in place in Australia due to the pandemic, her dream of moving to Boston to study how cancer patients respond to immunotherapy seemed uncertain.

But Kordbacheh was used to adapting. She grew up in Tehran, Iran and at age 18, moved away from home to Shiraz, Iran to complete a bachelor’s degree in cell and molecular biology at Shiraz University. She returned to Tehran to work towards a master’s degree at the National Institute for Genetic Engineering and Biotechnology before moving to Canberra, Australia to pursue a PhD at the Australian National University (ANU). There, she uncovered a series of small molecules that inhibit or promote angiogenesis, the growth of blood vessels, to help treat cancer, stroke, and cardiovascular diseases. After graduating, Kordbacheh completed a year-long oral oncology postdoc in Brisbane, Australia and returned to Canberra for five years to work on drugs that are now undergoing clinical trials for sepsis and Covid-19 in Europe and Australia.

Kordbacheh had been working towards a future in drug discovery and development, and was excited in early 2020 to take her next step in the United States. A few weeks after that heart-breaking phone call, she applied  for and received a travel exemption. She arrived in Boston in May 2020 and soon after began working at Dana-Farber, looking for biomarkers of immune evasion in patient tumors and plasma samples collected before and after immunotherapy.

Kordbacheh now works at the Broad Institute of MIT and Harvard as a Research Scientist II in the Cancer Program, where she works under the direction of institute director Todd Golub, studying the genes and microenvironment factors that tumor cells rely on to spread throughout the body. She is also a co-chair of Women@Broad, a group that supports trans and cis women and other marginalized genders at the Broad; a co-chair for the Staff Scientist Development Committee; and a member of the Annual Scientific Retreat Organizing Committee and the Culture and Community Committee at the Broad.

We spoke with Kordbacheh about her career and drive that have taken her around the world in this #WhyIScience Q&A.

What are you working on now?

I'm part of a team called MIDAS, which stands for microenvironment dependency assessment screening. We use xenograft models of human cancer cell lines and develop novel high-throughput in vivo assays to uncover cancer dependencies in a range of microenvironments, which can aid in the discovery of potential therapeutic targets. I also lead studies on the interactions between tumor and stromal cells and am working on establishing 3D cancer models for screening potential drugs. We collaborate with many groups and platforms at the Broad including the PRISM (Profiling Relative Inhibition Simultaneously in Mixtures) group, the Cancer Dependency Map, the Tumor Immunotherapy Discovery Engine, the Center for the Development of Therapeutics, the Genetic Perturbation Platform, and the Optical Profiling Platform.

From a very early age, I always wanted to be a doctor. When playing with my friends, I always pretended to be a doctor and made medicine for them. In high school, all my teachers thought they’d see me as a medical doctor because I was the top student.

But then I heard about the power of biotechnology — creating new things, cloning things, making things happen. In biotechnology classes, I learned how genes are regulated and can be manipulated. It was just a fascinating world for me, and I decided to get a PhD in molecular biology and biotechnology.

As the top student in my class, I was selected to work on a project that involved the production of edible vaccines and therapeutics for my MSc thesis in Iran. We used plants not only as a model for their post-translational modification mechanisms but also as a source of therapeutics that could be consumed as food. I worked on expression and organelle targeting of the human calcitonin hormone, which is responsible for calcium homeostasis. When prescribed as a drug, it inhibits bone resorption and results in increased bone mass in patients with osteoporosis.

I had to design the genomic sequences and constructs, isolate and identify the protein, and perform the functional bioassays. I really loved my project because it had therapeutic value for patients and it taught me how to design, execute, and analyze an experiment while being independent and conducting collaborative research.

How do you hope your career will evolve?

I started my career with a clear passion for helping patients. We are in an era where the emergence of new technologies has made incredible discoveries in science possible. Things that were dreams not that long ago like human genome sequencing have now become common practice in our daily research.

My goal is to continue doing whatever it takes — embracing science, promoting collaboration and innovation, designing novel models, developing assays, mentoring new generations of scientists — to get one step closer to curing different cancers.

What do you find most rewarding about your work? 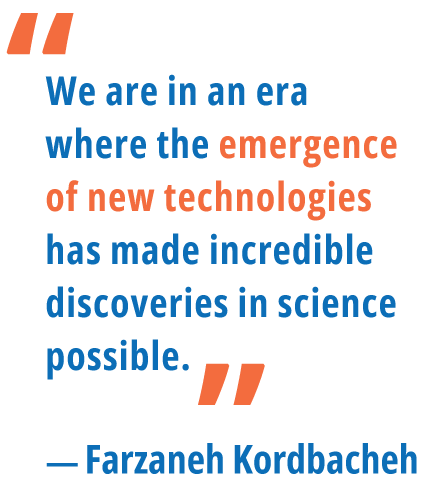 The opportunity to improve patient health is the most rewarding part for me. I am very pleased that part of my scientific journey led to a drug developed for sepsis that is currently undergoing clinical trials in Australia and Europe. The first patient in one of the trials admitted to ICU in a critical condition was able to walk out within hours of receiving our drug. My mentor in Australia, Chris Parish, called me on the phone when that happened and said, “You should be the first person I give this news to! You made it happen.” That moment was one of the most rewarding in my career.

A career in science also has given me the opportunity to meet with students and researchers who are forming the next generation of brilliant scientists. The privilege of working with them and watching them thrive on their scientific journey is also extremely rewarding.

What work do you do with Women@Broad?

Over the last 20 years of my scientific career, I have always advocated for women and early career scientists across the world. I joined the steering committee at Women@Broad when I joined the Broad Institute in August 2021. Shortly after, I became the deputy chair and then a co-chair. At Women@Broad, my goal is to promote the diverse and inclusive culture of the Broad, advocate for equitable treatment, and empower women to reach their full potential.

We organize multiple events throughout the year including a four-week symposium to celebrate Women’s History Month in March. We also build community and partner with other identity-based affinity groups to build a culture that prioritizes safety, wellbeing, inclusion, and support. We also respond to current issues in the news by raising awareness, addressing concerns, identifying opportunities to help, and forming support groups.

Have you had any mentors who have made a big difference in your career?

Chris Parish, my PhD supervisor at ANU, was my first mentor. I learned a lot from Chris, not only in science, but also how to be a kind, understanding, and caring leader. Chris’s lab is known as the “Parish family” because of its supportive and friendly atmosphere. I still FaceTime him and his wife every couple of weeks.

My other great mentor was Steve Hodi at Dana-Farber Cancer Institute. I am very grateful for his support during all the uncertainties caused by the pandemic. In his lab, I learned a lot about how to design and conduct patient-oriented translational research.

And now, I look up to Todd Golub. I not only admire him as a strong leader but also as a knowledgeable, understanding, and influential scientist. I am very happy to be a member of his team and to have him as a mentor.

I would also like to express my sincere gratitude to all my incredible PIs, colleagues, and friends around the world for sharing this amazing journey with me. I would like to thank the MIDAS team and all the Golub lab members for their warmth, kindness, and support.

What has it been like to move around the world?

I have lived, studied, and worked in three different countries. In high school, when my path was becoming clearer, cell and molecular biology was introduced as a new major at only two universities in Iran. At the age of 18, I went to the city of Shiraz to study for my BSc. I had to take an overnight bus for 16 hours, manage my own accommodation and my own budget, and build an independent life far away from Tehran, my hometown, and family.

Later, I moved to Australia and started building a new chapter of my life. I became familiar with different cultures, lived in two different cities, made new friends, visited beautiful places, and learned a lot of science. After 11 years of making my home in Australia, I accepted the challenge of moving to the US and of opening another chapter in my career.

Although I arrived in the US right in the middle of the pandemic, I was pleasantly surprised by the warmth of the people I met and the smooth transition into the local community. The privilege of having access to the latest technologies, state-of-the-art facilities, and an environment full of brilliant scientists who are working towards a better future for patients is something I am grateful for.

What advice do you have for scientists moving abroad?

If you have a dream, don’t be scared to follow it. Although a new start may seem challenging, it provides opportunities to learn and gain new experiences, meet new people, build new collaborations, and grow as an individual and a scientist. If you have a vision, never stop chasing it.