#WhyIScience Q&A: An aspiring physician-scientist investigates health through the eye

Maryam Zekavat, MD/PhD student and Broad researcher
By Nora Bradford
An MD/PhD student discusses what drew her to combining computational biology with ophthalmology and cardiovascular medicine, and her work inspiring high school girls in science and engineering.

During an undergraduate summer research program in Switzerland, Maryam Zekavat became fascinated with a crucial, yet often overlooked part of the body — the eye. After researching eye diseases and observing ophthalmology in the clinic, she knew she wanted to learn more about the eye’s connections to the brain, the vasculature, and the rest of the body.

When she returned to Boston, Zekavat worked at the Broad Institute of MIT and Harvard as a computational biologist for two years, applying computational methods to sequencing data to understand the genetic basis of atherosclerotic cardiovascular disease. She then began an MD/PhD program at Yale University while continuing to work in Pradeep Natarajan’s lab at Broad and Massachusetts General Hospital. With interests in both cardiology and ophthalmology, Zekavat set out to combine the two fields through a project investigating retinal vascular disorders. Using a large database of roughly 100,000 retinal images from the UK Biobank, she uncovered new links between the microvasculature and systemic disease, and between inherited genetic factors and microvascular geometry.

Zekavat will soon begin her residency in ophthalmology at Harvard Medical School, where she hopes to build on her research at Yale and Broad. In this #WhyIScience Q&A, she spoke with us about what the eye can tell us about the rest of the body and her work mentoring high school students in STEM.

How did you become interested in science?
My mom did her PhD in math and my dad in electrical engineering. Being brought up in a family where both of my parents were in academia and in math and science really helped spark my interest in science. Then, during undergrad at MIT, my interest in combining math and biology through computational biology grew through research. So I would say it really started early on and then kept growing exponentially.

How did your studies at MIT influence your career path?
I majored in biological engineering at MIT, which is this super diverse combination of computer science, physics, and engineering, with biological systems. Through the MISTI program at MIT (the MIT International Science and Technology Initiative), I traveled to Switzerland for three months during the summer after my junior year. There, I worked at Roche on a project developing a mathematical model of cholesterol dynamics in the outer retina to understand the build-up of deposits in the eye called drusen in age-related macular degeneration, or AMD. AMD is one of the blinding eye diseases that occur in older folks and the “dry” form of it is currently untreatable. So we were trying to mathematically model the processes that lead to cholesterol buildup in drusen deposits in the outer retina, which are pathological drivers of AMD.

It was just a fantastic project for me in the sense that, one, it was international; two, it was with pharma, which was a new arena of research that I had not taken part in before; and three, I was able to also gain experiences clinically and surgically in ophthalmology. I was able to join the Basel eye clinic and see patients with a variety of different eye conditions and also observe surgeries in the OR Overall, the experience not only combined my interest in biology and math, but also brought in another level, which was patient care and clinical and surgical components of medicine.

Could you tell us about your most recent research at the Broad?
All throughout med school I was exploring different options for specialties with a huge interest in cardiology in the back of my mind. The ophthalmology experience I had at MIT also stuck with me and so I kept an open mind. I did an ophthalmology elective early last year during medical school and really fell in love with ophthalmology. I loved that it’s  a very visual field – you're able to directly visualize pathology in the retina. It’s a field with both clinical and surgical components, with the ability to make a concrete impact on patient lives by improving vision. It’s also the field with the first ever genome-wide association study, for AMD, the first FDA-approved gene therapy, and the first applications of machine learning on medical imaging data through retinal fundus imaging. And it's a field with connections system-wide, including connections with the cardiovascular system.

Given that my PhD co-advisor, Pradeep Natarajan, is a cardiologist, I was trying to envision a project that touches both the fields of ophthalmology and cardiology. I decided to look at retinal microvasculature, because microvasculature is a very difficult organ to study. But a great way to visualize the microvasculature non-invasively in the body is through the retina.

What did you find?
After analyzing retinal images and genetic information from the UK Biobank, we were able to discover about 20 different loci associated with retinal vascular density and microvascular branching complexity. These genes are involved in pathways related to angiogenesis and inflammation, with targets that  are actually being tested in clinical trials as we speak. 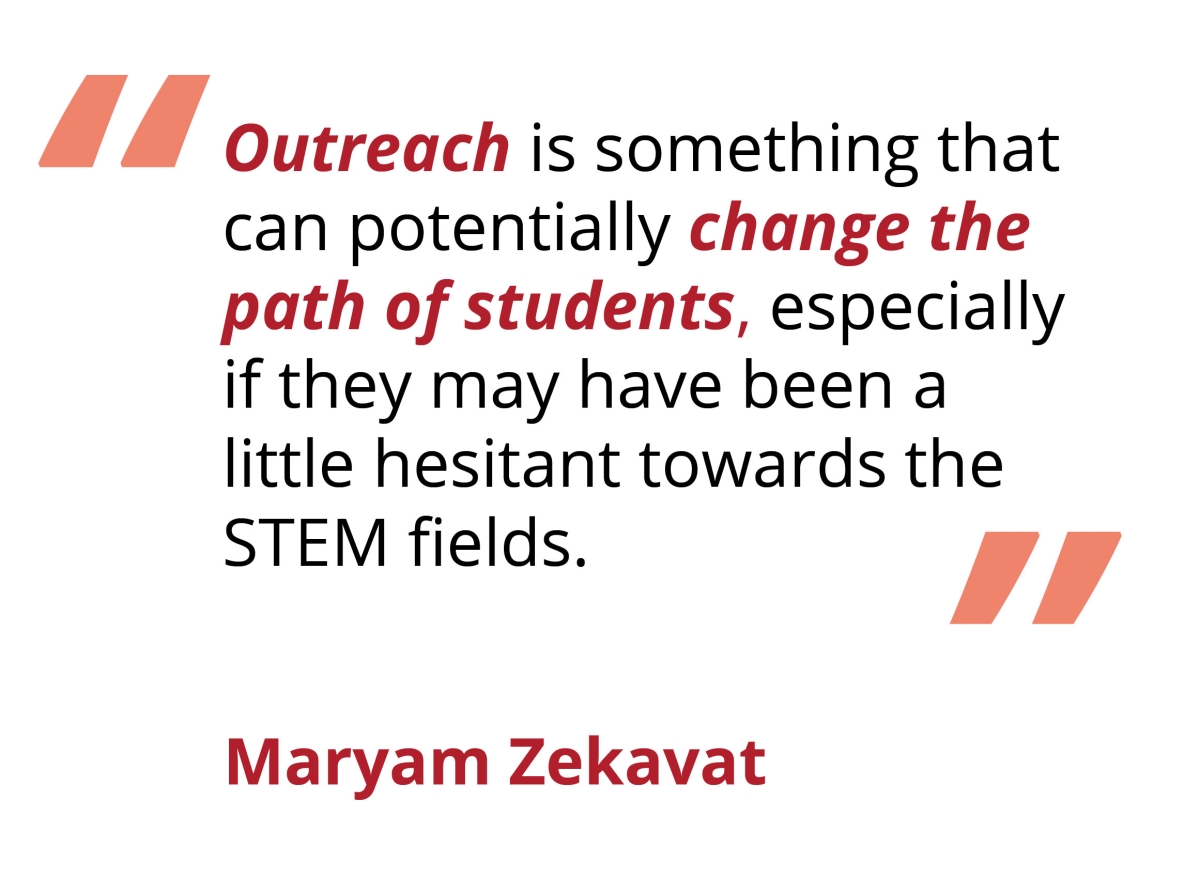 How did you get involved with outreach with high school students?
I was involved with it for almost four years as an undergrad at MIT through this group called WiSE, or Women in Science and Engineering. It's an outreach program for high school girls run through the Society for Women Engineers, and I co-led it with a couple other students during my time at MIT. We held monthly sessions with a group of about 20 to 30 high school students from mostly underserved communities in the greater Boston area, who stayed for an entire academic year. We would do activities in different fields of science and engineering and show them around different labs at MIT and do science experiments. For one session, we even brought in an EKG machine and taught the high schoolers the connection between electrical engineering and the cardiovascular system by seeing how you can actually understand cardiac health by using this machine that detects electrical currents in the heart.

We really wanted to highlight the idea that engineering is applicable to society in so many ways, through health, aerospace, materials science, and so many other fields. I think it's something that can potentially change the path of students, especially if they may have been a little hesitant towards the STEM fields.

What advice would you give to someone thinking about doing an MD/PhD?
Really think about how you envision your future and how you envision combining research and clinical work. It’s definitely a worthwhile pursuit if you want to build your research knowledge and skill sets. There are pros and cons to doing an MD/PhD and one of the cons can be time. While each MD/PhD timeline is a little different, the PhD portion can potentially take a long time, and you can certainly do impactful research as an MD without a PhD.