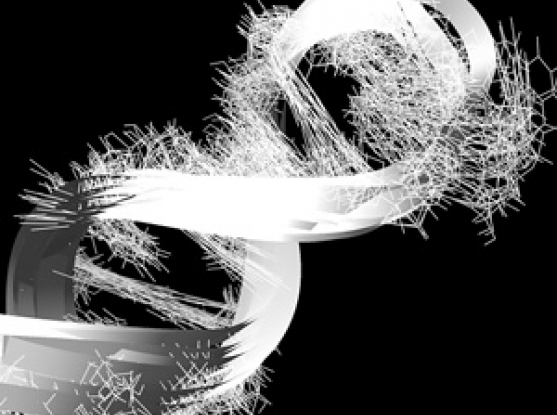 By Leah Eisenstadt
The central dogma of molecular biology states that DNA makes RNA, which makes protein, the functional players in the cell. But like most rules, this one has some exceptions. A small part of the genome, roughly five percent, is thought to be functional – it is conserved across species meaning that...

The central dogma of molecular biology states that DNA makes RNA, which makes protein, the functional players in the cell. But like most rules, this one has some exceptions.

A small part of the genome, roughly five percent, is thought to be functional – it is conserved across species meaning that evolution has held onto it because it plays an important role for the cell or the organism. But an even smaller part, only one-fifth of that five percent, actually codes for proteins. The rest of that functional, but “noncoding,” part of the genome is still quite mysterious to researchers.

Scientists at the Broad are making headway into this unexplored area of the genome, discovering new roles for some of this noncoding DNA. In fact, some of the DNA is converted to RNA molecules that are more than mere messengers on the path to proteins, but function as RNA molecules. Scientists suspect that they play regulatory roles in the genome, but much more work remains to reveal their true roles in the cell.

“RNA is one of those undervalued components and the major reason is that we were simply missing the resources needed to study them,” says Mitchell Guttman, a graduate student at MIT and the Broad Institute who studies functional RNA molecules. “RNA has been short-changed in the post-genomic era…Some might argue that proteins are the powerful molecule and all RNA is doing is putting it together, but I think that’s a pretty powerful thing.”

Working with researchers from across the Broad, Mitch investigated the role of more than 100 of these non-coding RNAs found in embryonic stem cells. He and his colleagues have now published work showing that these molecules, known as large, intergenic non-coding RNAs (lincRNAs), play an important role in embryonic development (read the press release here). The researchers used new tools developed by the Broad’s RNA interference (RNAi) Platform to selectively target those lincRNAs and reveal clues to their functions.

Platform director David Root explains why RNA interference is a good tool for uncovering the role of functional RNAs. The technique uses double stranded RNA molecules known as short hairpins (shRNAs) to turn down gene expression at the transcript level by “knocking down” the RNA made from the genome. Scientists can use the method to investigate the function of genes by systematically turning them off, one by one. The RNAi Platform currently has more than 320,000 shRNAs targeting nearly all the protein-coding genes in the human and mouse genomes. “RNA interference manipulates cells at level of the RNA produced by their genes,” David says. “That works very nicely not only to study protein-coding genes but also non-coding genes because we are suppressing the transcripts that represent a common currency of both coding and noncoding genes.”

When Mitch and his colleagues needed a way to investigate the role of lincRNAs, they wanted to use RNA interference, but the platform’s library lacked shRNAs targeting noncoding genes. “The lincRNAs were, for us, the latest new category of genes that we weren’t yet targeting,” David says. “We knew non-coding genes were out there, but we didn’t have traction to tackle them because they weren’t well-defined.”

So the researchers set out to build a new resource of shRNAs targeting noncoding genes, but they faced several challenges along the way. “We had to break the mold of our coding-gene targeting in a few ways,” David says. An initial concern was whether lincRNAs were even accessible in the cell to their tools – RNA interference takes place in the cytoplasm, but lincRNAs spend most of their time in the nucleus. Others had reported success knocking down non-coding genes, but there were very few cases and they used different shRNAs than the Broad team.

The team also had to adapt some of their processes to noncoding genes. David explains that a lot of the infrastructure for designing and producing shRNAs had been built taking advantage of public genomic databases and informatics resources for coding genes. “We had to rebuild some of that process to incorporate the newly required flexibility, and we wanted to do it in a smart way for this and future projects.” David and his team worked closely with Mitch, first author of the new study, to adapt their processes.

With a small library of RNAi reagents, the team was able to knock down more than 100 lincRNAs and uncover previously unknown roles for these molecules in embryonic development. Mitch says the goal of this effort was not to build a comprehensive library targeting all lincRNAs, but to investigate the feasibility of knocking them down systematically for their functional characterization. “The goal was really to set up a pilot and test it in a systematic way, to pave the way for much larger scale endeavors.”

Indeed, David and his colleagues are working to build their shRNA library to target many-fold more lincRNAs, both in the human and mouse genome, in addition to targeting other noncoding RNA molecules like microRNAs – an effort he says “will keep us busy for a while, making use of the latest information to do this in a smart way.”

The researchers hope these new tools will help reveal secrets of these mysterious non-coding genes. David says, “The more we learn, the more we see of the full complexity of the functional interaction of the entire genome. We resolve some questions, but we also discover new questions we should be asking.” He adds that this effort is part of the “gigantic project of the 21st century” to understand gene function at a whole-systems level. “Non-coding genes are a big part of that story, and now we have some of the tools needed to tackle their function systematically.”