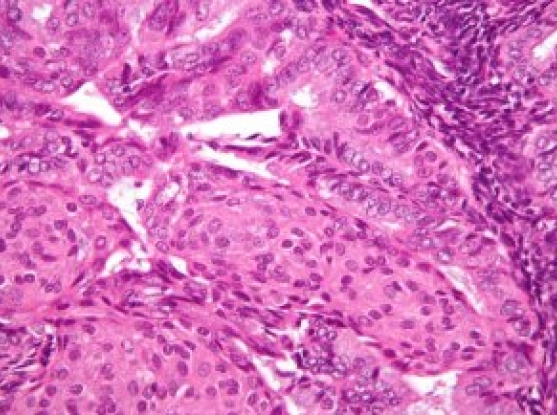 A tumor’s ability to spread to other parts of the body is among its deadliest capabilities. Unfortunately, it is also one of the most poorly understood. By unlocking the biology of this process, known as metastasis, scientists hope to open up new therapeutic avenues for a variety of cancers that, once metastasized, are largely incurable.

A new study published in the June 27 advance online issue of Nature Genetics, takes an important step toward this goal by exploring how metastasis unfolds on a genomic level in endometrial cancer, the most common malignancy of the female reproductive system in the industrialized world.

“The vast majority of deaths associated with endometrial cancer are due to metastatic disease,” says co-senior author Rameen Beroukhim, who is an assistant professor at Dana-Farber Cancer Institute and Harvard Medical School, and a Broad Institute associate member. “Our study represents one of the most comprehensive views to date of any form of metastatic cancer. It begins to define some of the basic principles of metastasis in endometrial cancer that hopefully will also apply to other cancer types.”

In many ways, the world of metastatic cancer biology is in its infancy. Not much is known about what enables a tumor to spread — what genes and gene mutations drive that process, for example. A big part of this knowledge gap is due to the challenges of obtaining samples from patients with metastatic disease. “It is rare that we can get our hands on the metastases,” says Beroukhim. “Once an endometrial tumor spreads, the thinking is that women will not benefit from additional surgeries, and should instead be treated with medicines that reach the whole body.” That means metastases are generally not removed, precluding their study in the laboratory.

But thanks to the diligence of a close collaborator, Helga Salvesen of the University of Bergen and Haukeland University Hospital in Norway, researchers were able to access this precious material. Salvesen, who passed away earlier this year, collected biopsies from women with endometrial cancer who underwent surgery, typically to remove their primary tumors. In some cases, it became clear during surgery that the original tumor had spread unexpected within the abdomen, and the surgeon was able to remove those metastases. Using this approach, Salvesen, Beroukhim, and their colleagues, including first author Will Gibson and co-senior author Scott Carter, were able to assemble a unique collection of 98 samples from 52 patients, including pre-cancerous tissue, primary tumors, and metastases.

The researchers scoured the genomes of these samples (using whole-exome sequencing as well as microarrays) to detect important genetic changes. These include alterations in DNA sequence — so-called somatic mutations — and in copy number, which result in a gain or loss of gene copies relative to the normal number of copies, typically two.

The team found that the overall number of mutations in the primary tumors and the corresponding metastases is similar, but the genes that are affected appear to be quite different. Roughly half of the specific mutations carried by the primary tumor were represented in the metastases, and vice versa.

“That suggests there’s a lot of heterogeneity that you need to consider,” says Beroukhim. “For example, if you biopsy the primary site and find a mutation that you want to base therapy on, there is a good chance it will not be shared by the metastatic sites.”

The researchers homed in on mutations that tend to emerge early in the disease and are linked with fueling cancer growth, representing the likely drivers of oncogenesis. Their analysis pointed to a handful of key cancer genes, including PIK3CA and PTEN, which function in the PI3 kinase pathway. This pathway is the focus of intense interest therapeutically. Several inhibitors are now in clinical development for use in various cancers.

By comparing different metastases from the same patient, the researchers were able to uncover some intriguing findings that shed light on the relationship between metastases and the primary tumor. They found that the various metastatic samples shared nearly all of the same mutations, underscoring their high-degree of relatedness to each other. That suggests the metastases arose from the same part of the primary tumor, like twigs sprouting from the same branch of a tree. It also suggests that if clinicians biopsy just one metastatic site, they will gather biological information that is likely to apply to other secondary sites, too.

Unfortunately, Beroukhim and his colleagues did not identify any mutations specifically linked with metastasis. That could be due to study design — for example, more samples might be required — or it could mean that metastasis is driven by non-genetic events, such as epigenetic changes or environmental stimuli.

But an important, if unexpected, outcome of the current study is that it enabled an even deeper view of what happens within the genomes of primary endometrial tumors. By combining their data with previous studies, including work by The Cancer Genome Atlas (TCGA) as well research led by Levi Garraway’s group at DFCI and Broad, the researchers were able to more accurately discern an entire class of mutations that had been largely overlooked in previous studies. Those mutations, known as insertion-deletions (or indels, for short) are common in cancers, such as endometrial and colon cancer, which struggle to maintain the integrity of particular regions of their genome. From this enhanced picture, Beroukhim’s team identified NRIP1, a cofactor of the estrogen receptor, as a frequently mutated gene. Mutations in this gene are found in 12 percent of endometrial cancers.

Indeed, more work is needed to fully characterize endometrial tumors as they emerge and spread through the body. Beroukhim says that having better strategies for sampling late-stage disease are needed to enable those studies. That includes the isolation of more metastases through biopsies or surgery, if clinically appropriate; technologies for sampling tumor DNA via blood or urine; and, although sobering to imagine, the use of autopsy in patients who have succumbed to metastatic disease.

“If we want to develop new therapies that are aimed at killing cancer cells at metastatic sites, we must learn how those metastases are generated and how they are maintained,” he says.

To honor the late Dr. Salvesen and her legacy of passionate commitment to translational research and patient care, the Helga Salvesen Memorial Symposium on Endometrial Cancer will be held on October 24, 2016 at the Broad Institute in Cambridge, MA. Please contact salvesenmemorial@broadinstitute.org for more information.

Opinionome: What will be the next big –ome?
Reading vivax malaria’s global story in its genes