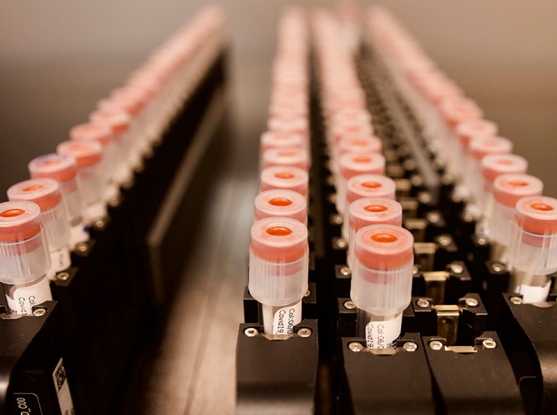 Credit : Scott Sassone
Thousands of samples are processed each day at Broad's COVID-19 testing facility.
By Niall Lennon and Roby Bhattacharyya, on behalf of the project team
Individuals with and without symptoms at the time of testing have similar viral loads, suggesting significant risk of transmission regardless of current symptom status.

[Editor's note, July 20, 2021: This post has been updated to reflect the publication of these findings in the Journal of Infectious Disease.]

Between April 9th and June 9th, 2020, the Broad Institute’s COVID-19 diagnostic laboratory worked in partnership with the Massachusetts Department of Public Health to test 32,480 residents and staff from 366 skilled nursing facilities, nursing homes, and assisted living facilities across the state, regardless of whether these individuals showed any symptoms.

In addition to forming a critical part of the state’s effort to combat the spread of disease among vulnerable populations, this effort generated a large dataset worth exploring — nearly 33,000 tests, all processed at a single lab using the same standards, connected to data about the presence of symptoms and demographics.

We have shared our findings in a paper published in the Journal of Infectious Disease^. We see two key takeaways:

First, surveillance testing (regular testing of asymptomatic people) can effectively detect potential outbreaks among individuals without symptoms, especially in vulnerable populations. Even among nursing home residents at high risk of severe disease, we found that the majority of patients harboring SARS-CoV-2 had no symptoms at the time they tested positive. This underscores the importance of active surveillance and the limitations of symptom-based screening alone.

Second, the viral load distributions among those with and without symptoms at the time of testing are similar. This raises the possibility that the risk of transmission may also be similar, regardless of symptoms — underscoring the importance of regular surveillance tests, especially for at-risk populations. (Important note: Although this study looked at viral load, we did not directly study how infectious any of these individuals are, nor did we distinguish viable from non-viable virus.)

In the nursing homes we tested, approximately 12 percent of residents and nearly four percent of staff showed no symptoms but nevertheless tested positive. Without surveillance testing, they might have continued to move normally among these vulnerable groups — even though their viral loads were the same as the patients and staff who reported symptoms.

At the Broad Institute Clinical Research Sequencing Platform, we extract RNA from nasopharyngeal swabs and look for the presence of SARS-CoV-2 using reverse-transcriptase polymerase chain reaction (rRT-PCR). Our high-throughput facility runs 24 hours a day and typically can return results to the ordering physician within 24 hours.

For this study, we performed a retrospective analysis comparing nasopharyngeal viral loads (as measured by RT-PCR cycle threshold (Ct) levels) in residents and staff with or without symptoms. We examined viral load, as indicated by Ct values, in different cohorts and by reported symptomatology.

For each person tested, the facility reported symptoms at the time samples were collected, as well as basic demographic information to facilitate reporting to the MA Department of Public Health. For people who reported symptoms, we do not know exactly what the symptoms were, only that they were symptomatic.

We also found that viral loads among infected people varied by as much as 250 million-fold, but the distribution of viral load was similar between the populations with and without symptoms at the time of testing. Because we tested so many people, we were able to find statistically significant differences in some comparisons. But in all of the sub-categories of people examined (age, race, ethnicity, gender, resident/staff), there was no substantial difference in viral load distributions between people with symptoms and those without.

These are just a few of the findings; for more, read the preprint.

What is the significance of these findings?

Our findings suggest that tests that have been validated to detect SARS-CoV-2 in symptomatic people are also effective in detecting the virus in people without symptoms. It’s essential that the public health community be well-positioned to detect and contain future outbreaks as early as possible to minimize the spread of COVID-19. To do this, we’ll need to regularly test many people, ideally everyone, including those without any symptoms.

Demonstrating that diagnostic tests are effective in asymptomatic people is essential for effective population surveillance and public health efforts to slow the transmission of the virus.

What are the study’s limitations?

This is not a longitudinal study, meaning that we did not follow the individuals over time. We do not know whether people who were asymptomatic when they tested positive later developed symptoms, never got symptoms, or had symptoms and then recovered before getting the test. While these distinctions have important implications for contact tracing, any patient who sheds virus without concurrent symptoms is at risk for unwitting transmission to others and is thus important to identify if possible.

^Our findings were initially released in a preprint in 2020.

Introduction and spread of SARS-CoV-2 in the greater Boston area
#WhyIScience Q&A: How I code to make a difference