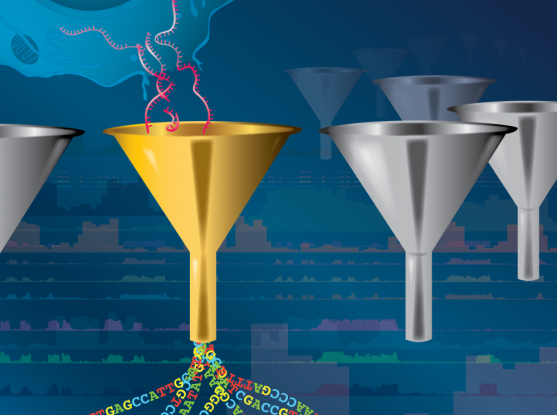 By Leah Eisenstadt
Broad scientists publish hundreds of research papers every year. Some of those papers are among the most noteworthy in that journal issue, and may even be chosen as the issue’s “cover story” with accompanying artwork on the journal’s cover — an honor for scientists and artists alike. The process of...

Broad scientists publish hundreds of research papers every year. Some of those papers are among the most noteworthy in that journal issue, and may even be chosen as the issue’s “cover story” with accompanying artwork on the journal’s cover — an honor for scientists and artists alike.

The process of conceiving and producing artwork to illustrate scientific research can be a lengthy, resource-intensive venture, but it is well worth the effort. Some of these images make it into journals, while others become educational, eye-catching graphics that the scientists themselves use in presentations or to promote their work. And the process of creating the image itself holds value for all involved.

This image, created by Broad illustrator Susanna Hamilton, an undergraduate intern, and graphics editor Leslie Gaffney, was submitted as a potential cover graphic for the Nature Methods July 2013 issue, accompanying the research paper by Broad scientists Joshua Levin and Aviv Regev, among others, comparing five methods for sequencing RNA from imperfect samples. The graphic depicts RNA pouring out from a broken cell and being funneled into the best-performing method (the golden funnel) to generate high-quality sequence data.

The image was conceived by Levin and fellow Broad scientist Georgia Giannoukos, who originally had the idea of representing various RNA-seq methods with funnels. “I thought, well you have all the RNA and they’re in little pieces,” said Giannoukos. “Maybe you could just have it so it’s funneled in together and you come out with an intact transcript with this process.” Levin took this idea to Hamilton and Gaffney for help. The scientists hoped to get their story on the cover, with RNA sequencing being such a “hot topic” now and lots of potential interest among the scientific community in methods to sequence low quality and/or low quantity samples.

Hamilton and Gaffney collaborated to turn the funnel idea into reality, working hard to get the RNA strands just right, illustrate a natural-looking cell, and emphasize the data pouring out of the golden funnel. They also layered in data graphics from the Integrative Genomics Viewer — an interactive visualization tool created at the Broad for exploring large genomic datasets — to give the image depth.

Cover submissions can be challenging, Hamilton explains. “You’re creating an abstract image that has to represent a real concept, and get that across to the reader. It has to be beautiful and eye-catching, which is tough.”

Gaffney adds, “There’s a lot that goes into cover design. In addition to the creative process, we consider what strikes the right balance of the appropriate metaphor, speaks to the reader, helps the reader understand the concept, and is attractive for the cover.” They also must be aware of what editors are likely to want, taking clues from past issues to learn whether a journal tends to run custom illustrations or stock photos.

Hamilton and Gaffney proudly submitted their final image to the journal for consideration for the cover. In the end, the editors chose another image for this cover, but featured the funnel image in the table of contents.

Even when images aren’t selected for the cover, the process of creating them can be fun and the resulting images can still be useful to the scientists. Levin and Giannoukos agree that working with artists is valuable to them.

Levin explained that the challenge of distilling a paper down to one image is an important task for a scientist. “You have to ask yourself, ‘What’s the essence of the paper? What did you really do?’ Sometimes you write the paper and have all these figures and conclusions, but this tells you what it boils down to.”

Giannoukos added, “Maybe it is a good thing to have more scientists challenge themselves to come up with image ideas. It will make them better researchers to look at things from different angles.”

Sneak preview of “The coelacanth, its evolution, and how fish first came onto land”
Algorithm seeks meaningful relationships