Stifling a statin side effect 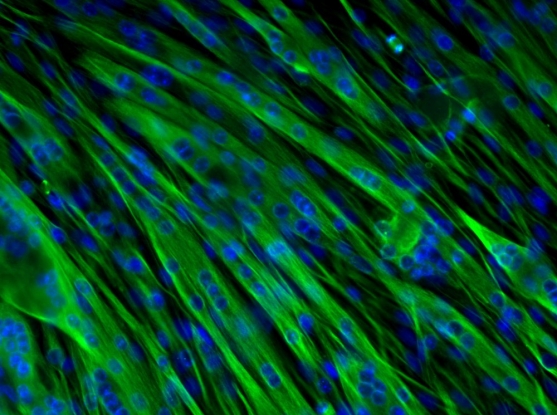 Myotubes
By Haley Bridger
In the tiny, pinhead-sized wells of a microplate, cultured muscle cells begin to twitch. These mouse cells can grow into long, hearty strands in culture. But when these tendril-like cells are exposed to statins – a drug taken by millions of people to lower cholesterol levels –they start to wither...

In the tiny, pinhead-sized wells of a microplate, cultured muscle cells begin to twitch. These mouse cells can grow into long, hearty strands in culture. But when these tendril-like cells are exposed to statins – a drug taken by millions of people to lower cholesterol levels –they start to wither away, mirroring what may be happening in the muscles of some patients.

Broad Institute researchers made this observation by chance about five years ago. Bridget Wagner, a leader of the Chemical Biology Program at the Broad with an interest in diabetes, and Vamsi Mootha, a Broad associate member who studies mitochondrial diseases, had teamed up to look at mitochondria – the cell’s tiny power plants – in these muscle cells. They treated these cells with thousands of chemical compounds, including some approved medications, and then watched for changes that might reveal more about the biology of these tiny organelles.

Three of the statin molecules that they tested had a clear, damaging effect on muscle cells. Within two days, the researchers saw the levels of ATP (packets of stored energy generated by mitochondria) drop by 50 percent. “That’s a kind of read-out in the muscle cells of their general health or sickliness,” explains Bridget. Muscle toxicity, or myopathy, is one of the most common side effects of statins. It can range from mild aching to deadly muscle breakdown and can limit the amount of the drug that a patient can take. The researchers thought that perhaps they could use these muscle cells treated with statins to better understand the cause of this side effect and look for a compound that could reverse or suppress it.

But before Bridget and her colleagues began testing compounds, they wanted to better understand techniques for studying myopathy and statins – a drug outside of Bridget and Vamsi’s respective areas of expertise. “We dug through the literature for guidance,” says Bridget. They found useful papers on how to culture cells, but also reached out to scientists like Vikas Sukhatme, who has studied the phenomenon of muscle toxicity in zebrafish.

The researchers then tested a modest set of compounds – about 3,000 – looking for molecules that could maintain ATP at normal levels. They succeeded in finding a compound that could suppress the statin-induced ATP drop off – it even worked in the zebrafish model – but this particular compound is not suitable for human use. However, its discovery confirms that the researchers’ approach can pinpoint promising compounds. Now, Bridget, Vamsi, and their colleagues want to expand their search from 3,000 molecules to 300,000 molecules, a project they can do through the Broad’s state-of-the-art chemical screening facility. This facility offers researchers free access to compounds and support for follow-up biology and chemistry optimization, through an NIH-funded network known as MLPCN.

“One of the nice things here is that we’re able to spin this project out into a larger-scale screen for MLPCN,” says Bridget. “We’re growing the same cells…and then screening 300,000 compounds for the same ability to suppress toxicity.” Other compounds with the ability to suppress the decrease in ATP in cells might serve as valuable tools in the study of mitochondria or pave the way for the development of innovative treatments for statin-induced myopathy.

ACS Chemical Biology recently interviewed Bridget about this exciting work for their podcast. You can listen to the podcast here (please click on the September 2011 issue). You can find the team’s journal article on their most recent findings here.

Other Broad researchers who contributed to this work include Tamara Gilbert, Nicole Bodycombe, and Paul Clemons.