From spectrum to continuum 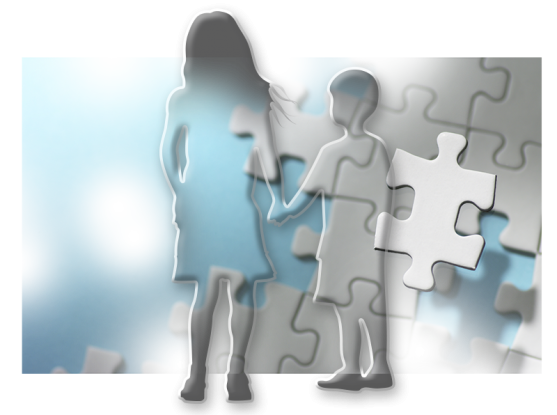 Autism spectrum disorders (ASD) are a class of neurodevelopmental conditions characterized by social interaction difficulties, communication and language challenges, and repetitive behaviors. While these traits are central to the diagnosis of these disorders, there is no objective “cut-off” that marks the point at which these traits—which are also found to varying degrees in populations not considered to have ASD—are clinically significant. This ambiguity muddies the diagnostic waters. It also reflects the uncertain biology underlying ASD.

With advances in genome sequencing and analysis in recent years, there has been hope that genetics might shed light on the biological roots of ASD—and, indeed, a picture of ASD’s genetic landscape has started to take shape. But, it’s complicated: research has shown that most ASD risk is polygenic (stemming from the combined effects of many thousands of genetic differences with small effect, distributed across the genome). Some cases are also associated with rare genetic variants of large effect, which are usually de novo (not seen in an individual’s parents)

Complicating the picture still further, virtually all genetic risk factors for ASD can be found in individuals who have not been diagnosed with ASD or other neurodevelopmental disorders. Taken alongside the long-noted observation by researchers, clinicians, and others in the ASD community that the social and behavioral traits, or “phenotypes,” identified with ASD are often seen at lower levels in family members of those diagnosed with the disorder, this ambiguity has raised an intriguing question: might there be a genetic relationship between ASDs and the expression of ASD-related traits in the general population?

Thanks to the increasing availability of genetic data on autism cases and healthy controls, researchers from the Stanley Center for Psychiatric Research at Broad Institute, Massachusetts General Hospital (MGH), the University of Bristol, UK, and a large group of international collaborators, were able to investigate this phenomenon. Their findings were published online this week in Nature Genetics.

The researchers used data from genetic studies on both inherited and de novo influences on ASD risk—both in ASD cases as well as controls—for which both genetic and social/behavioral information had been collected. The social/behavioral and genetic data used included measurements of social and communication impairment in a control group from the general population (the Avon Longitudinal Study of Parents and Children) and in nuclear families that included ASD cases and unaffected siblings (the Simons Simplex Collection (SSC) cohort). The genetic influences on risk for ASDs were estimated in several large, international autism genetic studies: the Psychiatric Genomics Consortium Autism group, the iPSYCH autism project in Denmark, the SSC, and the Autism Sequencing Consortium.

For both inherited and de novo ASD risk factors, the team found strong links between genetic influences on ASD and social/behavioral trait differences in the general population. These findings suggest that the genetic risk underlying ASD influences a continuum of behavioral and developmental traits across the population, with those diagnosed with ASD representing a severe presentation of those traits. The findings also support the observation that some family members of people with ASDs are more likely to manifest social and communication traits that are closer to those associated with ASD since family members carry, on average, an increased genetic risk for ASD. This tendency is similar to that observed in the familiality of height: extremely tall individuals often have family members of above average height themselves.

“There has been a lot of strong but indirect evidence that had suggested these findings. Once we had measurable genetic signals in hand—both polygenic risk and specific de novo mutations known to contribute to ASD—we were able to make an incontrovertible case that the genetic risk contributing to autism is genetic risk that exists in all of us and influences our behavior and social communication,” says Mark Daly, co-director of the Broad Institute’s Medical and Population Genetics (MPG) Program, a Stanley Center researcher, and senior author of the study.

Verifying the existence of this continuum in social and behavioral traits across the population—and examining the nuances of the genetic ties to variation in these traits across ASD and mainstream populations—may help researchers clear up the incredibly complex genetic picture underlying autism biology. For instance, the researchers found that the inherited genetic influences on ASD risk correlated positively with IQ in the general population, while the de novo influences on ASD risk are strongly associated with low IQ and intellectual disability. These findings suggest that genetic risk types operate differently and provide insight into the heterogeneity of presentations of the conditions currently labeled as ‘autism’.

“This paper establishes that we can use behavioral and cognitive data in the general population to untangle the mechanisms through which different types of genetic risk are operating,” says study co-first author Elise Robinson, an MGH scientist associated with the Broad’s Stanley Center and MPG Program. “We now have a better path forward in terms of expecting what types of disorders and traits are going to be associated with certain types of genetic risk.”

The paper also confirms the effectiveness of a new approach that could help researchers achieve a long-standing goal of genetic research into autism: understanding how the many presentations of ASD differ.

“Our study shows that this method of collecting and using phenotypic and genetic data in typically developing children can be useful in terms of the design and interpretation of studies targeting complex neurodevelopmental and psychiatric disorders. Based on the genetic link between population-based social-communication difficulties and clinical ASD, we may now gain further phenotypic insight into a defined set of genetically-influenced ASD symptoms. This may help us to identify and investigate biological processes in typically developing children that are disturbed in children with ASD,” explains Beate St. Pourcain, co-first author and researcher at the University of Bristol and the Max Planck Institute for Psycholinguistics.

Daly, who is also chief of the Analytic and Translational Unit at MGH and associate professor of medicine at Harvard Medical School, says of the team’s approach: “The trajectory of this research is providing a much better understanding of the heterogeneity of autism. This line of research is one of the most convincing steps in that direction we’ve seen.”

The long-term hope for the research is that it may provide new insights into how people who exhibit various ASD-associated traits should be diagnosed and treated. It could also help identify subpopulations of psychiatric disease patients who might benefit from different approaches to therapy.

The researchers expect the approach to be used in the future to explore the associations between genetic risk and behavioral traits in other neuropsychiatric disorders such as schizophrenia as well.