The skinny on fat cells 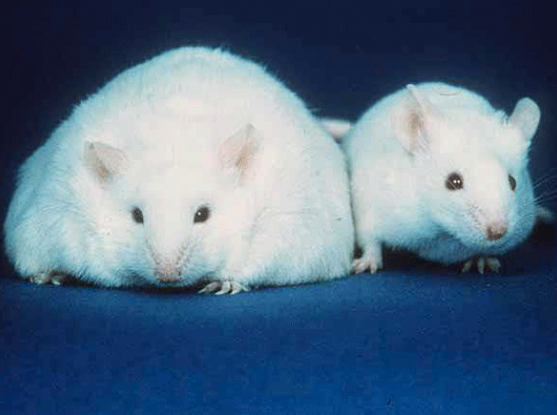 By Haley Bridger
Researchers at the Broad are looking for clues about how fat cells develop. Last week, we posted a news story about research published in the journal Cell that shows how scientists are using epigenomic maps to find factors that control fat cell development. Scientists have been studying fat cells...

Researchers at the Broad are looking for clues about how fat cells develop. Last week, we posted a news story about research published in the journal Cell that shows how scientists are using epigenomic maps to find factors that control fat cell development.

Scientists have been studying fat cells intensely for decades in the hope of shedding light on widespread diseases like type 2 diabetes and obesity. These diseases are rampant in the United States (you can find more information about these trends on the CDC web site). Below are some interesting facts about research in this field:

Genes play a major role in weight gain. Twenty years ago, scientists conducted a study to find out how large a role our genes play in determining our body mass index (a measure based on weight and height). They looked at identical and fraternal twins raised together and apart, and found that genes accounted for up to 70 percent of variability in body mass index. This makes body mass index one of the most strongly inherited conditions.

Mouse models. Scientists at the Jackson Laboratory use mice to study human diseases, and those who take care of the mice are always on the lookout for unusual phenotypes, or physical characteristics. They’ve found strains that appear to be obese because of single gene mutations, including Ay (yellow agouti), obese (ob), diabetes (db), fat, and tubby. The ob/ob mouse is pictured here.

Leptin: the hungry gene? Researchers found the ob/ob mouse in 1950. In addition to being obese, these mice are resistant to insulin and are always hungry. In 1994, scientists discovered that the mutated ob gene was responsible for producing a hormone called leptin (the name is derived from the Greek word for thin). They hypothesized that leptin delivers the message, “I’m full,” to the brain — without it, the mice were never satiated. When these mice were given leptin supplements, they began losing weight.

No magic cure. Leptin received a lot of press and thousands of scientific papers have been published about it. Some had hoped that giving leptin to obese humans would have the same effect, but clinical trials didn’t bear this out. However, leptin has helped treat rare diseases such as lipodystrophy, a disease in which fat cells atrophy and disappear.

A new source for study: cells from liposuction. Mice have been used to study fat cell development since the 1970s, but a new technique now allows scientists to use human cells for study. Where do these cells come from? Adipose tissue samples leftover from liposuction. Liposuction is one of the most common cosmetic procedures in the United States — over 250,000 operations were performed last year.

Cold War and fat cell research. In 2008, researchers at the Karolinska Institute came up with a clever way to measure the turnover of fat cells. They looked at levels of carbon-14 — a version of carbon containing eight neutrons that was released into the atmosphere during nuclear bomb tests conducted during the Cold War (1955 to 1963). Carbon-14 combines with oxygen to create carbon dioxide, which is incorporated into plants and therefore into our food, and then into our cells. Carbon-14 is a sort of time-and-date stamp in our fat cells, indicating when they were created in relation to the Cold War.

The number of fat cells in your body stays constant during adulthood. This number is set during childhood and adolescence, and remains stable during the rest of your life. The volume of individual fat cells can expand, increasing a person’s fat mass, even though the number of cells stays the same.

Fat cells turn over at a steady rate of about 10 percent each year. New fat cells replace older ones in adults of all ages and body weights.