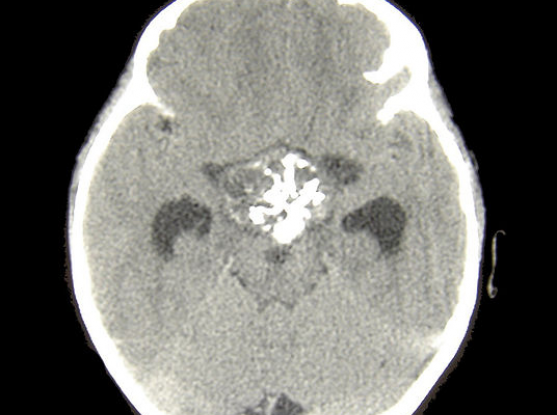 By Leah Eisenstadt
For patients with a rare brain tumor known as craniopharyngioma, the treatment options are slim — and often hazardous. Although the tumor is usually not aggressive, its location is perilous. Growing at the base of the skull near the pituitary gland, the tumor compresses parts of the brain as it...

For patients with a rare brain tumor known as craniopharyngioma, the treatment options are slim — and often hazardous. Although the tumor is usually not aggressive, its location is perilous. Growing at the base of the skull near the pituitary gland, the tumor compresses parts of the brain as it enlarges, causing vision and learning problems and endocrine dysfunction, as well as morbid obesity. There is currently no drug to shrink the tumor, so the only options are surgical removal and radiation, which can leave patients with serious, lasting problems.

“It’s a striking tumor to us [neuro-oncologists], because even though it’s a simple lesion, it causes dramatic clinical complications because of where it occurs,” said Sandro Santagata, a Broad Institute researcher and neuro-oncologist at Dana-Farber Cancer Institute who helped lead a new effort to unearth the genetic roots of this tumor. “The surgical procedure can lead to a significant amount of morbidity. It’s very tough to remove the tumor in this very delicate spot, so surrounding structures can be damaged.”

Scientists knew that the key to finding a drug treatment for the illness lay within the tumor’s genome, but they had no idea what was awry genetically — until now. After analyzing tumor DNA from dozens of patients with papillary craniopharyngioma, the adult form of the tumor, a research team led by Santagata, Gad Getz, and Mark Kieran and other scientists at the Broad and Dana-Farber has uncovered something rarely seen in cancer — a lone genetic “smoking gun.”

The results are striking: a single mutation in the gene BRAF was found in nearly all tumor cells in nearly all cases studied. No other recurrent mutations were found, pointing to this mutation as the driver, or causal, mutation underlying the tumor. The scenario suggests it is a potent therapeutic target, which is fortuitous since drugs aimed at mutated BRAF are already available in the clinic. If BRAF inhibitors can be shown to successfully kill tumor cells in clinical trials, it might be possible one day to use the drugs to shrink the tumors pre-operatively, making surgical removal easier and safer, or they could help control tumors that cannot be completely removed or that recur after surgery. The craniopharyngioma study appears in print this week in Nature Genetics.

“Before this study, a clinical target had never been identified, but what’s most exciting is now there’s a potential drug target and a potential medical therapy for these tumor types,” said Priscilla Brastianos, a Broad researcher and neuro-oncologist at Dana-Farber, and co-first author of the new study. “This could drastically change how we manage these patients, giving us one more weapon in the treatment arsenal for this rare disease.”

The mutation, known as BRAF (V600E), has been linked to other cancers, such as melanoma and multiple myeloma, but never before has it been so conclusively implicated. Many cancers harbor a constellation of genetic risk factors and cellular subpopulations, but in the case of papillary craniopharyngioma, its simple genetic root was unexpected. “To find this [BRAF mutation] in virtually every tumor was astounding,” said Brastianos.

The abnormally dividing cells in papillary craniopharyngiomas often make up a very small portion of the tumor, sometimes as little as 3 percent of the tumor mass, with the rest composed of fluid, immune cells, stromal cells like fibroblasts, and other debris. Using analysis methods developed by co-first author and Broad researcher Gad Getz and others at the institute, the team was able to overcome this challenge, mining exome and targeted sequencing data to detect the mutation in the relatively small number of tumor cells in each sample, and to show that the mutation was present in nearly all tumor cells.

With Broad-developed analysis techniques, the researchers showed that, unlike in melanoma or multiple myeloma, papillary craniopharyngioma seems to be driven by only the BRAF mutation, which could make it especially vulnerable to FDA-approved BRAF inhibitors. Santagata, Brastianos, and their colleagues plan to begin a clinical trial soon to see whether these drugs can shrink the tumors, perhaps in preparation for surgery. “The real hope is that once we hit this one target, it will lead to a strong, durable response,” said Santagata.

The researchers also studied dozens of samples from patients with adamantinomatous craniopharyngioma, the form that appears primarily in children. Here, too, they found a single recurrent mutation — in CTNNB1, the gene that encodes the beta-catenin protein — in nearly all cells in nearly all cases. Drugs that target the beta-catenin signaling pathway are currently in development, so this could be an important therapeutic strategy one day. For now, the knowledge that this is likely the principal driver mutation in this tumor carries diagnostic importance, enabling physicians to confirm the subtype of a patient’s tumor.

Because BRAF inhibitors are already available, Santagata hopes that the drugs can one day supplement surgery and radiation as a treatment option for patients with such a hard-to-treat illness as papillary craniopharyngioma.

“It’s such a good time to find a mutation like this,” he said. “Maybe it’s not the most biologically interesting mutation we could find, but if I were a patient with this tumor, I really couldn’t ask for a better driver mutation than this one, at this time in history.”

This work relied on the collaborative efforts of clinicians and scientists at the Broad Institute, Brigham and Women’s Hospital, Massachusetts General Hospital, Boston Children’s Hospital, and Dana-Farber Cancer Institute, in addition to contributions from colleagues at Children’s Hospital of Philadelphia and Johns Hopkins University who helped obtain precious samples of these rare tumors. Other Broad scientists involved in the work include co-first author Amaro Taylor-Weiner, Mike Lawrence, Chip Stewart, and Bill Hahn.

Ancestral legacy
Putting a neglected disease in the spotlight