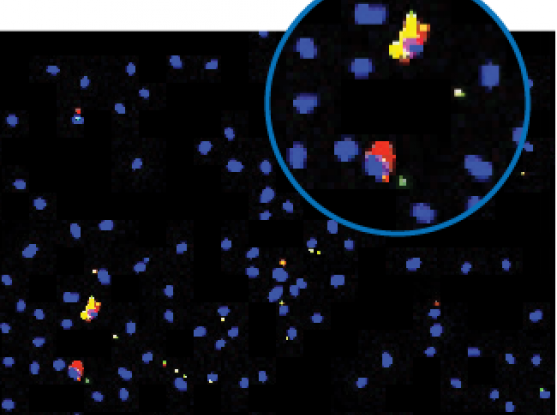 Single-cell analysis
By Veronica Meade-Kelly
What: When bacteria invade the human body, immune cells rush to our defense, initiating a high-stakes tug-of-war in which macrophages – a type of immune cell that engulfs and digests pathogens and cellular debris – attempt to destroy the invaders while the bacteria look to survive and replicate...

What: When bacteria invade the human body, immune cells rush to our defense, initiating a high-stakes tug-of-war in which macrophages – a type of immune cell that engulfs and digests pathogens and cellular debris – attempt to destroy the invaders while the bacteria look to survive and replicate. The outcomes of these cellular death matches vary from cell to cell: some macrophages engulf bacteria while others remain uninfected, and of those infected, some destroy their invaders while others allow bacteria to thrive.

Researchers have been able to observe these diverse outcomes for decades, but there hasn’t been a way to look at what is happening at the molecular level to yield such varied results. Instead, interactions between immune cells and bacteria have traditionally been measured across populations of cells, revealing average cell behavior while potentially masking cell-to-cell variation that may be important for understanding the process of infection.

In a proof-of-concept study published in the September 10 issue of Cell, Broad researchers have brought cutting-edge single-cell analytical approaches to bear on the host-pathogen interactions between immune cells and bacteria to better understand this variability in infection outcomes. The team first infected macrophages with Salmonella, bacteria that have been extensively studied in host-pathogen interaction models. By tagging the Salmonella with fluorescent dyes that allowed them to see whether or not the bacteria survived, the researchers were able to distinguish individual cells based on the outcome (or "infection phenotype") of the host-pathogen encounter. The team then went on to use an approach called flow cytometry to sort the cells based on infection phenotype and then look at gene expression in each of the sorted cells using a method called single cell RNA-seq (sequencing).

It turns out, the team found, that Salmonella populations are not homogeneous, They found that in some of the invading Salmonella, a two-component system senses the intracellular environment of the macrophage and can alter the consistency of a substance called lipopolysaccharides (LPS) on the cell wall. This results in subpopulations of Salmonella that have different cell wall structures, triggering different immune responses from the macrophages. This diversity within the Salmonella population may serve to modulate and manipulate the host immune response, helping the pathogen to establish infection.

Why: “Previously, the variation in infection outcomes was largely ignored because there was no way to look deeply enough into what happens when bacteria and immune cells encounter each other,” explained Roi Avraham, a postdoctoral researcher at the Broad Institute and co-first author of the study. “This paper shows that single-cell approaches can be used successfully to tackle this decades-old problem.”

Understanding the cellular mechanisms that are influencing host-pathogen interactions and therefore driving bacterial infections could lead to new approaches to treatment.

Other researchers who contributed to the work include Douglas Brown, Cristina Penaranda, Humberto Jijon, John Trombetta, Rahul Satija, Alex Shalek, and Ramnik Xavier – who are all affiliated with the Broad Institute.