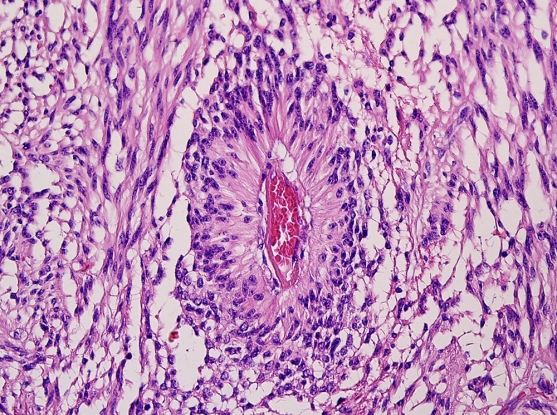 Tumor cells grow around blood vessels
By Nicole Davis
By scouring the genomes of a mysterious, blood vessel-hugging brain tumor in children, researchers unearth a single mutation that helps unlock its biology. Cancer can be a devastating diagnosis at any age, but it is particularly tragic in young children. While many pediatric tumors are now readily...

By scouring the genomes of a mysterious, blood vessel-hugging brain tumor in children, researchers unearth a single mutation that helps unlock its biology.

Cancer can be a devastating diagnosis at any age, but it is particularly tragic in young children. While many pediatric tumors are now readily treated or even cured, for other forms, particularly tumors of the brain, the outcomes are not so rosy.

And yet, somewhat surprisingly, these childhood cancers remain understudied and underfunded relative to their adult counterparts.

This is especially true for a group of cancers known as pediatric low-grade gliomas (PLGG), a heterogeneous collection of slow-growing brain tumors that together represent the most common tumor to plague young brains. While PLGGs as a group are common, individually each subtype represents a rare disease. To put it bluntly, these rare subtypes are a scientific backwater. It is unclear what drives them on a molecular level, and scientists have struggled to learn about them — the cells are so sluggish they cannot be propagated in the laboratory. Moreover, specimens from different tumor types often appear quite similar under the microscope, making it difficult for doctors to deliver a clear diagnosis and determine the best treatment, since some tumors require more aggressive measures than others.

But a new study led by scientists at the Broad Institute, Dana-Farber Cancer Institute (DFCI), and The Children’s Hospital of Philadelphia (CHOP) casts new light on these cancers. The study, which appears in the February 1st advance online issue of Nature Genetics analyzes the cancer genomes of more than 240 PLGGs across all subtypes — the largest such analysis to date — and delves deeply into one specific subtype, called angiocentric glioma. Named for its patterned growth around blood vessels, this form of cancer has only recently been recognized — diagnostic criteria have been in place for less than a decade

Using high-tech tools to characterize the genomes of 19 angiocentric gliomas (included in the sweeping look at more than 240 PLGGs), the researchers made a striking revelation. They found that all of these tumors shared a single mutation — an unusual rearrangement that joins two distant genes, MYB and QKI, into an abnormal gene fusion.

“Another reason this was interesting to us, aside from the MYB-QKI fusion, is that these tumors have very little else going on,” said co-senior author Rameen Beroukhim, who is an assistant professor at DFCI and Harvard Medical School and a Broad Institute associate member. “They have no other mutations that affect the protein-coding regions of the genome, which suggests that [the MYB-QKI fusion] may be the only driver event.”

As a general rule, the genomes of pediatric tumors tend to be far less complex than their adult counterparts. In fact, they are often characterized by one key mutation — a so-called “driver event” that orchestrates the molecular and cellular activities needed to promote tumor growth. Yet conventional wisdom holds that cancers require more than one offending incident. So, how can a single driver event lead to cancer?

To explore that question, the team, including co-senior authors Keith Ligon of DFCI and Broad and Adam Resnick of CHOP, harnessed a variety of approaches to understand how the MYB-QKI fusion works. They found that it promotes cancer in three ways:

1. The fusion generates an abnormal protein, MYB-QKI, that causes cells to grow faster than normal and form tumors.
2. The rearrangement of MYB and QKI brings the two genes’ regulatory controls closer together, which not only drives activity of the abnormal gene fusion but also establishes a cycle that enables it to remain continuously active.
3. QKI, which normally acts to dampen tumor growth, is inactivated when it is joined to MYB, disabling an important brake that helps to slow down tumor growth.

Remarkably, this is the first example of a single mutation that sets in motion a three-pronged push toward cancer growth. Yet the researchers believe it could be a general mechanism that is relevant to other cancers — in children, especially, but perhaps also in adults.

The discovery also has important clinical implications. Since MYB-QKI is unique to this form of PLGG, it can be used as a molecular marker that can help definitively diagnose angiocentric glioma. “This finding will be a huge help to neuropathologists in trying to diagnose these really challenging and unusual tumors,” said Ligon, himself a neuropathologist as well as a Broad associate member. “In fact, we have already launched two new diagnostic tests around this finding in our clinical labs.”

Although targeting this fusion with a drug will likely prove to be quite challenging (since MYB works as a transcription factor, a molecule that is notoriously difficult to aim drugs at), the pathways that work downstream offer some intriguing avenues to potential new therapies.

But perhaps the broadest and most immediate impact will emerge in the laboratory.

“A big reason people don’t study these pediatric low-grade gliomas compared to ovarian, breast, or other types of adult cancers is that they are hard to study, there are no model systems, and it is really hard to get tissue,” said Pratiti Bandopadhayay, a pediatric neuro-oncologist at DFCI and Boston Children’s Hospital, a postdoctoral fellow in Beroukhim’s lab, and one of the study’s first authors. “But now that we understand one of the major causes, we have an important new model we can use to unlock the biology of these diseases.”

Bandopadhayay, Beroukhim, Ligon, and their colleagues, which include co-first authors Lori Ramkissoon and Guillaume Bergthold (researchers at DFCI and Broad), along with Payal Jain (a researcher at CHOP), underscore the highly collaborative nature of their work, spanning numerous investigators and organizations. Since angiocentric glioma is a rare tumor, they convened an international consortium, the Dana-Farber/Harvard Cancer Center Pediatric Low-Grade Astrocytoma Consortium, to help gather a sufficient number of patient samples for study. The work was also supported in part by families of children affected by low-grade gliomas, who established A Kids’ Brain Tumor Cure Foundation (also known as the Pediatric Low-Grade Astrocytoma or PLGA Foundation) to raise funds that accelerate medical research and to highlight the need for more government funding.

“This really is the work of many people,” said Beroukhim. “We could never have done it without them.”

The beauty of imbalance
“Molecular sleds” slide cargo along DNA