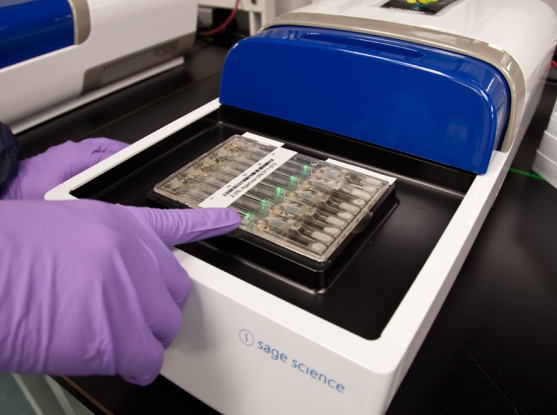 By Haley Bridger
Even when everything is in working order, the team in the Broad’s Genome Sequencing Platform is never completely satisfied. Someone is always tinkering, inventing, or thinking about a way to strengthen one of the links in the chain of events that leads to sequenced DNA. “It’s the way we think here...

Even when everything is in working order, the team in the Broad’s Genome Sequencing Platform is never completely satisfied. Someone is always tinkering, inventing, or thinking about a way to strengthen one of the links in the chain of events that leads to sequenced DNA.

“It’s the way we think here. We look at a process and we want to tear it apart even though it’s working,” Sheila Fisher says. Sheila is the assistant director of technology development for the Broad’s Genome Sequencing Platform. “We know we can make it better – we chip away at it over time to increase the quality, reduce the cost, or scale up in a way that we haven’t been able to before.”

Sheila and her colleagues had been itching to start chipping away at one particular bottleneck in the steps that come before sequencing whole genomes. In order to fish out interesting regions of the genome that may harbor mutations, researchers often perform a technique called gel extraction to collect only DNA fragments of a specific length. This involves a number of steps, from mixing up an agarose gel (that’s the same “agar” sugar found in vegetarian gelatins and a variety of food products), pouring the gel and waiting for it to solidify, loading DNA into wells at one end of the gel, and eventually, cutting out a small piece of the gel that contains DNA of interest.

“The process is time consuming and laborious,” says Sheila. The process also leaves room for human error, especially at the scale at which the platform operates. Additionally, the wells of a gel are not completely isolated – this means that the risk exists for possible sample-to-sample contamination within a gel or from repeated use of a gel running apparatus. Sheila’s team was looking for a way to reduce the amount of time, effort, and errors of this process when they were approached by Sage Science, a company that produces life science products.

Through a series of informal discussions, the researchers from the Broad Institute and from Sage developed a solution: an instrument that can perform gel size selection in an automated fashion and is completely tunable to different fragment sizes. In addition, the gel cassette it utilizes has isolated chambers for each sample to virtually eliminate the risk of cross contamination (you can find more on Sage’s website here).

For many months, Broad researchers and their partners at Sage worked on making a system that would work for the platform’s needs. And after the first cassette, the two groups continued working closely, building up a suite of tools that have had a big impact on the platform’s work.

The upshot of this device is that researchers can now get more DNA out of a sample, and they can do it faster and more efficiently. “With a normal gel, you take a slice of agarose and have to extract the DNA out of it – you lose a lot of DNA in the process,” Sheila says. She explains that because the samples come directly out of the cassette without needing gel extraction, the yield is much higher.

This means that the researchers can start with less DNA. Sheila estimates that instead of needing three or four micrograms of DNA, they can now start with a paltry 100 nanograms – that’s a 40-fold decrease. This allows the Sequencing Platform to take on samples that they previously could not, such as DNA from tumors (these samples often contain very little genomic material).

“This opened up a significant number of samples to the process that we couldn’t sequence before,” says Sheila.

Sheila and her colleagues have been using the Sage Pippin Prep system and gel cassettes for about a year now. The partnership with Sage continues to this day as the groups come up with new ways to make improvements. “We’re always looking for good partners that have ideas that will allow us to push genome sequencing even further out,” says Sheila. “We were able to build a very strong partnership with Sage, and the result was a true co-development project.”

Broad artist in residence at MassArt
WormToolbox in action