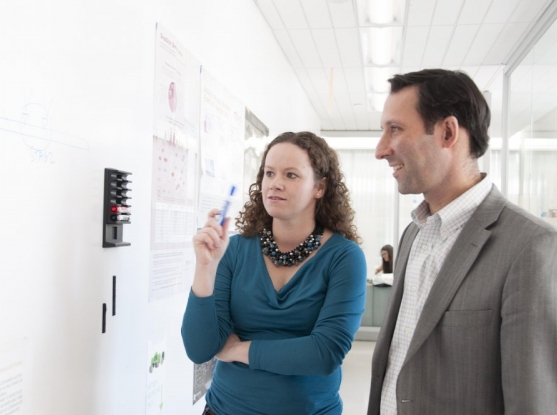 By Angela Page
Zuzana Tothova has a weakness for uncharted territory. It has inspired her to pursue an ambitious project at the Broad Institute of MIT and Harvard where she’s using a slew of novel technologies to better understand a blood disorders called myelodysplastic syndrome (MDS). But this weakness for the...

Zuzana Tothova has a weakness for uncharted territory. It has inspired her to pursue an ambitious project at the Broad Institute of MIT and Harvard where she’s using a slew of novel technologies to better understand a blood disorders called myelodysplastic syndrome (MDS). But this weakness for the unknown runs deep and can even be blamed for how she found herself in the United States in the first place.

Tothova, now a postdoctoral scholar at the Broad and Dana-Farber Cancer Institute (DFCI), grew up in Slovakia and never expected to set foot in the United States, let alone establish a career here. “My parents were both academic physicists and had limited opportunities,” she says. But her sense of adventure, along with some hearty encouragement from her family, compelled her to travel 4,000 miles around the world to participate in a high school exchange program that reset the course of her life. She returned to Slovakia to finish high school, but a seed had been planted and she came back to the US one year later to attend Williams College in western Massachusetts. Her next stop was Boston and the combined M.D./Ph.D. program at Harvard Medical School and MIT, where she studied normal and diseased hematopoietic (blood-forming) stem cell biology and began laying the groundwork for the investigations she is now pursuing at the Broad.

While writing up her thesis, she “invaded” a nearby office that would soon be assigned to a young new faculty member. “I felt very guilty about taking that office because she was doing something so productive in it,” recalls Broad institute member Benjamin Ebert, a physician-scientist who specializes in diseases of the bone marrow and is a world expert in MDS. “I wasn’t going to be able to do anything nearly as productive.”

It’s been almost ten years since that shared office facilitated many conversations about blood cell biology. And now, after completing her clinical training as an adult hematologist and oncologist at the Brigham and Women’s Hospital and the Dana Farber/Harvard Cancer Center, Tothova is a postdoctoral scholar in Ebert’s lab. She’s studying how a family of genes that code for a circular protein complex called the cohesin complex are implicated in MDS and acute myeloid leukemia (AML).

Ebert is only half joking when he says that one of the primary goals of starting his lab was to recruit Tothova back. It turned out to have been a pretty good bet: Within the first couple months of joining the lab, Tothova participated in the first class of the Broad Cancer Program’s computational boot camp, which marked the first step in facilitating a deeper relationship between Ebert’s lab and the Broad. The experience was also instrumental in introducing Tothova to the large datasets and technologies she’s using now, as well as to the key people within the Broad community who are helping her apply them to the questions she’s asking.

In 2013, The Cancer Genome Atlas (TCGA) team, which included another institute member at Broad, Gad Getz, published a study in the New England Journal of Medicine charting the genetic landscape of AML. The paper reported that the cohesin genes — to every cancer researcher’s great surprise — were mutated in 13 percent of the tumors the team examined. Similar results were also reported for MDS.

“Ten years ago we knew relatively little about the genetic basis of leukemia and MDS,” says Ebert, “but now, through large-scale sequencing studies, we have a catalog of the commonly recurring mutations in those diseases.” What remains a mystery is how these mutations cause disease and how to target them therapeutically. That is what Tothova is working to understand now. With support to the Ebert lab from BroadIgnite — a philanthropic fund at Broad created to advance the careers of young scientists and their ideas — Tothova is attempting to uncover the functional implications of the cohesin mutations and therapeutic strategies for AML and MDS that target them.

“We found it very surprising that cohesins were so frequently mutated in MDS and AML,” Tothova said, “because the proteins encoded by these genes carry out very essential roles in the cell. The mutations in these genes are predicted to be loss of function mutations, and we were not sure how a cell could survive without these proteins.”

When the TCGA results first came out, scientists suspected that the underlying disease-causing culprits were mutations that impaired cohesin’s ability to package DNA when the cell divides. The idea was that these inactivating mutations led to broken cohesins that didn’t perform their job: parsing equal amounts of DNA into new cells during development. “If you didn’t have good separation of your chromosomes, one cell would get more chromosomes than the other cell and then you’d generate a state called aneuploidy,” says Tothova. “But that’s not the case because when we look at patients with MDS and AML who have these cohesin mutations, the chromosomes look pretty normal.”

Tothova came up with a different hypothesis. In another of cohesin’s roles, the ring-shaped protein lassos a bit of DNA to create a loop that brings normally disparate regions of the genome together. If these contain regulatory pieces of DNA called enhancers and promoters, this can have big implications: it can turn some genes on and others off simply as a result of where they’re located on the loop. If the cohesin is mutated (as in cancer cells), that loop either never gets formed or is formed in the “wrong” places, significantly altering normal gene expression. “That’s what we suspect is happening, and we’re doing experiments to understand the mechanism,” Tothova says.

These experiments required her to create an entirely new model for studying cancer in the lab. Typically, scientists are limited to studying diseases like this in animal models. “But these studies don't often translate very well to findings in humans,” she says. Instead, she uses CRISPR technology, to engineer the cohesin mutations in hematopoietic stem cells harvested from human bone marrow or umbilical cord blood. Then she transplants those cells into mice. Since cancer is a complex disease and not often attributable to a single mutation at a single point in time, Tothova then goes back into the mouse blood to harvest the cancerous human cells after letting them proliferate for a while, and introduces another mutation. Thanks to this approach, Tothova explains, “we’ve been able, for the first time ever, to really model the genetic complexity of the disease and also follow the progression and dynamics of what happens to the disease over time.”

In conjunction with Steve Carr’s group in the Broad’s Proteomics Platform, Tothova has been able to determine what happens to the cohesin complex when the most common AML and MDS mutations occur.

“We found some very interesting hits in that experiment,” she says. “When you lose one of the components of a cohesin complex, the function of the complex seems to change. So it's binding to many different things now, and we think it may be losing its normal function.”

She thinks these phenomena are a result of the fact that cohesin is no longer able to create that important loop described earlier. To figure that out, Tothova is working closely with chromatin expert Job Dekker, a frequent Broad collaborator based at the University of Massachusetts.

At the same time, she’s also working with the Genetic Perturbation Platform to determine whether cells that harbor the cohesin mutations have an Achilles heel that could serve as a therapeutic target. They’re performing synthetic lethality screens by knocking down candidate genes in healthy cells as well as cells that already have broken cohesin genes, and then observing which alterations kill the cancer cells exclusively. They already have a series of “tantalizing leads.”

“One special thing about the Broad and also about Zuzana as a scientist is that she can marshal all these extraordinary technologies on a particular problem,” says Ebert. “She has been able to go all the way from making models with particular mutations and understanding how they work, to understanding new therapeutic opportunities, and then testing those in a preclinical model. As a physician scientist she hopes to one day be able to introduce that into the clinic.”

“But none of this would have happened without Ben's extraordinary mentorship,” Tothova says. “It takes a special lab and a special leader to be inspired to go in all these different directions.” It also wouldn’t have happened without the many outstanding role models she’s encountered since high school…or without Tothova’s obvious desire to take the road less traveled.