Putting a neglected disease in the spotlight 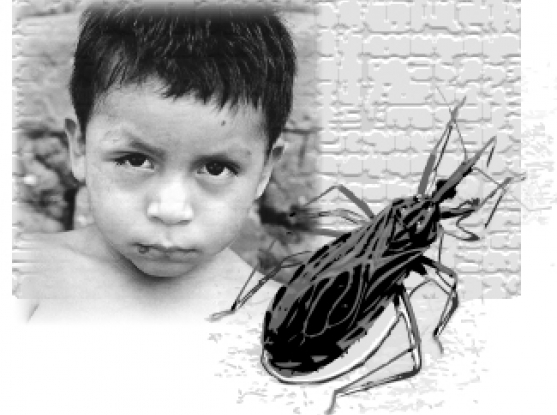 Chagas disease
By Paul Goldsmith
Heard of Chagas disease? Chances are, unless you live in Central or South America where the disease affects an estimated 8 million people, you probably haven’t. Discovered more than a century ago by Brazilian physician Carlos Chagas, Chagas disease is a potentially-fatal infection caused by...

Heard of Chagas disease? Chances are, unless you live in Central or South America where the disease affects an estimated 8 million people, you probably haven’t.

Discovered more than a century ago by Brazilian physician Carlos Chagas, Chagas disease is a potentially-fatal infection caused by Trypanosoma cruzi (T.cruzi), a parasite transmitted to humans by blood-sucking insects known as “kissing bugs.” Once limited to rural tropical regions, the disease now affects patients in a host of countries — including the United States where an estimated 300,000 are afflicted. Treatments options for the disease are limited, and largely ineffective. And yet, Chagas remains mostly overlooked by the medical and scientific communities.

“Compared to other infectious diseases, like malaria and tuberculosis, Chagas hasn’t gotten the attention it deserves — particularly from the pharmaceutical industry,” said Sivaraman Dandapani of the Broad’s Center for the Science of Therapeutics. “But that’s finally changing.”

After years of neglect, a new finding from Broad scientists may one day force Chagas into the global spotlight — by curing it. Earlier this year, in a paper in the journal ACS Medicinal Chemistry Letters, Dandapani and an international team of researchers reported the discovery of a promising new small molecule that may hold the key to defeating Chagas disease.

One of the great challenges of treating Chagas is that the disease is characterized by two phases — an early, “acute” phase, and a delayed “chronic” phase. In its acute stage, Chagas is often mild, presenting commonplace symptoms such as fever, swelling, and skin lesions. Current therapeutic methods are only effective against this early phase of the infection. But due to its mild nature, the initial infection often goes unnoticed. Left untreated, the parasite begins replicating and can re-emerge, often decades after initial infection, and cause serious digestive problems and sudden cardiac death.

“To this point, nothing has worked against the internal, replicating form of the parasite,” said Michelle Palmer, director of the therapeutics platform at the Broad, and a contributing author of the study. “We specifically wanted to stop that replication process.”

To identify potential drug leads for Chagas, Dandapani and his team screened 100,000 unique compounds in the Broad’s Diversity Oriented Synthesis (DOS) library against the disease causing parasite T.cruzi . Results of that initial chemical screen revealed eight compounds thought to have the potential to inhibit T.cruzi growth. Those eight compounds were then tested against incubated T.cruzi-infected cells, and the results caught the team by the surprise.

“Some of the secondary assays showed the compounds not only stopping the growth of T.cruzi, but in some cases, completely killing the parasite,” said Dandapani. After additional testing, the team selected the most effective small molecule based on its chemical stability and potency. And although the team has yet to identify the mechanism being targeted, they believe the compound’s effectiveness is likely due to its unique chemical structure.

“If you look at the chemical structure of the current first line drug for Chagas, it is very simple,” said Dandapani. “Compared to that, the compound we published is much more complex. Because it is structurally complex, the interactions with the molecular targets are more likely specific.” This complexity is a hallmark of the Broad’s DOS library, which was created to emulate the incredible range of small molecules found in nature.

“This is really the result of the up-front investment in chemistry by the Broad. We built this compound collection from scratch, from chemistry intuition, and it’s paying dividends,” said Dandapani.

Only time will tell if the compound ever reaches patients, but Dandapani and his team are hopeful. With the help of a grant from the Global Health Technology Fund, an international nonprofit organization, the Broad is working with Eisai Co., Ltd., a Tokyo-based pharmaceutical company, to optimize the compound in preparation for eventual testing in animal models.

“The Broad has an interest in neglected diseases and finding unique biological profiles for drug development,” said Dandapani. “This is a good example of that. If we are successful, the whole world would be a better place.”