Power to the patient: Broad cancer researchers discuss the importance of direct-to-patient engagement in the fight against both common and rare cancers 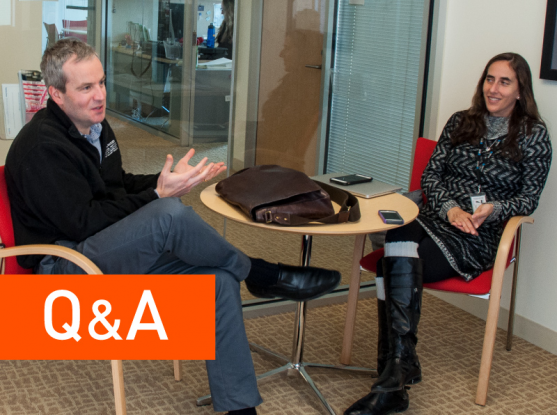 By Lisa Girard
Corrie Painter, associate director of operations and scientific outreach at the Broad Institute and one of the creators of The Metastatic Breast Cancer Project, and Eliezer Van Allen, an oncologist at Dana Farber Cancer Institute and an associate member at Broad, discuss patient engagement, which is critical for advancing our understanding of both common and rare cancers and empowering people to get in the driver's seat of clinical research.

Why do we need more patient engagement in cancer research? What's the problem we are trying to fix?

Corrie Painter: Across the board, patients have largely not been involved in the process of research, yet they are the biggest stakeholders in the outputs of our collected efforts. So just by virtue of what we are trying to do as researchers, scientists, and clinicians, patients should be included so they have an understanding of what it is that is actually going on, what the process is. A lot of patients do not have a good idea about what happens. They are curious and interested. They want to know, but there are no good avenues to bridge that large gulf that exists between their understanding of science and the science that's actually being done on their tissues.

Eliezer Van Allen: It's also true that they are among the most powerful contributing stakeholders for accelerating research because they have the choice to do what they want with their precious biological material by virtue of the way our laws are structured. Because of that, if they are so engaged and so driven, they can help change the way we do research from the ground up, and that's an enormous opportunity.

CP: Absolutely. I could not agree with that more. I feel there is this moral imperative to include and engage patients from the get-go, because this is about them and they have been largely left out from the entire process. I know this as a cancer patient myself who has signed consents and then had my tissue sent places where I had no idea what happened to it and it's very frustrating.

So just understanding the process is really helpful to a patient who is facing something catastrophic. And then there is the point that Eli is making, which is that we, on the other side of the bench, want to move quickly in the space of anything that requires human tissue and we are going to do that a lot better and faster with patients involved, because it's their tissue. We have not set up the infrastructure to exquisitely identify the tissues we need to accelerate the pace of research. We are siloed off in terms of our understanding of where tissue even is, and our ability to get access to that tissue is housed in consents, [institutional review boards], and [material transfer agreements], and it's very challenging from the research side. If you just ask the patient though, and they have control and are interested in participating, it's their signature that's needed. That's all. That cuts through so many barriers while at the same time empowering that very patient who in the end will have a better understanding of what's going on.

Why do you think there are not enough tumor banks or stored samples for certain cancers?

EV: At the end of the day it comes down to lack of funding. There is a significant expense involved in trying to store, maintain, and carefully curate tumor samples and many cancer types don't have the backing to have these banks exist.

CP: When I was starting Angiosarcoma Awareness, my own non-profit, I spent a year looking into starting a biobank for angiosarcoma. What I found was that it was going to take at least $70,000 a year to maintain, including one full time employee. If you have a super rare cancer, even having a group of people come together to support one full time employee is a big challenge. You need a lot of regulatory oversight to be able to find the tissue and transport the tissue and cut the tissue.  It's very difficult. Ultimately, I realized it was not going to be tractable.

EV: Within the traditional academic funding model it's hard to get something like a tumor bank supported through a typical grant-making process, for example. If that isn't an option, and if there isn't a huge community of folks to support it, then it's very difficult.

CP: Ultimately you need a really strong driver. Whether it's an advocacy group, or an academic person, or pharma, you need a driver to actually say, "Hey, this is important and we are going to put the money and the resources behind it." It's difficult to get that in super rare cancers because people are not very well connected with each other, they are scattered all over the place, and because of lack of funding.

What cancers need patient engagement the most and why?

CP: I definitely think that all cancers would benefit from patient engagement, but for completely different reasons. Rare cancers have the most to gain from patient engagement because there is a complete lack of resources across the board. Lack of resources for basic understanding of the disease, for identifying patients should there be a discovery and you want to get a drug into a patient — basically a lack of resources for every point along the spectrum from diagnosis on. So if you can bring these people together, you can access their tissue and they can form a support system — emotionally, financially — they can rally around their disease. They could even, in turn, support a clinician and they could all go to that person and accrue enough momentum to have phase 1 and phase 2 trials run for their very rare cancers.

For patient engagement efforts around common cancers, like the Metastatic Breast Cancer Project at Broad, there are so many rare phenomena that could yield huge clues into what drives the disease or the response to therapies that we could learn and glean from crowdsourcing patient experiences that we would never otherwise get. It's those rare phenotypes, or people that are outliers on any spectrum within the larger cohort, such as the very young people, that we are desperate to learn from. Maybe there is something in their germline that we never really appreciated because we were never able to get enough people all under the age of thirty. Or maybe for people that have had extraordinary responses to therapy, if we get enough of the cohorts for each of the different types of drugs then we can deeply characterize the genomics and we can understand why. You will never find that at any one center — you will only find that if you pool the mass of resources together, and this is even for common cancers that we're talking about.

EV: Tough question because we feel like we have a lot of work to do in all cancers. The difference being that in common cancers we have a general sense of the landscape of these diseases at the genomic level, or at least sort of garden variety versions of those cancers, and a million questions to ask within those diseases. For some of these rare cancers, we don't even know where to begin.

Are there examples of successful efforts to engage patients that have yielded new biological insight or appear promising to do so?

CP: The Metastatic Breast Cancer Project was the first Broad-launched project that focused on direct-to-patient engagement. I would say we've learned a tremendous amount just from patient-reported data that I don't think we fully appreciated when we first conceived of the project. We have patients answer a set of questions before they are officially part of the project — well before tissue or medical records are collected. But because we ask patients about their experiences with cancer, and whether or not they have had extraordinary responses, and been on any therapy for a certain duration, we've been able to identify up-front different types of responses that people have had to different types of therapies. That, in and of itself, is unbelievably powerful because in the subset of patients for which we have gotten their medical records and checked what they recorded against them, so far so good in terms of concordance. If that's the case, it means that for the 2,800 people in this project that have given us patient reported data, instead of consenting everybody and getting 2,800 full medical records in order to understand the nuanced responses that they had, they just tell us themselves. It cuts out so much just by engaging directly with patients in order to identify that needle in the proverbial haystack, which lets us drill down on the genomics of just that cohort.

EV: As Corrie is saying, even before you get to the genomics, you've already made some interesting observations. This patient-driven movement is already yielding benefits in metastatic breast cancer, setting the stage for rare cancers like angiosarcoma where I think the questions are slightly different but the opportunities are profound. It also creates the opportunity to leverage partnerships and collaborations broadly. In the germ cell world we've already heard of exciting collaborations with colleagues in other institutions, like MSKCC, who are also interested in this disease, but we also recognize the same problem whereby you can empty out the tumor banks of two large institutions and still not have enough [tissue] to learn from. It is necessary to cast a broader net across the community spectrum for these rare diseases and I think that's where there is so much promise and hope and opportunity.

CP: And really speaking to that point that Eli just made, one of the reasons we are doing the angiosarcoma project rests on one Facebook post we put up last year. I put up a post saying, "By a show of likes, can you tell me if you are alive with the disease and willing to consent to allow us to use your tissue samples and medical records for research even though you are not going to get anything back?" I found over 90 people living with the disease — and this is something that hits 300 people a year worldwide. 90 people in one hour said "yes."

It's important to stress that it's a two way street. It's not just researchers that are trying to further their careers or make their papers better. The engagement has to be focused on what do the patients get out of this in terms of their knowledge, education, and their understanding of the process of research and this is valuable in and of itself. The vast majority of people I've worked with, and I've worked with thousands now,  just want to know that they've contributed. That they've moved the needle a little bit.

EV: Yes, and for rare cancers the biggest challenge still remains that we can't even find them. Patient engagement creates an opportunity for them to speak up, participate, and say, "Count me in". It brings them into the research conversation, with them in the driver's seat.

CP: They feel so inspired by it. One woman, whose tissue just showed up today, put in a public forum this really lovely post that was basically, "Hey y'all, I just signed a consent to share my tissue. I finally get to give back after being on the receiving end of treatment. I want to know who's in with me. Which one of you are going to push research forward? I want to know. I don't care if I get anything back, it's my opportunity now." Which I think is always the message we hoped would be carried forward with all of these direct-to-patient initiatives. So to see that actually posted was really cool.