Partnering with patients to create laboratory models of cancer 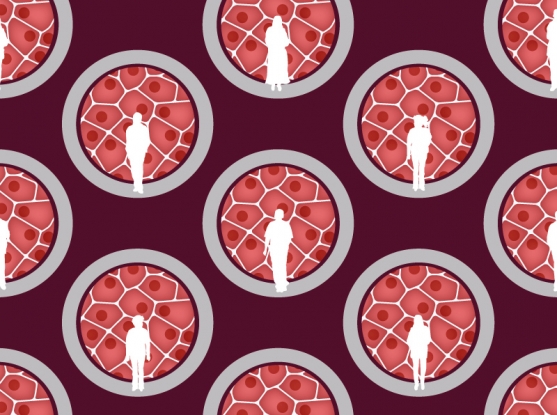 Credit : Susanna Hamilton, Broad Communications
By Jesse Boehm, Andrea Saltzman and Corrie Painter
Partnering with patients to create laboratory models of cancer: a look back and a look ahead

It’s 2017. It’s hard to believe that over 65 years have now passed since the initial derivation in 1951 of the first human cancer cell line. This line, called “HeLa,” originated with cells taken from a cervical tumor without the knowledge or consent of their donor, Henrietta Lacks, an African American woman living in Maryland. With this week’s release of a new HBO film, “The Immortal Life of Henrietta Lacks,” based on the book by Rebecca Skloot, comes renewed attention to this complex story that shines a bright light on both the perils and promise of research involving cancer patients.

But, what progress has since been made in safeguarding patient privacy and responsibly achieving informed consent? How are Broad Institute researchers engaging cancer patients in cell line research today? Where is more effort needed? It’s worth stepping back for a moment to take a look at the role of cell lines in cancer research today and how we are striving to represent the racial and genetic diversity that more accurately mirrors cancer patients and their disease.

What’s so special about cell line models of cancer, anyway?

While tumor cells seem to be vigorous compared to normal cells, they in fact have vulnerabilities—or ‘dependencies’— that normal cells lack. These dependencies are attractive therapeutic targets, as drugs that attack them would kill tumor cells while preserving normal cells. But we need to predict which drugs are likely to work for which patients. Thus, scientists are intently focused on making it possible to read off the molecular profile of each patient’s tumor and use this information to predict which drugs, in which combinations, should be used. This ambition is often referred to as “cancer precision medicine,” and the early fruits of this framework have been unmistakable.

While clinical trials provide one important path to learn which drugs will work for which patients, the pace of such trials is slow and not all drugs can be systematically tested on all patients. Therefore, a complementary approach is the generation of laboratory-based models of cancer. These models grow in sufficient quantities to enable researchers to systematically test existing drugs to find the relationships between the molecular makeup of tumors and their associated dependencies. Thus, these laboratory-based “dependency maps” of cancer should inform future clinical trials for patients to come. But first, a sufficient number and diversity of cell models of cancer are needed, and these must, with appropriate consent from the patient whose cells were used to create the models, be made available to the scientific community.

How many laboratory models of cancer exist today?

The creation of HeLa cells in 1951 laid the groundwork for the development of additional cell lines. Over the next 4 decades, efforts to establish additional cancer cell lines from patients achieved modest success, culminating with the aggregation of a panel of 60 cell models representing 9 major tumor types by 1985 as part of the National Cancer Institute 60 (NCI-60) collection, and the completion of approximately 1000 such models by 2012. Although around a thousand cancer models initially seemed sufficient, now that we more fully understand the genetic diversity of cancer, many thousands of models are likely needed.

What’s exciting now is that a new suite of technological advances are making it possible to generate patient-derived models from many cancer types, with substantially higher success rates than historical approaches. These include new, “next-generation” laboratory-based growth media, new types of three dimensional cancer models called “organoids,” and fragments of tumors that can grow in mice that may preserve some aspects of tissue structure called “patient-derived xenografts,” or “PDXs”. Scientists are still learning which of these models are best for answering which types of scientific questions. But it’s clear we’ve now reached a tipping point; it’s becoming possible for laboratories everywhere to use increasingly relevant next generation cancer models to propel discovery.

At the Broad Institute, together with a coalition of hospital partners, we’ve launched a new initiative, called the “Cancer Cell Line Factory,” which aims to bring these new technologies together to reach production scale, with the ambition of better serving the scientific community. Over the last several years, over 1000 patients with cancer have provided informed consent to participate in the project and the first 100 successful new models are currently being prepared for distribution.

This effort, and others like it, are now trying to ensure that a rich tapestry of cell models representing the full spectrum of patient tumors are generated and used to discover new cancer drugs. For instance, for many cancer types (e.g. rare cancers, prostate cancer) and genetic subtypes, few or zero models currently exist today! In addition, a history of mistrust and suspicion justifiably fueled by a number of ethical lapses in the research community has left many African Americans wary of participating in research and few models from underrepresented patient populations such as African Americans currently exist, mirroring larger challenges in achieving full inclusion in modern biomedical science. There is much more work to do for sure.

What makes this moment particularly exciting is the important role that cancer patients are beginning to play in accelerating progress. In stark contrast to 1951, today, Broad researchers pay particular attention to the process of informed consent for research involving human subjects as required by federal research regulations that were passed in the late 1970s and early 1980s. For the Cancer Cell Line Factory project at the Broad, patients are informed that they have the opportunity to donate leftover tumor samples that aren’t needed for their clinical care. In our current consent forms and conversations with prospective research volunteers, we explicitly describe how donated samples will be used for genomics research, that “immortal” cell models may be created and that the new models will be shared with the scientific community. 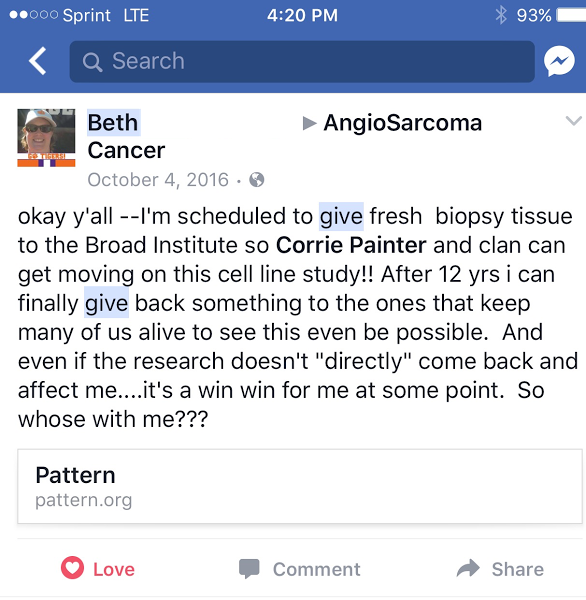 We’re now taking the concept of patient-driven research one step further. Empowered patients with cancer can accelerate cancer research in a way that no one else can. To achieve this goal, partnerships between patients and cancer researchers are needed. Building upon the success of the recent direct-to-patient Metastatic Breast Cancer Project and the launch of the Angiosarcoma Project, we’ve launched a new pilot initiative sponsored by the Katie Moore Foundation in partnership with the Rare Cancer Research Foundation. As part of this project, we’re inviting patients with particular rare cancer types, anywhere in the country, to provide consent online and initiate a biologistics process to send fresh tumor samples to the Broad’s Cancer Cell Line Factory. We’ve been pleasantly surprised at the outpouring of interest and support from patients (see Facebook image). With further refinement and scale, we aspire to learn how to best invite patients to act as true partners in cell line model derivation projects looking forward.

With drug resistant infections on the rise, Ashlee Earl looks for clues in DNA
Harnessing the flood: Scaling up data science in the big genomics era