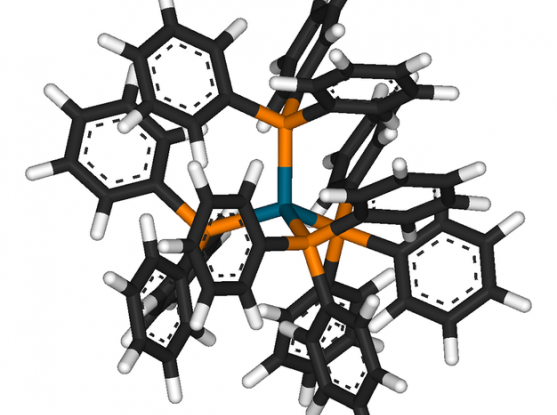 Palladium catalyst.Source: Wikimedia Commons
By Alice McCarthy
When I called Jeremy Duvall and Damian Young, two of the Broad's organic chemists, to talk about the 2010 Nobel Prize in Chemistry winners, I was checking in with them to discuss the relevance of the work recognized. What was surprising to me was that the work from the winners represents not just...

When I called Jeremy Duvall and Damian Young, two of the Broad's organic chemists, to talk about the 2010 Nobel Prize in Chemistry winners, I was checking in with them to discuss the relevance of the work recognized. What was surprising to me was that the work from the winners represents not just some piece of obscure chemical synthesis minutia. This was chemistry that we use on a daily basis here at the Broad.

On Wednesday morning, three chemists received the call announcing they had been chosen as co-recipients of the award. Richard F. Heck, formerly of the University of Delaware, Ei-ichi Negishi, at Purdue University, and Akira Suzuki, from Hokkaido University, were awarded the prize for their work in synthetic organic chemistry. More than 30 years ago, the men developed a transitional strategy to make carbon-carbon bonds using the metal palladium. In the larger sense, metal-mediated cross couplings quickly became foundational reactions in organic synthesis.

“For an organic chemist this is extremely exciting for this type of chemistry to be recognized at the Nobel level,” says Jeremy Duvall, group leader, of diversity oriented synthetic (DOS) chemistry within the Broad’s Chemical Biology Platform. Organic chemists working in the DOS group and the Broad’s Chemical Biology Program build unique organic chemical structures, largely on a carbon backbone, as a matter of course. Building new organic chemistries requires new tools and the metal-mediated reactions are some of the best developed in the past 30 years. Adding many varied chemistry groups to the carbon backbone is something Broad scientists do on a daily basis.

As with most things in organic chemistry, these reactions are named after the researchers who developed them. The Suzuki reaction is an essential ingredient in the Broad’s organic chemistry kitchen namely because it is an encompassing reaction that provides consistent, robust, and dependable reactions every time. “This allows us to use it routinely with confidence in a high-throughput way, especially for the appendage site diversification syntheses we do,” Jeremy adds referring to the often complex or unusual chemistry designs the Broad’s chemists make.

“Without having these reactions, it would be extremely challenging, if not impossible to build and work with these chemistry scaffolds,” adds Damian Young, group leader of DOS chemistry in the Chemical Biology Program. Many of the Broad’s libraries include molecules synthesized in part with these reactions. In his March 2010 paper, Damian heralded the importance of these palladium-based contributions saying, “One of the bedrocks of modern organic chemistry is the use of transition metal catalysts to effect the formation of carbon-carbon bonds.” Damian, Jeremy, and other organic chemists at the Broad and elsewhere can readily modify these compounds with all variety of chemical handles for purposes of probing biology. These reactions have become routine in the pharmaceutical industry for making new potential drugs. You can actually purchase a stash of palladium catalyst, such as the original
Pd(PPh₃)₄ catalyst, from commercial sources for all your synthesis needs.

It is also amusing, if nothing more, to see that the price of palladium metal reached a nine-year high the day after the Nobel award was announced….

The skinny on fat cells
Highlights on height