Out of the lamplight 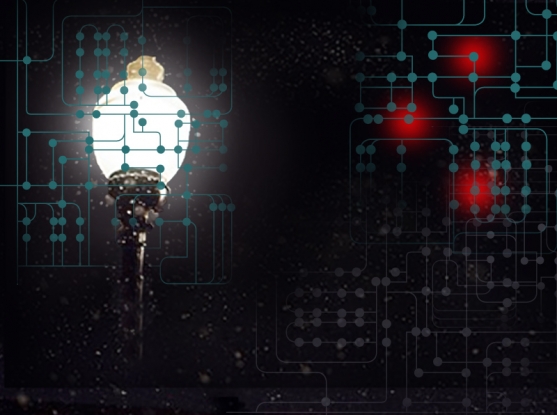 By Editor
The human body is governed by complex biochemical circuits. Chemical inputs spur chain reactions that generate new outputs. Understanding how these circuits work—how their components interact to enable life—is critical both to advancing basic biology and to identifying new treatments to disease, which arises when these circuits misfire. But getting to that understanding is no trivial task.

The human body is governed by complex biochemical circuits. Chemical inputs spur chain reactions that generate new outputs. Understanding how these circuits work—how their components interact to enable life—is critical both to advancing basic biology and to identifying new treatments to disease, which arises when these circuits misfire. But getting to that understanding is no trivial task.
To do so, researchers traditionally create a rough sketch of a cell’s inner workings by collecting a variety of molecular measurements, including protein and gene expression levels. Next they deliberately disrupt individual genes that are likely important to the circuit of interest. This process can reveal a gene’s function by showing how the cell works in its absence. The problem with this approach is that it operates “under the lamppost,” as Broad Institute core member Aviv Regev put it. That is, only that which has already been illuminated by previous research can guide these studies.
An unbiased, whole-genome approach, in which each gene paints its own detailed self-portrait unhindered by the influence of preexisting knowledge, presents an intriguing alternative. But with over 20,000 genes in the typical mammalian genome, looking at the whole thing at once, while possible, can be tricky and time consuming. The challenge is compounded further when one attempts to do this in primary cells—those that “come straight from mammalian tissues rather than immortalized cell lines, which are another step removed from the organism,” explained Oren Parnas, a postdoctoral researcher in the Regev lab. Primary cells are harder to come by and more difficult to work with, he said, making whole-genome analyses even more daunting in this context.
When Tlr4 proteins detect molecules called lipopolysaccharides (LPS), which are native to the outer membrane of some bacterial cells, they initiate an innate immune response that starts by flooding the local area with a molecule called tumor necrosis factor (TNF). The team stimulated immune dendritic cells with LPS and then monitored the resulting levels of TNF. Those cells with exceptionally high or low TNF levels were isolated and examined to reveal positive and negative regulators of the pathway. This process allowed the team to confirm many of the known regulators and to uncover some entirely new ones.
In addition to allowing the team to identify factors with no previously known biological function, the new screen also enables a more nuanced approach to understanding some of the subtler aspects of biology. Previous studies of genome editing-based screening approaches looked for mechanisms that, when disrupted, led either to cell death or survival. In contrast, this new study looks at how strongly a gene is expressed by quantifying its outputs (in this case, TNF). Marko Javonovic, also a co-first author, said, “this basically means that in contrast to a cell survival/growth screen, which can only be applied if a phenotype affects survival or growth, we can now virtually screen every biological process of interest as long as we have a marker that changes expression that can be detected and used to sort cells.”
This kind of readout introduces computational complications in the analysis of the screen results, said Parnas. But new computational approaches developed by graduate students Rebecca Herbst and Atray Dixit, as well as former Broad postdoctoral researcher Jimmie Ye, enable accurate identification of the regulators based on the screen.

Fellow co-first author Thomas Eisenhaure, who is a research technologist at Massachusetts General Hospital (MGH) and a Broad-associated scientist in the Hacohen lab, explained that the whole-genome approach allowed the team to step out of the lamplight to reveal important components that had previously not been identified. Those components include two protein complexes that had never been linked to the Tlr4/LPS pathway, despite more than two decades of intensive study.

To perform the research, the team used a mouse model developed by graduate student Randall Platt in the lab of Broad Institute core member Feng Zhang. The CRISPR-Cas9 genome editing assay requires two things: (1) a protein called Cas9 which disrupts specific genes by cutting the DNA at directed sites along the genome and (2) short bits of RNA (CRISPRs), which guide Cas9 on where to make those cuts. In the mouse model that Platt developed, every cell in the body already expresses the Cas9 protein. This means that Regev and Hacohen’s team only needs to introduce the CRISPR guide RNAs into the cells.
“It is very exciting for us to see the tools we created being put to use to elucidate new regulators of the immune response,” Platt said. “This paper elegantly combines CRISPR screening with highly specialized primary cells isolated from the Cas9 mouse. It opens up new avenues for future work not only in immune cells but potentially any cell type.”

Smile for the camera, Cpf1
Time to light the FireCloud