Opinion: Discovery or discrimination? Starting the conversation about the potential outcomes of a LGBTQIA+ targeted study 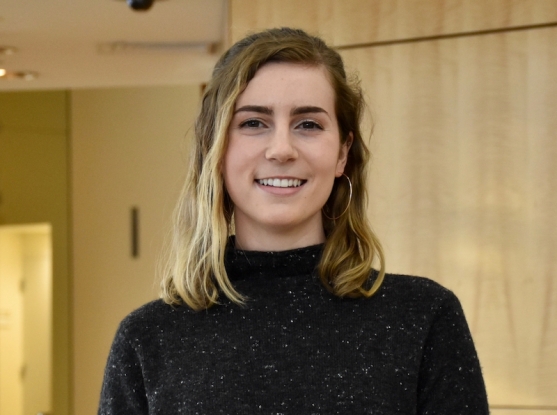 Meagan Olive. (Credit: Steven Carr)
By Meagan Olive
We as scientists must consider how our research findings will be perceived, especially in today’s climate.

Since hearing about this genome-wide association study (GWAS) of sexual orientation, I’ve been trying to parse my feelings and decide exactly where I stand. My gut feeling is that the potential negative sociopolitical repercussions of this paper outweigh any scientific benefits. Yet, there is a nagging part of me that says, as a scientist, I can’t ignore the whole reality because of an unsettled stomach. And if the past few years in this social and political climate have taught me anything, it’s that there will be no understanding—and certainly no progress — if we stand resolute in our opinions before having the hard conversations. If we don’t attempt to understand opposing perspectives, there will remain two islands of thought with nary a rowboat to traverse the gap. So, for just a moment, I will play advocate for the authors of this study in an effort to utilize this platform productively and facilitate one such hard conversation.

If the release of this GWAS paper was the plot of Jurassic Park, in which scientists engineer the return of dinosaurs, I’d be Jeff Goldblum’s character, the sober critic, saying: Your scientists were so preoccupied with whether or not they could, they didn’t stop to think if they should. In this case, however, dinosaurs remain extinct and the scientists in question are not on a quest for power and control over nature. Rather, the lead authors of this paper are scientists from the Broad Institute, who are, by our mission statement, passionate about having a positive impact on the scientific community and doing so responsibly and ethically. With this in mind, I’m willing to give these scientists the benefit of the doubt and say that when faced with the opportunity to investigate the genetic basis of sexual orientation, they must have examined the “should”.

When considering their perspective, I can come up with a few reasons why it might be important to do this work, despite the potential risks. With the rising popularity of GWAS, the study of genetic variants associated with same-sex sexual behavior is inevitable. It stands to reason that some of the best people to perform this study are scientists with the power and foresight to utilize their resources to conduct the most thorough and nuanced analysis possible. Additionally, in contrast to analogous studies, the researchers performing this study had access to data from more than 400,000 (albeit self-reporting) subjects, meaning any results are more likely to reflect actual biology rather than random chance. Also, it should be noted that during the process of writing this paper, the authors met with numerous LGBTQIA+ advocacy groups in an effort to ensure the use of proper language and presentation of results in a way that would not harm the LGBTQIA+ community. Yet, these positive notes ring hollow in the face of possible outcomes, and I’m reminded again of my gut.

Broadly, our job as scientists is to pursue knowledge and uncover the truth about the way the world works. One might argue that it is not within our right to decide what truths are “worth” pursuing. However, I believe it is also our responsibility—as the ones entrusted to understand nature and disseminate our findings—to consider the climate into which this information is being released. There is no situation in which this paper is released into a vacuum. The perception of the paper will have a more immediate and harmful impact than the findings presented within, as we are in a media-based society with a short attention span and the full capacity to weaponize good science. It is for this reason, and many more that my colleagues will outline in greater detail, that I am not satisfied with the authors’ justification for performing this study; they are ultimately jeopardizing the perception and safety of the LGBTQIA+ community.

Meagan Olive is a research associate at the Broad Institute.

Opinion: For all this science, what did we learn?
Opinion: Unintended, but not unanticipated: the consequences of human behavioral genetics