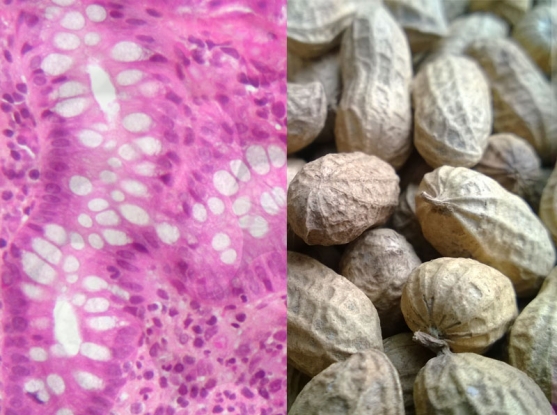 Credit : Colitis micrograph courtesy Nephron, Wikimedia Commons; peanuts courtesy Pexels
By Karen Zusi-Tran
Inspired by the Broad Institute’s Food Allergy Science Initiative, the annual two-day workshop at MGH’s Center for the Study of Inflammatory Bowel Disease this year brought together experts from around the world who are shedding light on food allergies.

The Center for the Study of Inflammatory Bowel Disease (CSIBD) at Massachusetts General Hospital (MGH) held its annual two-day workshop recently, this year titled “Food Allergy: Signals to Circuits.” Ramnik Xavier, workshop organizer and co-director of the Infectious Disease and Microbiome Program at the Broad Institute of MIT and Harvard, selected the topic based on this summer’s launch of the Broad’s Food Allergy Science Initiative (FASI) research program. Xavier serves as one of seven key scientific leaders from multiple disciplines that are coming together through FASI to tackle the poorly understood basic biology of food allergy.

About 240 people registered to attend the two days of presentations, which highlighted work being done at the Broad and beyond. Much of the research discussed is part of ongoing projects that FASI support will propel, examining how the gut senses danger in food allergens and triggers a long-lasting immune reaction involving multiple molecular pathways.

Ruslan Medzhitov, FASI’s scientific director and a Howard Hughes Medical Institute investigator at Yale University, gave a keynote address reviewing the biological pathways linking the gut and the immune system. “Think of pathological allergy as an overreaction of a food quality control system, similar to the body’s efforts to expel something toxic in food poisoning,” he explained. “Whether allergens truly have something toxic about them is an open question.”

Wayne Shreffler, part of FASI’s scientific leadership team and director of MGH’s Food Allergy Center, kicked off the workshop by introducing the concept of food allergies as a spectrum, rather than a binary condition. “We often think of food allergy as a qualitative phenotype: You either have it or you don’t, like pregnancy,” he said. “In population science, it’s important to appreciate that this isn’t necessarily the case.”

Shreffler presented data from food challenges that revealed wide diversity among study participants with food allergies. Initially, participants were given tiny portions of an allergen in an effort to desensitize their immune systems — an approach called allergy immunotherapy that helps the immune system “get used” to an allergen so that it doesn’t cause a dangerous reaction. The participants were then instructed to avoid contact with the allergen for one month.

After the avoidance period, a third of the participants were still able to tolerate the allergen, but the remaining two-thirds achieved only transient protection; their allergies eventually returned in force. The patients who regressed into clinical food allergy also had greater genetic diversity in related T cell receptors. “They have a more difficult repertoire to suppress,” said Shreffler. Understanding these differences in food allergy phenotypes, and improving the diagnostic or predictive ability of lab results, will add more value to population-based studies, he added.

Following Shreffler’s presentation, FASI leadership team member Hans Oettgen of Boston Children’s Hospital took a deep dive into the molecular mechanisms behind allergen immunotherapy — this time, based on mice engineered to develop food allergies. Oettgen told the tale of two antibodies: IgE, which often triggers allergic symptoms, and IgG. As the animals progressed through immunotherapy, becoming less sensitive to a protein found in eggs, their bodies made more IgG specific for the egg protein. The IgG indirectly inhibited the IgE signals in the animals that would have resulted in dangerous anaphylactic reactions. “IgG facilitates the reversal of allergy in oral immunotherapy,” Oettgen concluded. The results suggest that it might be useful to find ways to boost IgG production in allergy patients.

Adam Haber and Moshe Biton, postdoctoral associates with Broad core institute member and FASI scientific leader Aviv Regev, discussed results obtained by building a “cellular atlas” of the intestinal epithelium using single-cell RNA sequencing in mice. “Gut tissue is a complex mixture of cell types, each of which play a specialized role,” Haber said. “To understand this tissue, you have to understand the different types of cells and how they interact in as much detail as possible.”

The researchers used the cells’ gene expression patterns to group them into categories, and investigated pathogens’ effects on the different cell types — information that will help provide a basis to better understand the interaction between the gut cells and the immune system in food allergies. This cell atlas provides both new tools to study the gut and clues to the different cell types’ roles in gut homeostasis and physiology.

Broad associate member Vijay Kuchroo, a member of FASI’s scientific leadership team and immunologist at Brigham and Women’s Hospital and Harvard Medical School, presented data on a novel transcription factor and its role in preventing the differentiation of Th2 cells (a type of T cell implicated in food allergy).

Other presentations at the workshop covered a range of topics, including celiac disease, the gut microbiome, and new mouse models to study the gut. Researchers are continuing to explore the gut’s basic biology and its myriad connections to the immune system, and each new piece of the puzzle lays groundwork for the ongoing study of food allergy.

To learn more about FASI, please visit the program website.

Power to the patient: Broad cancer researchers discuss the importance of direct-to-patient engagement in the fight against both common and rare cancers
Broad Technology Labs: A place for science, technology, and invention to mingle 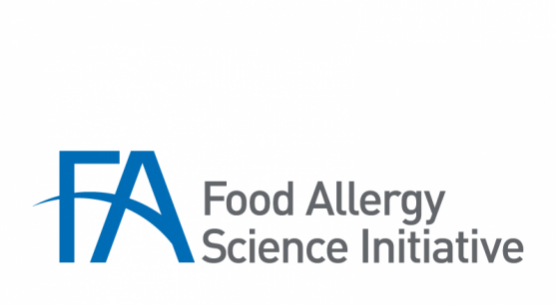