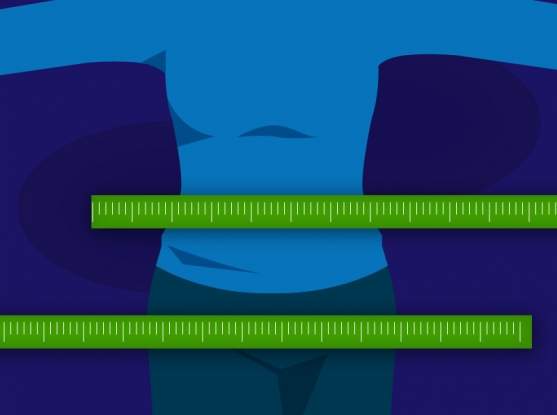 Line up any group of people who register the same weight on a scale and you’re likely to see a range of body shapes, from apples and pears to hourglasses and triangles. When it comes to how the body is shaped and where excess fat is stored, even those with the same body-mass index can have radically different silhouettes. For some, adipose, or fat, tissue settles around the muscle in the hips and thighs, giving rise to the “pear” body shape, and for others, excess fat is deposited around the abdominal organs in an “apple” shape.

While obesity in general has long been linked to higher rates of many disorders, the specific locations of adipose tissue accumulation are also associated with health risks. In observational studies, an “apple” body shape is correlated with higher rates of adverse cardiometabolic outcomes such as type 2 diabetes and coronary heart disease. However, it hasn’t been clear whether body shape actually somehow leads to these disorders or whether other factors are at play.

This murkiness is a fundamental limit of observational epidemiology studies — for example, those with coronary heart disease may have trouble exercising and consequently develop abdominal adiposity, or something else in their lifestyles such as diet or smoking habits could trigger both conditions. But a study published this week in JAMA led by Sekar Kathiresan, director of the Cardiovascular Disease Initiative at Broad Institute and the Center for Genomic Medicine at Massachusetts General Hospital (MGH), and his postdoctoral researchers Connor Emdin and Amit Khera provides evidence for a causal link.

To disentangle whether the location of excess fat, measured by waist-to-hip ratio, could actually be the cause of heart disease and type 2 diabetes, the team turned to genetics. Because the genome doesn’t change based on acquired diseases or other environmental factors, it can’t be confounded by something external. “To test for causality in a randomized trial, you could see if an intervention that lowers waist-to-hip ratio also lowers the risk of heart disease and diabetes,” explained Emdin, co-first author on the paper with Khera. “So, because genetic variants are randomly assigned at birth, we can look at people who were essentially assigned to that intervention — who were randomly assigned, genetically, to have a lower waist-to-hip ratio — and see if they have a lower risk of diabetes or coronary heart disease.”

Emdin, Khera, and their colleagues used this information to form a genetic risk profile for higher waist-to-hip ratios based on 48 SNPs, and investigated whether those genetic variants also relate to heart disease and diabetes. The 48 SNPs themselves only accounted for about 1.5 percent of the variance in body shape, but the genetic predisposition was enough to test whether the waist-to-hip ratio could be causal for the health disorders.

The team compiled genetic and health data from the UK Biobank, a study collecting biological data from more than 500,000 participants, and six previous genome-wide association studies, including one led by Kathiresan’s team called the Coronary Artery Disease Genome-wide Replication and Meta-analysis plus the Coronary Artery Disease (CARDIoGRAMplusC4D) Genetics consortium. The goal was to determine associations between the genetic risk profile for abdominal adiposity and the rate of heart disease or type 2 diabetes, as well as a myriad of cardiometabolic traits such as blood pressure, insulin, cholesterol, and triglyceride levels.

Now, some people might say that we’ve known this for 20 years, but observational epidemiology doesn’t necessarily support causation. Our study provides that evidence.

The researchers found that the genetic risk profile for a higher waist-to-hip ratio indeed associated with higher rates of type 2 diabetes and coronary heart disease, along with a number of biological factors that potentially mediate the relationship (though the molecular mechanisms by which adipose tissue around the waist leads to adverse health conditions haven’t yet been pinpointed). “The visceral adiposity ultimately leads to heart attack, but probably through higher blood pressure and higher triglyceride levels somehow,” said Kathiresan. “Now, some people might say that we’ve known this for 20 years, but observational epidemiology doesn’t necessarily support causation. Our study provides that evidence.”

Going forward, Kathiresan and his team want to know which specific genes lead to the accumulation of fat around the abdominal organs, and by what mechanisms. The findings may suggest a new way to approach the health risks associated with obesity. “If you could figure out a way to change the distribution of adipose tissue, there would appear to be health benefits,” he said. “The main way to reduce your waist-to-hip ratio is to lose weight, but these results indicate that we should be using the waist-to-hip ratio much more often in clinic to understand the risk of disease.”

Read more about the study in a press release from MGH.

Message to the Broad Institute Community Regarding the Executive Order on Immigration
With drug resistant infections on the rise, Ashlee Earl looks for clues in DNA