Broad physician-scientist
By Veronica Meade-Kelly
Rameen Beroukhim realized early in his medical training that he wanted to be an oncologist. “In medical school, I had the opportunity to work with patients who had cancer,” he explains. “I was struck by how vibrant – and how essentially healthy – many of these patients were, despite the fact that...

Rameen Beroukhim realized early in his medical training that he wanted to be an oncologist.

“In medical school, I had the opportunity to work with patients who had cancer,” he explains. “I was struck by how vibrant – and how essentially healthy – many of these patients were, despite the fact that they were contending with such a challenging disease.”

Beroukhim could see that more research into cancer was desperately needed, and he was motivated to help. He also realized that, for him, helping meant entering two worlds: he would not only treat patients in the clinic, but would also work in a lab as a researcher, searching for the biological roots and vulnerabilities of cancer. He would become a professional hybrid – a physician-scientist.

Beroukhim is now an associate member of the Broad Institute, and a member of the Dana-Farber Cancer Institute’s Center for Neurooncology. He is also an assistant professor at Dana-Farber and Harvard Medical School, and an attending oncologist at Brigham and Women’s Hospital. As a physician, he treats patients who are suffering from brain cancer – a specialty he found while conducting research as a postdoctoral fellow at the Dana-Farber and the Broad. His research, meanwhile, focuses on discovering the molecular underpinnings of brain cancer, as well as potential therapeutic approaches to this deadly disease. 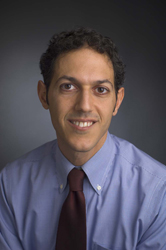 Currently his lab is pursuing two lines of research. One involves looking at the genomes of different types of brain cancer to assess how these genomes differ. Beroukhim’s lab wants to determine how those differences may account for variations in the behavior of the disease, and whether they might point to different treatment strategies. For example, his lab (in collaboration with other laboratories at the Dana-Farber, Massachusetts General Hospital, and Broad Institute) recently published studies describing the genomes of gliomas in children and meningiomas in adults. These studies identified new mutations that drive subsets of each of these tumor types. In the case of meningiomas, the mutations suggest possible treatment strategies in a disease for which no effective medical therapies are known.

His lab is also looking across the genomes of large numbers of tumors from various cancer types to see what commonalities can be found. Beroukhim collaborated on one such study, published this month in Nature, with Broad colleagues and fellow scientists from The Cancer Genome Atlas (TCGA) Research Network. That study found similarities between the genomes of the most severe endometrial cancers and certain types of ovarian and breast cancer. Such commonalities suggest that the cancers are driven by the same biological mechanism and may respond to the same treatments.

Beroukhim says that there are distinct advantages to being a physician-scientist. One is that his genomics research is heavily influenced by his work in the clinic.

“Seeing the issues that patients struggle with helps me understand what the most important clinical challenges are so that I can then go back to the research world and focus on relevant approaches,” he explains. “Although clinic time can take time away from research time, I think it adds value to the research we do. It’s also really motivating; understanding who you’re helping is a constant motivation to do the research.”

On the flip side, Beroukhim says, his interactions with patients are also informed by his genomics research. As a physician, he has frequent discussions with patients about how their disease is developing and which avenues of treatment to pursue. Being in the thick of the research world – being aware of (and sometimes responsible for) cutting edge findings in tumor biology – can be helpful in guiding patients to the most appropriate treatments or clinical trials.

“I think the benefits of being a physician-scientist go both ways,” he concludes. “The clinical work I do helps inform my research by helping to identify important problems, potential resources, and new avenues for research, and the research I do also informs my clinical work and my discussions with my patients.”

And both paths, Beroukhim says, inform discussions with other clinicians about big picture questions such as which clinical studies or clinical trials should be pursued. Since these decisions may ultimately determine what treatment options are available to patients, they can have a profound effect on cancer care. Physician-scientists have a unique and critical voice in these conversations, since they have both a foundation in research and an experienced understanding of patients’ needs.