Marfan syndrome: from gene to drug 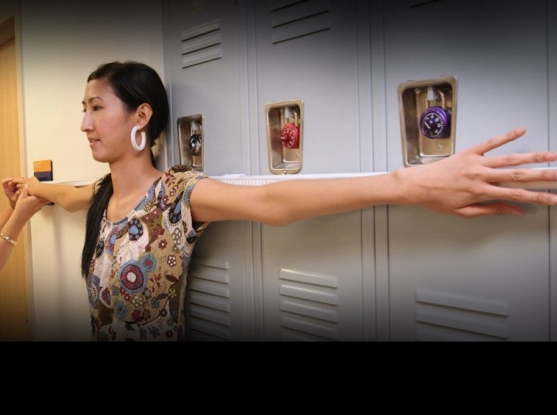 By Haley Bridger
Last week, Dr. Hal Dietz came to the Broad Institute to talk to researchers from the Broad’s Program in Medical Population Genetics (MPG) and others about his work on a rare and debilitating disease called Marfan syndrome. It’s estimated that about 200,000 people in the United States have this...

Last week, Dr. Hal Dietz came to the Broad Institute to talk to researchers from the Broad’s Program in Medical Population Genetics (MPG) and others about his work on a rare and debilitating disease called Marfan syndrome. It’s estimated that about 200,000 people in the United States have this disease, which strikes the body’s connective tissue. The Broad’s MPG Program tackles diseases that affect millions of people such as diabetes, heart disease, rheumatoid arthritis, and more, but studying rare diseases can also provide important clues about human health. Sometimes, by illuminating a key gene or pathway that has gone awry in a rare disease, researchers can gain insights into related but much more common diseases. One of the greatest challenges can be moving from a culprit gene to a potential treatment.

I spoke to Dr. Dietz last summer about his work on Marfan syndrome for a story I was working on for the Broad’s DNAtrium, which features interactive, educational exhibits. (If you are in the Cambridge area, you can visit the DNAtrium, which is located in the lobby of 7CC.) From our chat, I learned of the breakthroughs being made by Dr. Dietz and others in the understanding of and potential treatments for this disorder.

Until recently, doctors could offer few options for patients with Marfan syndrome. The disease, which affects the bones, joints, eyes, heart, lungs, and blood vessels, can have serious complications, such as swelling of the base of the aorta and aortic tear (dissection), which can cause immediate death.

Scientists searched for years to uncover the disease’s biological underpinnings, but few treatments emerged. Frustrated by these limitations, Dr. Dietz, a physician, decided to become a researcher. Collaborating with others, he successfully mapped the genetic mutations that cause Marfan syndrome to a gene on chromosome 15. This gene encodes fibrillin-1, a connective tissue protein. Finding the gene was a critical step, but only the beginning of the researchers’ hunt.

After finding the culprit gene, many researchers were pessimistic: if the disease was simply the result of a lack of the fibrillin-1 protein, doctors would be unable to do anything for patients. But through the development of a mouse model for the disease, researchers learned that the fibrillin-1 protein binds to another molecule called TGF-beta, inhibiting its function. When fibrillin-1 is mutated, as in Marfan syndrome, TGF-beta goes unchecked. Blocking TGF-beta might be the key to treating the disease. A drug called losartan, FDA-approved for treating high blood pressure, does precisely that. In the mouse model of Marfan syndrome, the drug not only slowed swelling around the heart and other symptoms, but it also began to reverse them.

Clinical trials for losartan are now underway. Over 600 people with Marfan syndrome have been recruited for the trials, and each participant will be monitored for three years. In more recent work, the Dietz lab has been probing events that are downstream of TGFβ activity which weaken the aortic wall. In this manner, they have uncovered additional molecules and pathways that might offer additional treatment targets in the future. Researchers are also excited that they can now link the biological events leading to Marfan syndrome to diseases like bicuspid aortic valve, the most common congenital heart problem. Additionally, scientists are investigating losartan’s potential for treating muscular dystrophy, which, like Marfan syndrome, weakens the body’s muscles.

How tweet it is
Happy Robigalia! Applying genomic tools to thwart an ancient pest