The many faces of malaria 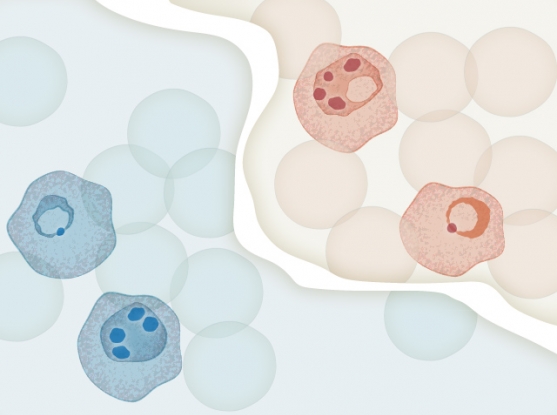 By Haley Bridger
Malaria isn’t simply one disease caused by one organism. Malaria, which the World Health Organization (WHO) estimates affected over 200 million people in 2010, can actually be caused by five different species of parasite, and depending in part upon which one has made its home inside a host,...

Malaria isn’t simply one disease caused by one organism. Malaria, which the World Health Organization (WHO) estimates affected over 200 million people in 2010, can actually be caused by five different species of parasite, and depending in part upon which one has made its home inside a host, symptoms of the disease can range from relatively mild to fatal.

To begin to crack open the biology of the disease, infectious disease researchers have sequenced and assembled reference genomes for two of the five malaria parasites — known as Plasmodium falciparum and Plasmodium vivax. P. falciparum, the first malaria parasite to have its genome sequenced, is the most deadly and most common. P. vivax, on the other hand, causes fewer deaths but has a much wider global range. Although rarely fatal, P. vivax can cause excruciating symptoms, including recurrent, high fevers.

Researchers at the Broad Institute are harnessing this information to attack malaria from many angles, looking for new ways to target this neglected disease. They are finding genomic hints about the causes of drug resistance and exploring the parasites’ genetic diversity in order to understand its spread as well as its strengths and weaknesses. Two recent papers in Nature Genetics and PNAS from Broad Institute investigators report the latest clues unearthed in the genomes of P. vivax and P. falciparum, respectively.

P. vivax has a large global range; it is capable of causing disease not only in tropical and sub-tropical regions where P. falciparum is present, but also in temperate regions. Up until the middle of the 20th century, P. vivax was present in Europe and much of the United States. In the decades since then, efforts to better control mosquitoes, including the use of insecticides and window screens, have helped interrupt transmission and cases of P. vivax associated malaria have died out in North America and Europe. P. vivax’s ability to be transmitted in temperate climates is due in part to its lifecycle. Unlike P. falciparum, it can lie dormant for years, hiding out in the liver of an infected individual until favorable (warm and wet) transmission conditions occur.

Neafsey and his colleagues wanted to understand the demographic history of P. vivax – how it spread across the globe. They were also interested in measuring the species’ genetic diversity. To do so, they sequenced four different strains, originally collected from various locations around the globe. They found substantially more genetic variation – both in single “letter” changes as well as larger stretches known as microsatellites – in P. vivax than had been detected in P. falciparum. This diversity could be problematic if researchers want to develop a vaccine against the parasite.

“If we’re serious about eradicating all of malaria, P. vivax shouldn’t be an after thought, but rather viewed as a particular problem that we’re going to need to deal with, perhaps using different means than we’ve used to control P. falciparum,” said Neafsey. Diversity, in addition to a long dormancy period, may complicate control efforts. “There’s always going to be a chance that there is an ember lying dormant in someone that will cause infection to reemerge after natural eradications efforts wrap up,” Neafsey explains.

Danny Park, a graduate research assistant in the Genome Sequencing and Analysis Program and in Broad associate member Pardis Sabeti’s lab, is also tackling malaria, albeit from a different direction. Park and his colleagues have focused on P. falciparum, whose reference genome has been available for about ten years. Many samples of this parasite have been genetically analyzed, but Park and his colleagues wanted to take a closer look at some of the techniques currently used to look for clues in the P. falciparum genome. In human genetics, researchers often use genotyping arrays – devices that allow them to quickly look at single “letters” or DNA bases at various sites in the human genome all at once. Even though not all of the DNA code is captured on these arrays, they can use computational methods to infer the missing information.

“Genotyping arrays are built on the assumption, which is true in humans, that you get to see most of the genome by looking at mutations at the sites you know about,” Park explains. “We did an analysis that showed that in malaria, this ends up not being true.”

In order to thoroughly understand what is happening in the malaria genome, Park and his colleagues found that researchers need to sequence the full genome, rather than sample various sites. Luckily, since the parasite’s genome is much smaller than the human genome, the cost of sequencing is reasonable.

“The human genome has peculiarities that make it easier to do certain things,” said Park. “For methods that were originally tuned for humans, we’re going to need to adapt them when we work on other organisms.”

Both Park and Neafsey’s groups have shared their findings openly with the malaria research community and will continue to pursue new avenues of investigation related to P. falciparum and P. vivax.

“We’ve started with a modest number of samples, but we’re scaling up rapidly,” said Neafsey, referring to the vivax work. “This may allow us to get to the bottom of the most interesting questions about the rise and spread of the parasite.”

Painting with cells
Delivering on a promise